The Roseanne revival, which premiered on ABC this week, didn’t just bring back a familiar set of characters. It also brought back a particular social climate from the 1990s — one in which the show’s star, Roseanne Barr, is at the center of a firestorm of conversation and criticism, fanned on by Barr herself. In recent months, a set of inclusive family sitcoms have been enjoying a moment, buoyed by writing and casting that helps bring life to real-world struggles. Because of her fame and her show’s past reputation, Roseanne‘s arrival threatened to create a power imbalance, making her the loudest voice in the room. Now that the show has premiered with dazzlingly high ratings, getting Barr a congratulatory call from President Donald Trump, it’s clear that’s come to pass.

Right now, everyone is paying attention to Barr. But it’s fair to ask quite how much of that voice actually determines the content of Roseanne. Barr, who used to be involved in almost every aspect of the show, has handed the reins to the performer and producer Sara Gilbert, who also plays daughter Darlene. “I wanted somebody else to do the work that I wasn’t good at, and to let me do the work that I was good at,” Barr told the New York Times. Just like Trump’s presidency, Roseanne’s vision, or at least what she controls of it, courts chaos and inconsistency. The star — whose messy vocalization of her beliefs offscreen have included conspiracy theories about the Parkland shooting survivors — is a powerful and widely-heard voice speaking on Trump’s behalf. The voice of her show is saying something a bit different.

Roseanne is pro-Trump, but Roseanne is more complicated. Its massive ratings suggest something about it suits our era, but that something is less the succor it provides to an underserved red-state audience than a sense of chaos. On-camera, the “Roseanne Conner” character is eager to pick fights over her vote for Trump in 2016. But she has no compelling explanation for why she cast it, but for a sense that the now-President was the candidate who could “shake things up” and bring back jobs. This seems like motivation enough; Roseanne herself is a provocateur, and the fact that later she goes on to indicate sensitivity toward un-Trump-administration causes (her affection for a grandson who exhibits gender fluidity, for instance) just goes to show how illegibly scrambled politics have become.

It’s interesting that the show gave her nothing more to back up her stance, and, indeed, went on to show her as a bully and a force of division in her family. In the premiere, she hasn’t spoken to her sister for a year because of their diverging 2016 votes. On Roseanne, a Trump voter is examined at length, and found to be what Roseanne fans always knew her to be: a pushy bully who’s allowed differences of opinion to subsume her personal life. Roseanne was always depicted with some ambiguity—she was a caring but brusque and at times cruel mom and partner. The addition of political commentary keeps with that spirit. Roseanne shines a light on Trump voters, sure, but I didn’t find it a particularly flattering one.

Much will be revealed in the weeks to come — whether those audiences who sampled Roseanne in its first outing since 1997, many of them in “flyover” markets like Tulsa and Cincinnati, stick with the show, for one thing. And once the story moves on from its premiere’s Trump supporter-vs.-Clinton supporter dynamic, it stands to be perhaps far less congenial to Trump. After all, the premiere at least had someone saying nice things about the president on air. An episode later in the season takes on opioid abuse and substandard medical insurance, as much a hallmark of 2018 America as arguing about a two-year-old election, and one that raises even bigger questions about what those running the country are or are not doing.

A Trump-voting, blue-collar woman dominating the TV ratings is a big deal, and surely many people watching her are doing so because they share her point-of-view. But I suspect in the long run they’ll be confused and disappointed by Roseanne Conner, whose swirl of loyalties — to the President, to her grandchildren, to metabolizing the state of the world through her own idiosyncratic point of view — make her a far more interesting thinker than the doctrinaire performer who plays her. Are her ideas interesting enough to sustain years more of conversation at the current pitch, or coherent enough to engage in good-faith debate? No. But it’s their frustrating lack of logic that makes them an elegant comment on the era in which we live, a document that the President has no reason to cheer. 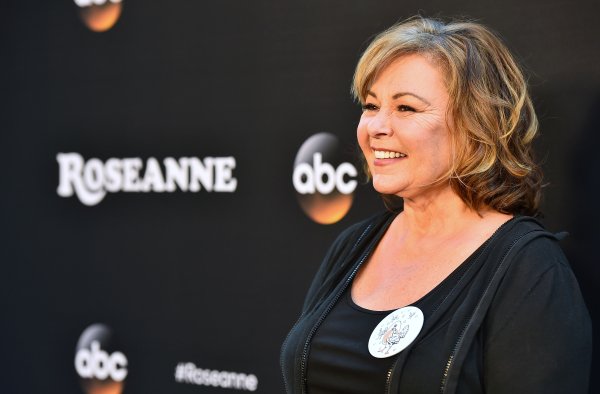 Why Roseanne's Massive Ratings Are a Big Deal for TV
Next Up: Editor's Pick