Cheetahs Board Jeep to Get In On the Full Safari Experience

Safaris are unpredictable. After all, visitors are out there on the hunt for nature’s wildest creatures. But one recent safari group in the Gol Kopjes in the Serengeti had an even more heart-stopping experience than most: a pack of cheetahs appeared to board their vehicle while they were observing them.

Britton Hayes was spending the day game-watching as usual when his jeep came upon a family of cheetahs on the hunt. As is protocol on safaris, the vehicle came to a stop to silently observe the creatures in their natural habitat. But apparently the cheetahs were just as interested in observing the humans — because, while one of them jumped atop the car, another hopped into the backseat.

“Honestly, it was probably one of the scariest moments of my life while it was happening,” Hayes told KOMO News. “I felt like I had to clear my mind of any thoughts because from everything you’re told about predators like that, they can sense fear and any sort of discomfort you’re feeling and they’ll react accordingly.” Luckily, Hayes said their guide helped the group stay calm throughout the close encounter, and they eventually carried on with their trip unscathed. The Gol Kopjes are known for the high population of cheetahs, but this tour group got more than they bargained for.

Watch the wild interaction above. 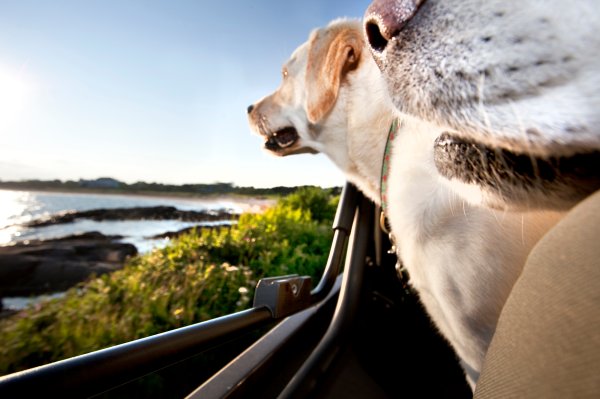 This Man Rescued a Pair of Abandoned Dogs. Now They're All Taking a Cross-Country Road Trip.
Next Up: Editor's Pick