Thanks to shows like Westworld, Black Mirror and Star Trek: Discovery earning both legions of fans and critical acclaim, we may be living in a golden age of science fiction television. Its popularity is understandable, given our collective anxiety about all manner of potential technological terrors—artificial intelligence and robots (and the combination of the two!) not least among them. Netflix attempts to tap into that trend with Lost in Space, a modern reincarnation of a beloved 1960s camp classic centered around a robot’s interactions with humans.

As with the original, Lost in Space deals with the Robinson family, who leave a doomed Earth to join a colonist mission to Alpha Centauri. Their ship, the Resolute, is compromised along the way and sent wildly off course. We first meet the Robinsons midway through their evacuation procedure, which leaves them stranded on what they quickly learn is a hostile world.

It’s not long before the young Will Robinson (Maxwell Jenkins) a brilliant but skittish tween, bonds with an alien robot capable or remarkable feats. While the Robot appears to do his bidding, Will doesn’t know exactly how to control it—and nobody is sure whether to trust it. Will’s mother, Maureen Robinson (Molly Parker), and estranged father, John Robinson (Toby Stephens), have their doubts about the Robot’s intentions, but based on the machine’s feats of strength, neither parent seems to have any option but accept its presence.

In that way, the “Robot” becomes a walking metaphor for our struggle with modern technology. We may have our doubts about Silicon Valley’s endless thirst for our personal data, or whether it’s a good idea to let driverless cars roam the streets. But we feel largely powerless against Big Tech, so we accept its increasingly invasive presence in our lives and our homes and move on—even as a voice in our head cautions: Danger, Will Robinson!

The Robinsons aren’t reliant on technology to perform their own feats of brilliance. As trained space settlers, the family members have already passed physical and mental tests, and possess special skills: one is an astronomer, another a medic, still another a military man. That leads the early episodes to lean on the repeated stunts of geniuses saving other geniuses, which threatens to wear thin pretty quickly.

But the show gets more intriguing as it reveals the Robinsons are not as perfect as we are first led to believe. It is further rescued by a pair of characters outside the Robinson family who, while crafty enough, have not passed the tests to become colonists. Among them is Dr. Smith (Parker Posey), a pathological master of self-preservation whose machinations jeopardize all those around her. Played by fan favorite Jonathan Harris in the original series, the scene-stealing Posey more than does the character justice. That we learn in a series of flashbacks about some of the Robinsons’ moral misgivings helps matters, too.

It’s too soon to say whether Lost in Space will be TV’s next great sci-fi spectacle. The show is trying to balance family drama with science fiction, a challenging task. In its first episodes, Lost in Space spends too much time on the former to be truly satisfying for fans of the latter. But the show seems to be headed in the right direction. If it doesn’t get lost along the way, that is. 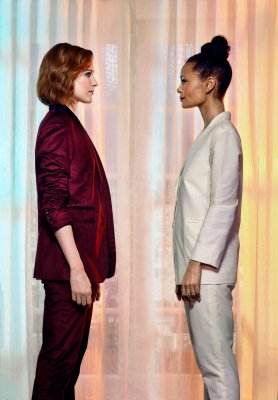 Westworld Is Finally Back. And Its Women Are Ready to Take Over
Next Up: Editor's Pick