Justice Stevens Wants to Repeal the Second Amendment. Here’s Why That's So Hard

Retired Supreme Court Justice John Paul Stevens drew attention Tuesday when he argued for the repeal of the Second Amendment, which protects the right to bear arms. But many gun control supporters say they don’t want to go anywhere near the idea.

From a technical standpoint, the already-difficult path to pass a constitutional amendment is complicated by the current Republican domination of state legislatures. And from a strategic standpoint, they fear that the push for an amendment would only rile up gun supporters, making it more difficult to get legislation passed.

“That’s a very difficult challenge in the best of times; it’s even more difficult in the current times,” Turley said, noting that there is still a high level of support for Second Amendment rights across the country. “The chances of securing two thirds of both houses [of Congress] is rather remote, and the chances of securing ratification of 38 states is virtually nonexistent.”

Republicans, who typically run on a platform of supporting gun rights, currently control 32 state legislatures, per data from the National Conference of State Legislatures. Even assuming that the 18 states that have either divided or Democratic control backed an amendment, they would still need 20 GOP-controlled states to support the proposal in order to pass.

And even if state legislatures and Congress had the votes to repeal the Second Amendment, there is a very real political risk to actually doing it, especially for those advocating for gun control reform. Gun control advocates frequently stay away from the notion of repealing the Second Amendment; there’s never been a major push for it from Sens. Dianne Feinstein and Chris Murphy, both of whom have led the charge in pushing Congress to implement stronger gun control laws, or from advocacy groups like the Brady Campaign or Everytown for Gun Safety.

“The courts have overwhelmingly ruled that there is no inconsistency between 2nd Amendment rights and reasonable, common sense gun safety laws, and states are already stepping up to protect people from gun violence,” said John Feinblatt, president of Everytown. A spokesman for the Brady Campaign reaffirmed that, “the Supreme Court was in agreement that the Second Amendment allows for the common-sense gun reforms that the Brady Campaign and most Americans support.”

The Second Amendment is a sticking point because, for most gun owners, the debate is not necessarily about guns but about the right to own a gun that is explicitly enshrined in the Constitution. This dynamic is precisely why membership and donations to gun rights groups often spike after a mass shooting, when calls for gun control grow louder. A movement to repeal the Second Amendment would only compound these sentiments.

“Without the provision of the Second Amendment, without the fact that the colonists had a right to keep arms, we would be singing Hail Victoria and saluting the British flag,” Richard Shackleton, an attorney and NRA member from New Jersey, told TIME last October after the shooting at a Las Vegas music festival killed over 50 people and wounded nearly 500. “The fact is that armed people are a free people,” he said.

Shackleton’s fears are reflected in the statement issued by Chris Cox, the executive director of the NRA’s Institute for Legislative Action, who said that Stevens’ article shows the real motive of gun control advocates is to take away weapons.

“Emboldened by the mainstream media, the gun-control lobby is no longer distancing themselves from the radical idea of repealing the Second Amendment and banning all firearms. The protestors in last week’s march told us with their words and placards that the current debate is not about fake terms like “commonsense” gun regulation. It’s about banning all guns,” said Cox. 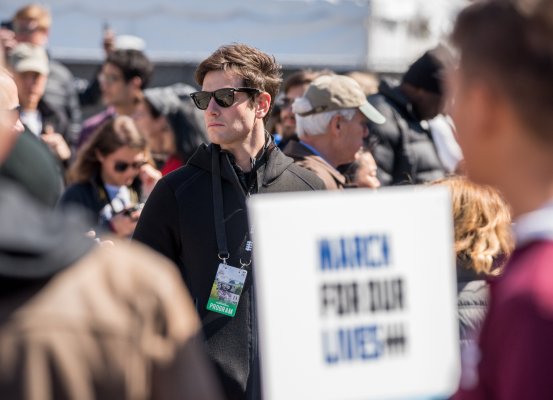 Jared Kushner's Brother Was At the March For Our Lives in Washington, D.C.
Next Up: Editor's Pick