Dear Royal Baby: Being the Youngest Child Comes With Some Surprising Advantages

I was going to buy you a gift, I really was, something that would be waiting for you whenever you arrive. But when your biggest gift on your first day on Earth is going to be your own share of The United Kingdom of Great Britain and Northern Ireland and Other Realms and Territories Beyond the Seas, it’s pretty hard to move the needle with a Tickle-Me Elmo doll. So I’ll settle for offering advice instead.

There’s no denying that you’re going to go through life feeling special (yes, that really is great-grandmum Queen Elizabeth II on the money). But from the moment you come home from the hospital with mum (Kate Middleton) and dad (Prince William), you’re going to feel exceedingly unspecial too. That’s because there will be a couple of other royal kids waiting for you—you’ll come to call them George and Charlotte—and they’ll have, well, mixed feelings about your arrival.

Your position in the family—royal or not, fifth in line to the throne or not—will be as the youngest sibling in a three-child brood, and that’s a job description that comes with some challenges. Even among the unroyal, first-borns—Prince George, in your case—have a huge edge. They are the first products off the parents’ reproductive assembly line and all of the family’s R&D resources—money, time, attention—are poured into them.

That’s a pretty sweet deal and it pays pretty sweet dividends. First-borns across history have tended to be taller, healthier, better educated and ultimately richer than younger siblings. They are likelier to inherit the family business—that United Kingdom of Great Britain and so forth, for example. Their IQs are even a few points higher than their little siblings’.

Often though, they have to fight to hold on to those goodies, beginning when the second-born—Princess Charlotte, in your case—comes along. In the privacy of the nursery she may talk a good line: she’s a loyal member of the royal family and just wants to do her part to keep the old institution going. Don’t believe her. Evolutionarily, second-borns are insurance policies, backup systems for parents who have already done the work of reproducing their genes. There’s a reason the first job of a royal Mum is said to be to produce “an heir and a spare.” (Handy Holiday dinner tip: Don’t bring up that term around your Uncle, Prince Harry.)

Second-borns feel that humbler status, which is why, from the moment they arrive, one of their primary motivations is to upset the existing order. It’s not for nothing that younger siblings are forever ratting out older ones. It’s not for nothing that they’re so diabolically good at provoking their bigger, stronger brothers and sisters, knowing that when a fight breaks out—and it always will—it’s the baby of the family the parents will swoop in to protect.

Things only get worse when the third-born—you in your case—arrives. By now, the oldest child, who once got 100% of the parents’ attention, is down to a third of that. The second-born must get by on similar starvation rations and, worse, is suddenly bumped to dreaded middle child status. Walk into a nursery where you’ve already caused that kind of upheaval and you’re lucky if you walk out again.

A few things will ensure your survival. For starters, you did your sister Charlotte a big favor by being born a boy, which means she will resent your arrival a lot less. The old notion of middle children becoming the forgotten chick in the family nest is not just a notion. Multiple studies have found that they do get less parental attention than the oldest and youngest, and may wind up with self-esteem issues in adulthood as a result. In a three-child family, it thus helps a lot if the person in the number-two role is of a different gender from the other two. Charlotte, as the family’s sole princess between a pair of princes will get a lot more attention than she would have if you had been a princess too.

Your baby-of-the-family status will pay off as well. Humans are hopelessly drawn to neoteny—the kissable, squishable, button-nosed, big-eyed, irresistibility of babies—and your parents will generally have your back. Cuteness, however, will get you only so far with Prince George and Princess Charlotte, who have their own adorableness capital to spend.

To handle them, you’re going to have to develop a particular kind of smarts. Last-borns in most broods exhibit what scientists call low-power strategies, personality traits that can help them survive being the smallest and weakest person in the room. Studies show that the runts in human litters tend to be better than their older siblings at reading moods and expressions, and thus at intuiting what’s in other people’s minds—a handy skill to have if you want to duck a punch before your big brother throws one. They also tend to be straight-up funnier than their bigger siblings—also valuable since there’s nothing more disarming than being able to make another person laugh. Celebrated wits like Voltaire, Jonathan Swift and Mark Twain were among the youngest members of large families. American funnyman Stephen Colbert (sorry, you’ll need satellite) is the youngest in a brood of eleven children.

But there are dangers to the last-born personality too. Like your sister Princess Charlotte, you’ll always be looking for ways to overturn the family’s power structure. In most stable families that’s not possible, so last-borns find other ways to become risk-takers and china-breakers. They are statistically likelier, for example, to play full-contact sports like hockey, than safer ones like tennis. In business, they tend to take more chances—the incoming CEO who blows up a company’s systems and starts over instead of simply streamlining and improving things. One study even found that when siblings engage in political demonstrations, it’s the last-borns who are likelier to get arrested.

Odds are pretty good you won’t wind up on the barricades, of course, and the particular business you’ll be helping to run hasn’t been radically reimagined since 1215 or so. Still, like all last-borns, you’ll learn that the parliament of the playroom will require its own kind of negotiating, deal-making, and politicking. The good news is, if your sibling brood is like most, you’ll usually find a way to make peace across the aisle. 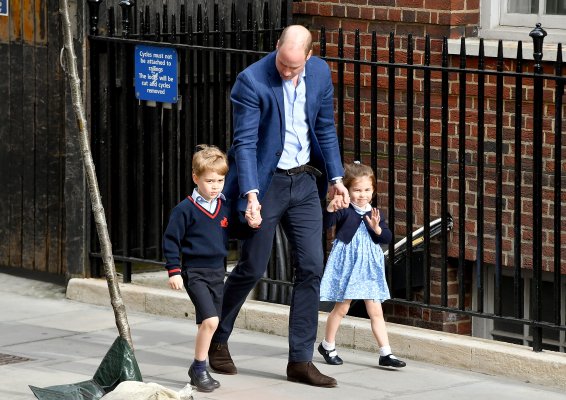 Prince George and Princess Charlotte Made a Hospital Visit
Next Up: Editor's Pick