In an op-ed published in the New York Times Tuesday, the 97-year-old former Supreme Court justice argues that advocates for stricter gun control legislation should take the next step and demand the removal of the Second Amendment entirely.

“That simple but dramatic action would move Saturday’s marchers closer to their objective than any other possible reform,” Stevens, who was appointed by former President Gerald Ford and was then a registered Republican, wrote. “It would eliminate the only legal rule that protects sellers of firearms in the United States — unlike every other market in the world. It would make our schoolchildren safer than they have been since 2008 and honor the memories of the many, indeed far too many, victims of recent gun violence.”

The long-serving Supreme Court justice, who retired at the age of 90 in 2010, had the op-ed published just days after student survivors of the recent mass shooting in Parkland, Fla. led the March for Our Lives in Washington, D.C., and hundreds of other cities around the world to demand an end to gun violence.

“Rarely in my lifetime have I seen the type of civic engagement schoolchildren and their supporters demonstrated in Washington and other major cities throughout the country this past Saturday,” Stevens wrote in the opening line of the op-ed.

Most students and advocates pushing for gun control have not gone as far to say the Second Amendment should be repealed entirely. Instead, gun control activists have pushed for the increase of the minimum age to buy a gun from 18 to 21, the implementation of more background checks and the barring of civilians from owning semiautomatic weapons, as Stevens notes.

The former Supreme Court justice also cited the 2008 Supreme Court ruling District of Columbia v. Heller, which affirmed the Second Amendment protects the right of an individual to own a firearm without serving in a militia. Stevens, along with retired Supreme Court justice David Souter and sitting justices Ruth Bader Ginsburg and Stephen Breyer, dissented from the majority opinion in that case.

“Overturning that decision via a constitutional amendment to get rid of the Second Amendment would be simple and would do more to weaken the NRA’s ability to stymie legislative debate and block constructive gun control legislation than any other available option,” Stevens wrote.

The long-serving Supreme Court justice, who left the court at the age of 90 in 2010, has pushed liberal issues throughout his retirement. He has advocated for the abolishment of the death penalty and the legalization of marijuana, among other causes. His 2014 book Six Amendments: How and Why We Should Change the Constitution proposed, among other changes to the Constitution, the rewriting of the Second Amendment to instead read: “the right of the people to keep and bear arms when serving in the militia shall not be infringed.”

Indeed, there has only been one successful attempt to repeal an amendment in American history. That happened in 1933 with the passage of the 21st amendment, which repealed the 18th amendment, thus ending the prohibition of alcohol.

Correction: The original version of this story misstated Justice John Paul Stevens’ age. He is 97, not 98. 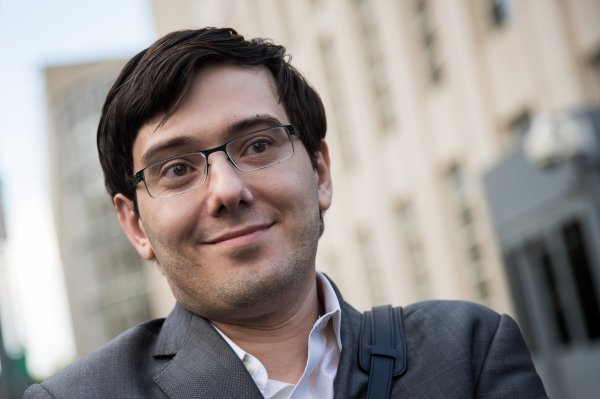 Martin Shkreli Was Just Ordered to Forfeit Nearly $7.4 Million to the U.S.
Next Up: Editor's Pick