Apple Just Announced a New Cheaper iPad. Here's What to Know About It

In a move to challenge Google and Microsoft’s dominance in the classroom, Apple is releasing a new 9.7-inch iPad geared toward students, the company announced Tuesday during a press event at Lane Tech College Prep High School in Chicago.

Apple will sell the new iPad for $329 at retail, but schools will be able to purchase it at a lower price of $299. It’s available to preorder immediately and will arrive in stores later this week.

This new iPad will support the Apple Pencil, the stylus accessory that, until this point, was only compatible with the company’s more expensive iPad Pro tablets. The new iPad will have an eight megapixel camera, a Touch ID fingerprint sensor, and up to 10 hours of battery life. It will be powered by Apple A10 Fusion chip, the same processor found in the iPhone 7 and iPhone 7 Plus.

Apple will also release new versions of its Pages, Numbers, and Keynote apps that support the Apple Pencil, which means iPad owners will be able to use the Pencil to write within these apps. Pages, for example, will be getting a new Smart Annotation feature for marking up documents. Comments will be anchored to specific text so that notes stick even when the document has been edited.

Apple is also adding a couple of other bonuses for students. Schools will get 200GB of iCloud storage instead of 5GB, and will have the option to buy the Apple Pencil for $89 instead of $99. There’s also an Apple School Manager program for creating Apple IDs for every student so that it’s easier to share tablets in the classroom.

The launch marks Apple’s biggest iPad education initiative since it struck a partnership with the Los Angeles Unified School district in 2013. That program fell apart largely because of problems with the educational software on the iPad, which was supplied by Pearson, according to The Los Angeles Times. This time, Apple is offering some new software of its own to make the iPad more useful in the classroom. One way Apple is doing this is through a new app called Schoolwork, which makes it possible for teachers to virtually dole out learning materials to students and see their progress on assignments.

The announcement comes as Google and Microsoft are also releasing new technologies and products designed with students in mind. Acer and Google on Monday debuted a new tablet powered by the search giant’s Chrome OS software called the Chromebook Tab 10, just ahead of Apple’s iPad unveil. Earlier this year, Microsoft introduced a $189 Lenovo PC designed for the classroom.

If Apple hopes to establish a significant presence in schools, it will have to catch up with Google and Microsoft. Google’s Chrome OS devices accounted for 59.6 percent of device shipments in the kindergarten through 12th grade U.S. market in the fourth quarter of 2017, according to market research firm Futuresource Consulting. Microsoft’s Windows platform, meanwhile, lead the global market with 43.5% of shipments in 2017.

Apple’s push into the education market also comes after it’s been positioning the iPad as more of a work-oriented tool in recent years. When Apple unveiled its new operating system for its mobile devices last year, it flaunted new productivity features for the iPad such as a file manager app and a refreshed app dock that could fit more programs than before. With that in mind, making more of an effort to market the iPad as an educational tool seems like a sensible move. 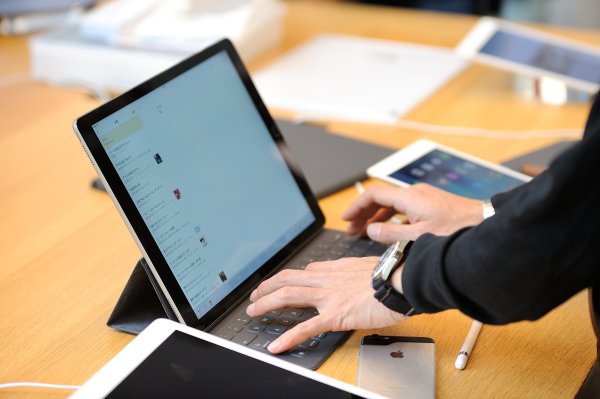 Apple Is About to Release a Cheaper iPad to Take on Microsoft and Google
Next Up: Editor's Pick