A rare phenomenon that occurs just once about every five years is turning the snow orange in eastern Europe.

The orange snow is a result of sand storms from the Sahara Desert mixing with rain and snow, according to the BBC.

People have taken to social media to post photos of the orange-tinted snow, which is falling in countries like Russia, Ukraine, Bulgaria and Romania. Skiers posted photos of the colored snow at a resort near Sochi, Russia.

Steven Keates, a meteorologist who works for the U.K.’s national weather service, known as the Met Office, told The Independent that the orange snow is caused by sand being lifted up into the upper layers of the atmosphere and spreading out due to the wind and weather patterns.

“There has been a lot of lifted sand or dust originating from North Africa and the Sahara, from sand storms which have formed in the desert,” he explained to the U.K. newspaper. “Looking at satellite imagery from Nasa, it shows a lot of sand and dust in the atmosphere drifting across the Mediterranean. When it rains or snows, it drags down whatever is up there, if there is sand in the atmosphere.”

Keates also said the orange snow phenomenon has previously been seen in other regions around the world.

Check out these photos of the orange snow in Russia: 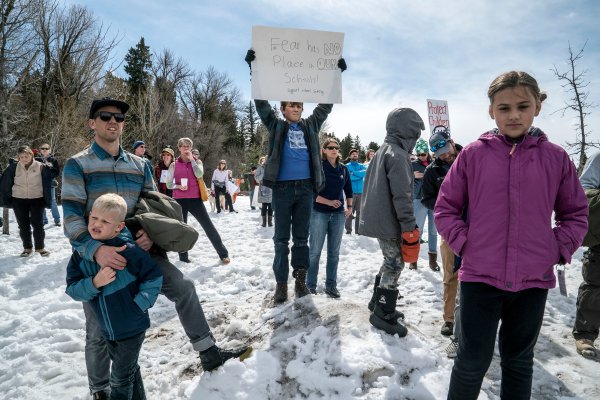 Scenes From the March For Our Lives Rallies Around the World
Next Up: Editor's Pick