Donald Trump Wanted a Trade War. Here's What One Looks Like

In a two-week span, President Donald Trump ordered up an array of tariffs against numerous countries, blocked Chinese takeovers of U.S. companies and sought new restrictions on future Chinese investment. China responded with tariffs of its own on imports of 128 U.S. goods. Economists are warning that the world is on the verge of an all-out trade war, featuring tit-for-tat reprisals, heated rhetoric and appeals to the World Trade Organization, which may be ill-equipped to respond.

The dictionary says it’s “an economic conflict in which countries impose import restrictions on each other in order to harm each other’s trade.” Trump’s tariffs and the threatened retaliation from other countries meet this definition, but so do centuries of protectionist skirmishes by numerous countries in countless sectors. The recent escalation is stoking fears that Trump has set off a full-blown trade war by singling China out for retaliation for intellectual property theft. The quid-pro-quo actions by the U.S. and China over steel tariffs, Trump’s invocation of national security to justify some of his moves — which could open a Pandora’s Box of similar claims by other nations — and Trump’s threat to further punish the EU if it imposes counter-duties also add to the trade-war atmospherics.

2. What happened in previous trade wars?

One of the most notorious examples is the Smoot-Hawley Act passed by Congress in 1930 and often blamed for deepening the Great Depression. The law hiked U.S. tariffs by an average of 20 percent, initially to protect American farmers but then broadened as other industries lobbied for protections. As demand collapsed, countries scrambled to maintain their gold reserves by devaluing their currencies or imposing even more trade barriers. Global trade fell off a cliff.

No one, if history is any guide. When President George W. Bush raised steel tariffs in 2002, U.S. gross domestic product declined by $30.4 million, according to the U.S. International Trade Commission. The U.S. lost about 200,000 jobs, about 13,000 of which were in raw steel-making, by one estimate. A report by the pro-free trade Peterson Institute for International Economics estimated that Bush’s tariffs cost about $400,000 for every steel-industry job saved. The World Trade Organization also ruled that the Bush tariffs were illegal.

4. What has Trump done so far?

He’s imposing tariffs on $50 billion of products imported from China in retaliation for what he calls decades of intellectual property theft. He imposed tariffs of 25 percent and 10 percent, respectively, on steel and aluminum imports, which prompted China to say it could hit back with tariffs of its own. While he temporarily exempted allies, including the European Union, from the metals tariffs, he expects them to grant concessions to the U.S. to maintain the exemption.

5. Why did Trump invite this fight?

In a March 2 Twitter post, he declared trade wars “good, and easy to win.” His focus remains reducing the U.S. trade deficit, which shows the country imports hundreds of billions of dollars more than it exports. Stepping back from trade deals like the North American Free Trade Agreement and the Trans-Pacific Partnership also appeals to Trump’s base of voters in America’s Rust Belt. But talk of a trade war is alarming to many U.S. business leaders, who largely support existing trade deals, and the securities markets, which fear lower profits and slower economic growth if the U.S. turns protectionist and other countries retaliate.

China hit $3 billion of U.S. wine, fruit, pork, steel pipe and other exports with tariffs on April 2. Many of the 128 products on the list originate from states that favored Trump in the 2016 presidential election. After the U.S. announced details of its tariffs on $50 billion of Chinese imports, China said it would retaliate against U.S. products “equivalent in scale and degree to the U.S. measures.” On April 4, it announced tariffs against U.S. soybeans, chemicals and aircraft. Now the big worry for the U.S. is that China, the U.S.’s biggest creditor, will scale back purchases of Treasuries in retaliation. China’s ambassador to the U.S. doesn’t rule out the option. Other countries haven’t retaliated for the steel and aluminum tariffs, which took effect March 23, largely because Trump temporarily exempted many of them. Still, the EU is unhappy and warned it will respond with its own 25 percent tariffs on $3.5 billion of American goods. Like China, the EU says it will focus particularly on products from states that are part of Trump’s political base, including iconic U.S. brands of motorcycles, blue jeans and bourbon whiskey. In turn, Trump warned that he would impose a 25 percent penalty on European car imports if the EU carried out its threat.

7. When does the WTO get involved?

The U.S. took the first step on March 23, filing a “request for consultations” with China at the WTO on technology licensing. China also notified the WTO how it could respond to the steel tariffs with levies of its own, later adding later that it will challenge the legality of the broader tariffs, which it said were a “gross violation” and put the WTO in “unprecedented danger.” But retaliatory actions that unfold quickly can test the WTO’s somewhat ponderous deliberative process. The arbiter of international trade disputes was born in 1995 out of a set of agreements struck by countries trying to reduce trade barriers. If a government’s complaint about another nation’s trade barriers is seen as grounded, the WTO recommends acceptable retaliation. In the case of steel, Trump is invoking a seldom-used clause of a 1962 U.S. law that gives him the authority to curb imports if they undermine national security. Under WTO rules, countries can take trade actions to protect “essential security interests.” Other nations could challenge the validity of the U.S. use of that clause. They also could copy the U.S. move by citing national security to block imports themselves.

8. Could tariffs backfire on the U.S.?

Yes. Take steel tariffs. Many more people are employed in industries, such as auto manufacturing, that buy steel to make products, than in steel-making itself. Some consumers may also have to pay higher prices. Trade tensions could boost inflation more than desired by Federal Reserve policy makers, who might feel the need to raise rates more aggressively than planned. On the other hand, if the tariffs result in job losses and the economy slows, the Fed might want to ease the pace of rate hikes.

9. Are tariffs the only weapon in trade wars?

No, there are many others. Clamping down on Chinese investments in the U.S., which Trump is already doing, is one example. Talking down, or manipulating lower, one’s currency is another. Countries through the years have used other means to keep foreign goods out and protect homegrown companies, a practice known as mercantilism. Trump accuses China of using government subsidies to prop up its domestic industries. Some practices are overt, such as quotas, and others covert, such as unusual product specifications, lengthy inspections of goods at entry ports and intricate licensing requirements. 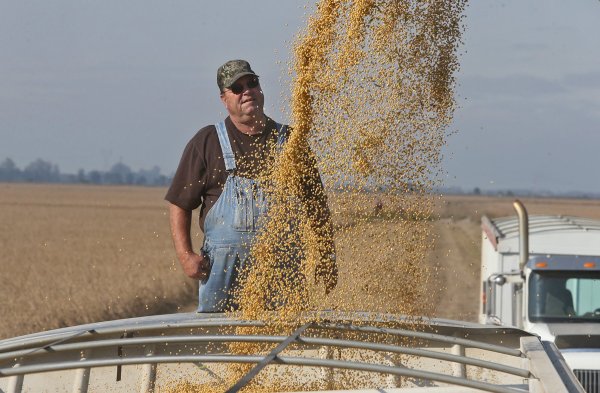