More Than 150 Florida Shooting Survivors Attended March For Our Lives. Here's How It Felt for Them

Wielding handmade posters and their anger after the deadly Florida school shooting, hundreds of thousands of protesters piled into the nation’s capital and other major American cities Saturday to demand an end to gun violence during the highly anticipated March For Our Lives rally.

Crowds of students from across the country converged in cities like Washington, D.C., New York City, Boston, Chicago, Los Angeles and Portland to take a stand against what they believe are lax gun control laws after 17 students and faculty members were killed in a mass shooting at Marjory Stoneman Douglas High School in Parkland last month.

More than 150 student survivors from Stoneman Douglas were among the demonstrators in Washington, D.C., where the crowds stretched from the foot of the U.S. Capitol to the White House, according to Jose Iglesias, a peer counselor at Stoneman Douglas. Dozens of Parkland students flew to Washington, D.C. on at least four different planes Friday. Many awoke Saturday morning from their hotel rooms bubbling with energy and optimism.

“I’m feeling excited for this,” said Iglesias, 17. “We’re actually making changes. No one thought we could do this because we’re students. We’re students, but we know what we’re doing. We’re the generation that’s going to make change.”

At the foot of the stage, where superstars like Ariana Grande and Jennifer Hudson performed, 16-year-old Jack Macleod stood in anticipation with seven other Parkland students and his 20-year-old sister, who had graduated from Stoneman Douglas.

“We’re getting people rallied up,” he said. “We’re all ready.”

After the rally ended about 3:30 p.m. local time, while walking back to their hotel, Jack and his friends felt more empowered than before. “People are thinking this is the peak of the moment, and it most certainly isn’t,” he said. “I hope everybody’s rage and energy increases exponentially from here on now. This is part of a new kind of America. We’re going to be old enough to vote and then run for office.”

While watching her classmates take the stage, Alyson Sheehy, a yearbook editor at Stoneman Douglas, said she felt hopeful. “The only thing going on in my mind was, we did this,” she said.

Several Parkland students at the march wore bright orange tags on their clothes that said $1.05 — the cost they say they’re each worth to Florida Sen. Marco Rubio, after dividing the amount of money Rubio apparently received from the National Rifle Association by the number of total students in Florida. The NRA was portrayed as a common villain by many marchers at rallies across the country.

“In the past, if the NRA didn’t own the politicians, we would have seen gun reform years ago,” said Janice Williams, 57, who traveled to the nation’s capital from Boston. “My youngest has been out of college for two years and she’s spent her entire life learning how to do lockdowns. It shouldn’t be this way.”

Parkland student Aalayah Eastmond, 17, said she was inspired to march in D.C. after feeling outraged and frightened about school safety. “Me, personally, I’m petrified,” she said. “Nothing has changed security-wise. The fact that students can still come on campus with a knife — that’s petrifying.”

Cries for change were also heard in New York City, where demonstrators chanted, “Hey ho ho! The NRA has got to go!”

“Every time someone goes on the announcements, I think it’s going to be a lockdown, and it’s just really scary being at school,” said Julie Korgen, an 18-year-old high school senior from Montclair, N.J. “I don’t want to die at school.”

—With reporting by Nash Jenkins/Washington, D.C. and Alana Abramson/New York 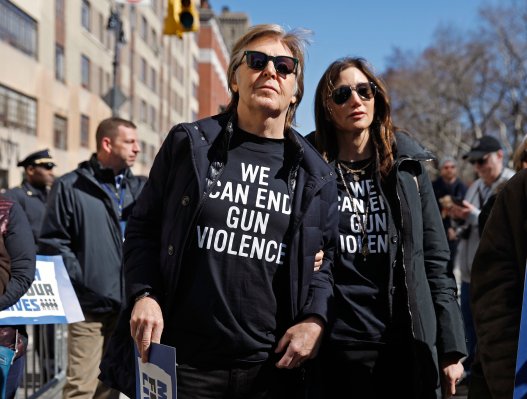 'One of My Best Friends Was Killed in Gun Violence.' Paul McCartney Honors John Lennon at March For Our Lives
Next Up: Editor's Pick