Drew Barrymore Ranked Jake Gyllenhaal as Her 'Least Talented' Co-Star. Here's How She Reassured Him of Her Love.

Drew Barrymore showed some major love to her former co-star Jake Gyllenhaal on Thursday after ranking him the “least talented” of her past co-stars.

The actress reassured the world and Gyllenhaal of her affection for him with a sign that read “I [heart] Jake Gyllenhaal” as she walked the red carpet at the season 2 premiere of her Netflix series Santa Clarita Diet. The declaration came after Barrymore appeared on The Late Late Show with James Corden, where she was asked to rank co-stars Adam Sandler, Hugh Grant, and Jake Gyllenhaal in order of best to worst or eat a turkey testicle.

“Jake Gyllenhaal so I don’t have to eat a turkey’s ball,” she said. “When I run into him next time, I’ll be like, ’Dude, it was like selling you down the river or eating turkeys’ balls.’ And by the way, I don’t even care if he hates me. I literally am doing this because I just won’t make it. I’ll say, Adam, Hugh, Jake.”

Barrymore has appeared in multiple movies with Sandler including cult classics like The Wedding Singer and 50 First Dates, while her film with Gyllenhaal, Donnie Darko, was early on in his film career. 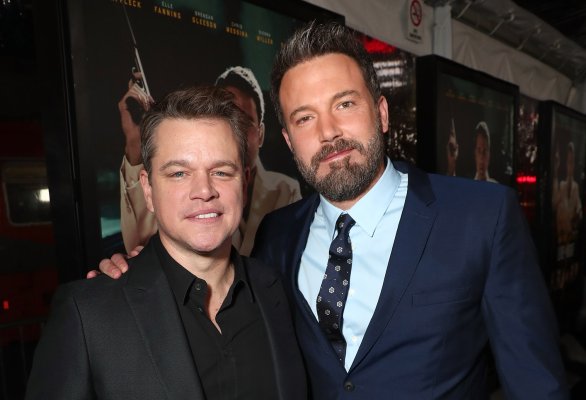 Matt Damon Defends BFF Ben Affleck's Right to Tattoo His Own Back However He Wants
Next Up: Editor's Pick