Historians have resolved a 70-year-old mystery surrounding USS Indianapolis and the number of World War II troops who survived when the Navy cruiser was torpedoed by the Japanese on July 30, 1945.

The sinking of the ship, which went down in under an hour, has been called the U.S. Navy’s worst-ever disaster at sea. Out about 1,200 crewmen aboard, it was long believed that 880 sailors and Marines lost their lives during the attack itself or in the water following the ship’s sinking, due to extreme conditions including shark attacks, dehydration and saltwater poisoning.

However, thanks to new research by the Naval History and Heritage Command’s Histories and Archives Division, officials have since confirmed that 879 people died following the attack on USS Indianapolis. In addition, the number of people who survived is 316, as the Navy has long said, and not 317 as some have posited over the years.

The problem was always a matter of math. Now, the reason the number of survivors was revised downward by one is that the total number of people on board was revised too, from 1,196 to 1,195. A search of available public records found that Clarence William Donnor (pictured below), a Navy radio technician believed to have been among the Indianapolis crew, had continued to serve until he was discharged in 1946. But he wasn’t a 317th survivor. In fact, he had not been on the ship in the first place.

Personnel file photo of Clarence Donnor, who was mistakenly believed to have been aboard the USS Indianapolis (CA-35) when she was sunk by a Japanese submarine on July 30, 1945.
U.S. Navy photo/Released

Even though Donnor’s parents informed that Navy that their son was still alive, the initial clerical error remained in the historic Navy lists with no explanation, according to new a paper produced by historians Richard Hulver and Sara Vladic.

This recent review of the number of people who perished following the disaster was ordered by the director of the Naval History and Heritage Command, following the discovery of the USS Indianapolis wreck last summer.

A research vessel owned by Microsoft co-founder Paul G. Allen discovered the wreck in the Philippine Sea, 5,500 meters below the surface on Aug. 19. The ship, which remains the property of the U.S. Navy, was left undisturbed by Allen’s team following the discovery.

Correction: The original version of this article misstated the division that conducted the research regarding the USS Indianapolis. It was the Naval History and Heritage Command’s Histories and Archives Division, not the Communication and Outreach Division. 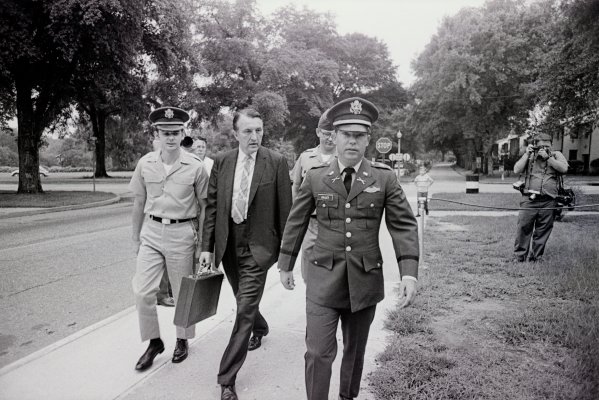 Only One Man Was Found Guilty for His Role in the My Lai Massacre. This Is What It Was Like to Cover His Trial
Next Up: Editor's Pick