Never fearing a fight, John Bolton’s decades-long resume in government has been defined by a distaste for treaties, contempt for diplomatic niceties and an ambivalence for the need to get along.

His deep-seated belief to maintain a hard-line approach toward adversaries once inspired his colleagues to give him a bronze-plated hand grenade as a trophy to celebrate his reputation as a bomb thrower. Bolton for years proudly displayed it on a coffee table in his Washington office.

Now he will help shape the next phase of foreign policy as President Donald Trump’s next national security advisor at one of the more tumultuous times in recent American history.

“It’s always an honor to serve our country, and I think, particularly, in these times, internationally, it’s a particular honor,” Bolton said in an interview on Fox News, where was a frequent a contributor.

The latest shake-up at the White House is likely to have an immediate impact, particularly on North Korea and Iran. Bolton has made the public case to go to war with both nations for years and has routinely excoriated their leadership. Pyongyang responded once by calling Bolton “human scum.”

Fears abound in Washington that Trump is filling his Cabinet with like-minded people who will echo the President’s most pessimistic views back to him. Bolton is an unabashed hawk likely to embrace the president’s “America First” agenda that has at times undercut many of country’s longstanding global alliances. His views align with like newly nominated Secretary of State Mike Pompeo, who still is awaiting Congressional confirmation after last week’s dismissal of Rex Tillerson.

“It’s hard to escape the disquieting conclusion that the mass exodus of the ‘adults’ from this Administration is putting our nation’s security at risk,” Adam Schiff of California, the top Democrat on the House Intelligence Committee, said in a tweet. “Ambassador Bolton’s hawkish and conspiratorial thinking will only make matters dangerously worse.”

Bolton, a Yale-educated Baltimore native and former senior State Department official, spent more than two decades in and out of government, but rose to prominence as a lawyer representing President George W. Bush during the Florida recount in 2000. That sign of loyalty ultimately led to a nearly two-year stint U.S. ambassador to the United Nations.

But Bolton has never been one to quietly follow orders. In 1994, he declared that if the 39-floor U.N. headquarters in New York City “lost 10 stories, it wouldn’t make a bit of difference.”

Perhaps most famously, in 2003, Bolton delivered a speech denouncing then-North Korean leader Kim Jong Il as the “tyrannical dictator” of North Korea where “life is a hellish nightmare” just as the so-called six-party talks were about to begin to discuss dismantling Pyongyang’s nuclear-weapons program.

And so it is somewhat of a surprise in Washington and in foreign capitals that Trump named Bolton to such a prominent position in the Administration. The president is on track to meet current North Korean leader Kim Jong Un, Kim Jong Il’s son, to discuss the possible nuclear disarmament.

Bolton, meanwhile, has continued to reiterate his distaste for diplomacy with North Korea. In January, he said that talking with them was a “waste of time.” Most recently, he wrote an p-ed in the Wall Street Journal entitled “The Legal Case for Striking North Korea First.”

Bolton has also repeatedly questioned the multilateral deal signed during the Obama Administration under which Iran suspended its nuclear program. Trump promised to decertify it in May unless changes aren’t made.

“No fix will remedy the diplomatic Waterloo Mr. Obama negotiated,” Bolton wrote in the Wall Street Journal in January. “Mr. Trump correctly sees Mr. Obama’s deal as a massive strategic blunder, but his advisers have inexplicably persuaded him not to withdraw.”

If Trump undoes the nuclear deal with Iran, analysts fear that Tehran will sprint for a weapon. Its regional arch-rival Saudi Arabia would work to acquire its own nuclear weapon, setting off a 21st century arms race in a dangerous part of the globe.

“Taking hardline stances in op-ed pages is all good and well, but reality begins to set in once you’re briefed on military plans,” said Anthony Cordesman, a former intelligence official at the Pentagon now with the Center for Strategic and International Studies, a Washington think tank.

“The fact is that he is not alone in shaping these decisions,” he said. “There’s a new team coming into place and they will redefine each other’s views over time.”

Bolton replaces H.R. McMaster, an Army lieutenant general who plans to retire from the military. McMaster was a revered military officer, who enjoyed support from Tillerson and Defense Secretary James Mattis when Trump’s first national security adviser retired Army Lt. Gen. Michael Flynn was driven from his post due to the ongoing Russia scandal.

Trump and McMaster never had a close relationship and have been discussing McMaster’s departure for some time, said a White House official, who wasn’t authorized to speak publicly on the matter. Amid constant speculation, the timeline was expedited for his ouster. McMaster will stay on to ensure a transition for Bolton to take over by April 9.

In an interview told Fox News, Bolton said Thursday that he never has been shy about what his views are, but that’s behind him.

“Bolton is very hard line, but he is smart and thoughtful — not impulsive,” said Michael O’Hanlon, a military analyst at the nonpartisan Brookings Institution. “I am worried, but there is some hope.” 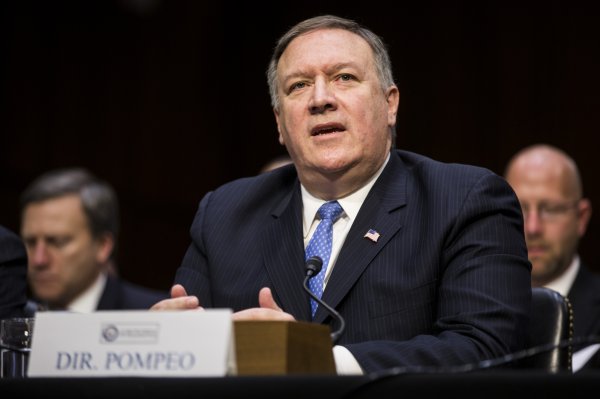 CIA Chief: Trump's Eyes Are 'Wide Open' on Talks With Kim
Next Up: Editor's Pick