A Patch of Plastic Garbage in the Pacific Ocean Amounts to Twice the Size of Texas, a New Study Says

Around 1.8 trillion bits of plastic waste have accumulated along a single stretch of the Pacific Ocean between Hawaii and California, an exponential increase since the 1970s, a new study shows.

Plastic debris typically collects in one of five “patches” around the world. The largest such repository, known as the Great Pacific Garbage Patch, has amassed so much plastic pollution that if it was heaped together it would amount to twice the size of Texas, according to research by Ocean Cleanup, a Dutch nonprofit.

After a three-year study, Ocean Cleanup found the amount of plastic amassing in the Pacific could be as much as 16 times higher than previously reported. Trawling the seas for floating plastic waste, the research team retrieved bottle caps, discarded fishing nets, toys and degrading containers. The 80,000 tons of litter estimated to have gathered in the patch translates to 250 discarded pieces per person around the world.

“Plastic concentration is increasing — I think the situation is getting worse,” Laurent Lebreton, an oceanographer at Ocean Cleanup, told the BBC.

Since plastic degrades into smaller and smaller pieces, the waste afloat in the Pacific may end up breaking down into many more bits of potentially harmful microplastics. These tiny particles of plastic smaller than the width of a human hair already account for 8% of the total debris, and could increase to 50 trillion particles, the study says. High levels of microplastics have already been found in the stomachs of fish for sale at supermarkets. It’s unclear what affect ingesting microplastics may have on humans.

Ocean Cleanup called for urgently stopping the new inflow of plastic waste, and removing “the existing mess accumulating in the environment.” The organization estimates it could reduce the Great Pacific Garbage Patch by 50% in just 5 years. 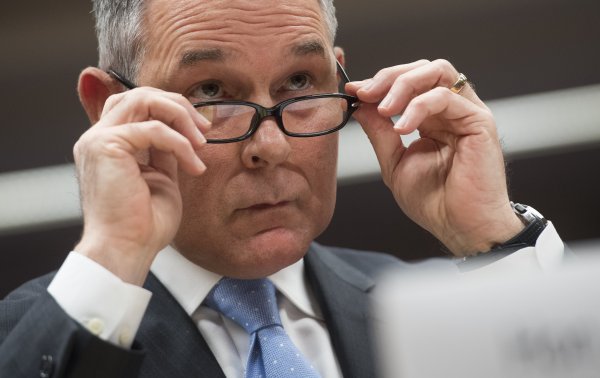 Report: Scott Pruitt Spent $68,000 on Seven Months of Travel
Next Up: Editor's Pick