McMaster, who was brought in last year to help stabilize the Trump administration in the wake of Michael Flynn’s firing, will be replaced by John Bolton. McMaster will stay on until April 9 to help with the transition, at which point Bolton will officially take office.

Here’s what you need to know about Bolton as he prepares to advise the President.

Known as a hardline interventionist, Bolton served as ambassador to the United Nations under President George W. Bush. He was floated for a number of foreign policy jobs before Trump took office, including the position of Secretary of State, but ultimately stayed an unofficial Trump fan until now.

Bolton has long been a presence on Fox News, and in recent months, has been widely rumored as the frontrunner for the National Security Advisor position. He has also been meeting regularly with Trump to discuss foreign policy, according to the New York Times.

While this switch is just the latest in a recent series of firings and resignations at the White House, the Times reports that McMaster’s departure was amicable. Trump’s goal, according to the paper, was to put in place a new national security team before he meets with North Korea’s Kim Jong-un this spring.

Why is Bolton controversial?

The choice of Bolton as National Security Advisor had many observers worried on Thursday, as he has been known for his blunt, and often extreme, comments. He has recently suggested the U.S. attack both Iran and North Korea, for example, and in the past has made comments such as saying “there is no United Nations” during a 1994 speech.

When he worked in the Bush administration as undersecretary of state for arms control and international security, Bolton pushed for the Iraq war and said he was “confident” that Saddam Hussein had “hidden weapons of mass destruction,” according to the BBC. Senators from both parties objected to Bolton’s appointment as U.N. ambassador in 2005, according to the New York Times, and Bush had to go around them to install him in the position.

Bolton has also been linked to anti-Islam organizations and has pushed an anti-Muslim conspiracy theory, according to BuzzFeed News.

In 2016, Bolton spoke at the conference of the American Freedom Alliance, which says it “promotes, defends and upholds Western values and ideals” and has been labeled a “hate group” by the Southern Poverty Law Center. There, he joked that President Obama was a Muslim. During his speech while talking about Muslim countries, Bolton said: “King Abdullah of Jordan, who is not simply a Muslim king of a Muslim country, unlike our president,” which got him a boisterous round of laughter from the audience.

Still, Bolton has been around the Trump administration for months. In December, Press Secretary Sarah Hauckabee Sanders said Bolton was a “friend of the President” and that his presence at the White House was “nothing more than a check in and a friendly visit.”

What about his mustache?

Twitter users have long had fun at the expense of Bolton’s distinctive bushy mustache — but not Trump. And with the hiring of Bolton, one of the biggest questions the Internet had was whether Bolton’s facial hair would also work in the West Wing.

The absurd interest in Bolton’s personal style stems from a late 2016 Washington Post report that aides said Trump wanted Bolton to join the administration after he was elected, but the President could not deal with Bolton’s mustache.

Given Bolton’s hardline stance on foreign policy and the unique look he has cultivated, it seemed unlikely on Thursday that he would be shaving simply to take a position in the White House. Still, some Twitter users had fun speculating about the outcome of the ‘stache. 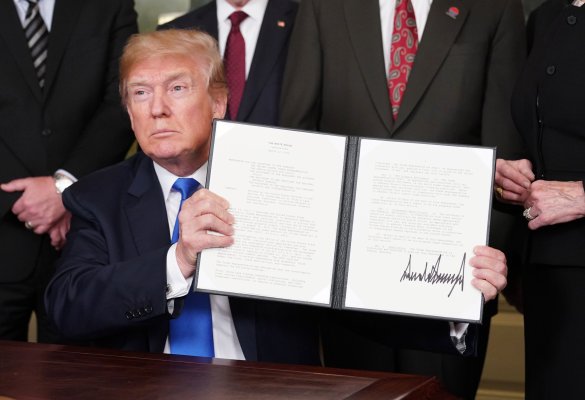