Edward Murrow as the host of 'See It Now' in the 1950s.
John Springer Collection/Corbis/Getty Images
By David Kaiser

When new technology or new economic innovations first emerge, smart people often sense where they might lead—even though their most profound consequences might be decades away. Karl Marx wrote large volumes about the consequences of capitalism—volumes that in many ways are still being vindicated—when capitalism and industrialization were only just getting off the ground. Tocqueville did something similar in the 1830s about democracy, which at that time only really existed in the United States.

In the same way, the advent of television, in the 1950s and 1960s troubled a great many people who thought it would tend to debase public life. In 1958, Edward R. Murrow, the great newsman, warned that television threatened the nation’s survival because it was using its power to distract the citizenry from painful realities. And more than 40 years ago my father, a civil servant and diplomat, who was then about 60, made a related remark. “One of the things we feared about television,” he said, “was that it would produce a great demagogue. But apparently, such men lose their appeal when you see them up close.”

Both of those fears seemed to be exaggerated at the time, because the customs and restraints that kept civilization and the American political system in place were still effective. Now however, decades later, the early warnings about the medium seem to be bearing fruit. The world of television has indeed taken over American political life, increasingly replacing political parties and local politics as the road to political power.

During its first two dominant decades in American life, the 1950s and 1960s, television functioned within the consensus culture that had grown out of the era of the Second World War. Its situation comedies gave us typical families with which to identify, the laugh tracks taught us what was funny, and its news organizations gave us the facts in calm, stentorian tones, rarely questioning what the nation’s political leadership was telling the people. No demagogue could use raw emotion to win the support of a whole major political party in those days because the people trusted the government.

Fissures caused by the civil rights movement and the Vietnam War, sadly, broke up that postwar consensus, and in the presidential election of 1968 a regionally based demagogue, George Wallace, managed to carry five states and 13.5% of the popular vote. The major parties managed to re-absorb his votes during the next three elections, but meanwhile, television was demonstrating an ability to elevate its own stars above any political figures. Walter Cronkite reigned for many years as the most trusted man in America, while numerous sitcom stars occupied a far larger place in the American imagination than any U.S. governor or Senator.

By the 2000s, changes in television, including the end of the Fairness Doctrine that required equal time for different views, had opened up a new route to fame, power and influence. People like Rush Limbaugh, Bill O’Reilly and Sean Hannity became national figures and, eventually, powers within the Republican Party. Reality television opened the door for Americans who were neither newsmen nor actors, and Donald Trump took spectacular advantage of the medium to turn himself into a national hero on The Apprentice.

Meanwhile, America’s old political system was suffering from hardening of the arteries. Two major paths to the White House emerged in recent decades. One was to become Vice President, the way followed, with more or less success, by men ranging from Richard Nixon to Al Gore. The second was to be closely related to a former President, as was the case for George W. Bush or Hillary Rodham Clinton. Both these routes gave candidates connections to the party’s leading donors and national name recognition. The older method of becoming a national candidate through a distinguished record of public service was falling rapidly out of fashion.

Donald Trump followed a new, third path. His nomination and election in 2016 confirmed the early predictions about television’s power. Trump had connected with tens of millions of his fellow citizens on The Apprentice, while both of the favored candidates of the two major parties—Jeb Bush and Hillary Clinton—had built political careers and reached the threshold of the White House thanks in large part to their family connections. Although the general election was quite close, neither party’s traditional procedures produced a candidate who could defeat Trump. The least experienced candidate in American history was elected President in November 2016. No matter what one thinks of the President, it’s hard to argue with the idea that he fulfilled the early predictions that television would help those who might qualify as demagogues, people who use popular prejudices to gain power.

The impact of the cable-TV-dominated culture, moreover, has continued to grow during Trump’s presidency. The President’s tweeted insults of not only of his opponents but also his own subordinates has been widely compared to reality television, and the news focuses on the revolving door for White House operatives and leaked predictions of one another’s departure. And, even among those who don’t admire Trump, the idea of non-political celebrity candidates has gotten more, not less, popular in his wake, as illustrated by the Oprah presidential boomlet, Cynthia Nixon’s candidacy for governor of New York, and talk of Tom Hanks as a possible candidate. Last but not least, the world of cable television is making new inroads into Trump’s government. Now that Goldman Sachs executive Gary Cohn has left the Administration over the decision to impose tariffs, his place as Chief Economic Adviser will be taken by Larry Kudlow, long a fixture at CNBC. In the same week, Heather Nauert of Fox and Friends, one of the President’s favorite shows, was named Undersecretary of State for Public Affairs.

The United States began as an attempt to create a new political reality based on certain ideals. It renewed itself in the service of different ideas during the Civil War era and again in the era of the Depression and the New Deal. Now, once again, the old order has atrophied. Television did not cause the breakup of the old political system, but it stepped into the void. It is hard to see how any of today’s new media will help restore a new national consensus. 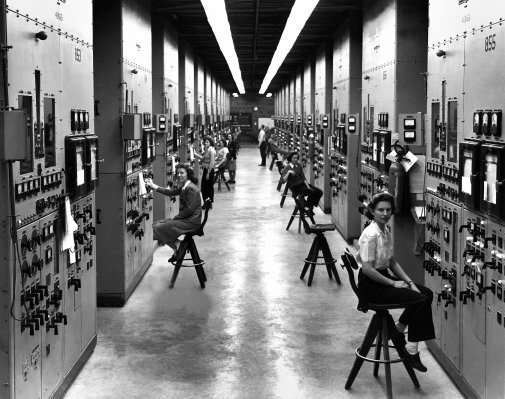 The Women's History Hidden in America's Nuclear Past
Next Up: Editor's Pick