President Trump Wanted $25 Billion for a Border Wall. Congress Gave Him a Fence Instead

President Donald Trump publicly griped over a congressional spending package that includes just a fraction of the money he wanted for border security, arguing that “the rest will be forthcoming.”

As part of a massive omnibus spending package on track to be approved, Congress is expected to approve just shy of $1.6 billion for border security, of which only $38 million can be spent on “border barrier planning and design.”

Trump had called for $25 billion to build a wall on the border of Mexico, but the bill allocates funds primarily for “pedestrian fencing,” leading Trump to tweet angrily that he had to “waste money” on Democratic “giveaways” to get the bill passed. (The package includes $591 billion in non-defense spending on such things as childcare development and efforts to combat the opioid crisis.)

As of Thursday morning, Congress has just more than 36 hours to pass the $1.3 trillion spending package — a massive, 2,232-page document that lawmakers only first saw on Wednesday night. Though the White House has said publicly that the president supports the package following meetings with Republican leadership on Wednesday, senior aides told The Atlantic that he was irate.

He is not alone, either. Conservative members of his own party, particularly in the House of Representatives, were quick to lash out against the bill, bemoaning the magnitude of the package and the haste with which they were expected to pass it.

Democratic leaders praised the bill, however.

“Every bill takes compromise, and there was plenty here, but at the end of the day we Democrats feel very good because so many of our priorities for the middle class were included,” Senate Minority Leader Chuck Schumer said in a statement. “From opioid funding to rural broadband, and from student loans to child care, this bill puts workers and families first.”

The bill also includes a provision endorsed by Senate Majority Whip John Cornyn, a Texas Republican, that will fortify the background check system used in firearms purchases and prompt states to report information from this system to the federal database.

The House is expected to vote on the bill on Thursday afternoon, before leaving town for the two-week Easter recess. From there, the Senate has until midnight on Friday to pass the bill before the government runs out of funding. 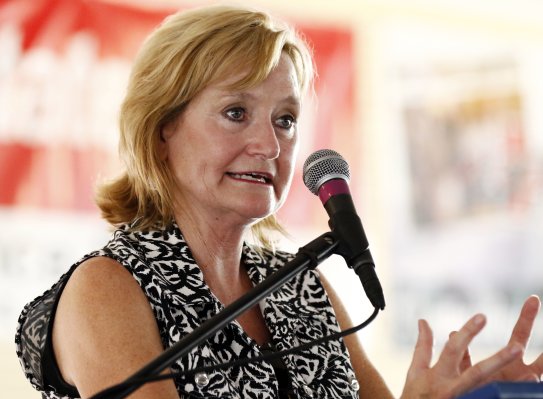 This Is the Last State to Not Send a Woman to Congress
Next Up: Editor's Pick