The Real Reason Why Mary Magdalene Is Such a Controversial Figure

Sex worker, saint, sinner, witness, wife. In the 2,000 years since Mary Magdalene is said to have watched Jesus Christ die on the cross, she’s been labeled many things.

The label “prostitute” has stuck fast for centuries, ever since Pope Gregory I first pronounced her a “sinful woman” in the year 591, defying evidence to the contrary in the canonical Gospels. On the other hand, Dan Brown’s novel The Da Vinci Code resurrected an old and popular theory that Mary Magdalene was in fact Jesus’ wife. Myths surround the figure of Mary Magdalene to this day.

But neither theory — penitent prostitute or devoted spouse — actually matches what can be said about Mary Magdalene from what’s written in the Bible: She was a woman from Magdala, a small Galilean town known for its fishing, who became a female disciple and was first witness to Jesus’ resurrection, the cornerstone of Christianity.

But the team behind the new film Mary Magdalene, directed by Garth Davis, is hoping to get back to basics. The movie, which came out in the U.K. on March 16, tells the story of Mary Magdalene (Rooney Mara), detailing her fraught existence in Magdala as a single woman determined not to marry, before she meets Jesus (Joaquin Phoenix) and follows him to Galilee and then Jerusalem, where he’s crucified. Yet, in stripping away the myths, this film portrayal of Mary Magdalene underlines what some scholars see as the real — and unexpected — reason why she’s so controversial.

At the heart of the controversy is the idea that Mary Magdalene’s connection to Jesus was spiritual rather than romantic. For example, in the film’s version of the Last Supper, Mary Magdalene is seated on Jesus’ right-hand side. Though the tableau echoes a key scene in the 2006 film version of The Da Vinci Code, in which the characters examine Leonardo Da Vinci’s mural The Last Supper and debate whether the effeminate figure to Jesus’ right was in fact Mary Magdalene, the new movie doesn’t place her there as his wife. The significance of her seat lies instead in Mary Magdalene taking the prized position above any of the twelve male apostles, as Peter (Chiwetel Ejiofor) looks on in jealousy.

This version of the story is the real reason why Mary Magdalene is dangerous to the Church, according to Professor Joan Taylor of King’s College, London, who worked as historical advisor for Mary Magdalene.

Mary’s central role in the Gospels has historically been used by some as evidence that the Church should introduce female priests — and since 1969, when the Catholic Church admitted that it had mistakenly identified Mary Magdalene as a sex worker, the calls for women in church leadership positions have only grown louder.

“Within the Church she does have tremendous power, and there are lots of women who look… to Mary Magdalene as a foundation for women’s leadership within the Church,” says Taylor.

The film draws partially from the Gospel of Mary, a “very mysterious document” discovered in the 19th century, Taylor says. It has no known author, and although it’s popularly known as a “gospel,” it’s not technically classed as one, as gospels generally recount the events during Jesus’ life, rather than beginning after his death. It’s thought the text was written some time in the 2nd century, but some scholars claim it overlaps Jesus’ lifetime.

In the Gospel of Mary, which isn’t officially recognized by the Church, Mary Magdalene is framed as the only disciple who truly understands Jesus’ spiritual message, which puts her in direct conflict with the apostle Peter. Mary describes to the other apostles a vision she has had of Jesus following his death. Peter grows hostile, asking why Jesus would especially grant Mary — a woman — a vision.

Mary Magdalene’s special understanding of Jesus’ message, and Peter’s hostility towards her, as portrayed in Mary Magdalene, will likely split opinion, according to Taylor and her colleague, Professor Helen Bond of The University of Edinburgh, Scotland, with whom Taylor is presenting a U.K. television series on women disciples this Easter, titled Jesus’ Female Disciples: the New Evidence.

“[In the film] she’s really close to Jesus, not because of some kind of love affair, but just because she…gets Jesus in a way that the other disciples don’t,” Bond says.

The idea that the twelve disciples didn’t quite “get” Jesus in the same way Mary Magdalene did is addressed throughout Davis’ film. The disciples are waiting for Jesus to overthrow the Romans and create a new kingdom, one without death or suffering. But by the end of the film, following Jesus’ death, Mary Magdalene has come to the conclusion that “the kingdom is here and now.”

Mary Magdalene’s release date in the U.S. has been pushed back; its initial distributor had been the Weinstein Company, which recently filed for bankruptcy after its co-founder Harvey Weinstein was accused of sexual assault. However, members of the Christian community have already expressed doubts about the film.

Taylor Berglund, an editor for Charisma Media, a Florida-based magazine aimed at charismatic and Pentecostal Christians, believes that there’s potential for Christian audiences to boycott the film, as they did for Noah, starring Russell Crowe, in 2014. “To say only Mary Magdalene understood Jesus Christ and everyone since has been mistaken would be heresy,” Berglund says.

The fact that Mary Magdalene draws from a “gospel” that isn’t officially recognized by the Church may also provoke criticism. Jerry A. Johnson, the president and CEO of National Religious Broadcasters (NRB), says that films that “rely upon extra-biblical accounts” can’t be “accurate.”

“Evangelical audiences do not look kindly on efforts to twist the story of Jesus to fit a political narrative in service of today’s agenda of feminism,” Johnson says.

But both Bond and Taylor point to the Bible itself for further evidence of Mary Magdalene’s intimate understanding of Jesus. She remains at the cross during the crucifixion while the other disciples hide, and she’s the first to see Jesus following the Resurrection. “[There’s] the very strong implication that Christianity is derived from her testimony and her witness,” Bond says.

Strip away the labels of “prostitute” or “wife,” and Mary Magdalene still remains a controversial figure. Her story challenges ideas about spirituality, and the role of women in religion. 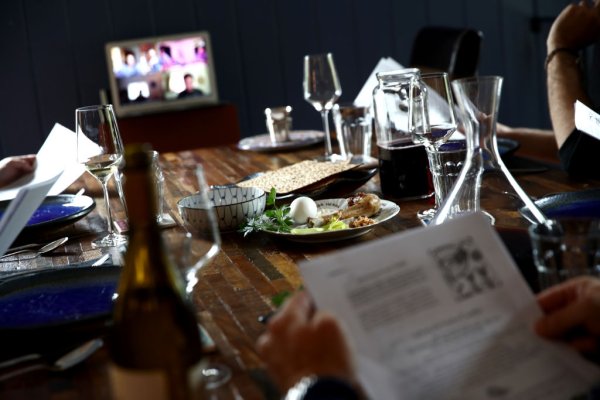 How to Wish Someone a 'Happy Passover'
Next Up: Editor's Pick