Putin Won. But Russia Is Losing

Vladimir Putin may have been re-elected president of Russia on March 18, but he’s far from the grand master of geopolitical chess portrayed in the Western media. Whether bragging about Russia’s “invincible” new missile, playing coy over accusations that his hackers play games with foreign elections or that his spies murder opponents in faraway places, the Russian President seems intent on restaging the Cold War–but without the military reach or global ideological appeal that made the Soviet Union a formidable foe.

What has Putin really won? Today’s Russia has an economy smaller than that of Canada. Its entire military budget is less than the extra money President Donald Trump wants Congress to spend on U.S. defense. It has no NATO allies, and it counts countries like Venezuela, Cuba, Sudan, North Korea, Syria and Serbia among its few reliable friends. China makes occasional deals with Russia but only at a Chinese price.

While Putin wants the world to see him as a strong, decisive leader, he often fails to understand the full impact of his actions. Looking at the foreign policy fights he has picked, it’s clear that he is a shrewd short-term tactician and a lousy long-term strategist.

Let’s begin with Ukraine. In response to the public protests in 2014 that ousted President Viktor Yanukovych–Russia’s man in Kiev–Putin ordered Russian troops into action. Seizing Crimea gave Putin a trophy at the West’s expense and boosted his tough-guy reputation. But freeing Ukraine of its most pro-Moscow region eased the way for Ukrainian nationalists to win the country’s elections and left Russia responsible for paying pensions in a place full of pensioners. Meanwhile, the Russian navy gained nothing of strategic value in Crimea; it already had a base on that peninsula. For all this, Putin invited sanctions from the U.S. and Europe–which contributed to a drop in Russia’s GDP from 2014 to 2015 that the World Bank put at 35%.

Nor did Putin win the hearts and minds of the people he tried to subdue. His move to destabilize Ukraine’s eastern regions led an entire generation of Ukrainians–too young to remember life in an empire governed by Moscow–to believe that Russia was their country’s bitter enemy. Ukraine may not move quickly toward the E.U. or NATO, but there is now a deep determination among many Ukrainians to never again serve as Russia’s junior partner. Putin may well be remembered as the Russian who lost Ukraine.

What about other former Soviet republics? The Baltic states–Lithuania, Latvia and Estonia–have long since turned to the West; NATO troops are even stationed there now, a direct result of Russia’s continued antagonism. Azerbaijan and the Central Asian states are more interested in long-term ties with rising China than with rusting Russia. If there is a dominant power in central Asia today, it’s strategic and hungry Beijing–to Moscow’s increasing chagrin.

In his quest for influence, Putin can look to Syrian President Bashar Assad, Russia’s only reliable Middle East partner, to claim victory over former U.S. President Barack Obama. Russia will now get to keep its one Mediterranean naval base. But to what end? Deeper involvement in the Middle East is not a good thing for a country with a stagnant economy that already spends too much on its military.

Putin’s worst decision was the green light he gave his intelligence services to play with the 2016 U.S. presidential election. It wasn’t a surprising move; manipulation and sabotage are art forms in which any former KGB lieutenant colonel will take pride. Putin wanted to bring the U.S. down a peg, and he hated Hillary Clinton. No evidence has yet emerged that Putin made Trump President, but the U.S. intelligence community and lawmakers of both parties are now focused on threats posed by Russia. Yet in spite of Trump’s fascinating refusal to criticize Putin, Russia’s President has gained nothing of value from the U.S. President. Only Putin’s failure to understand the checks and balances at the heart of the U.S. political system explains his apparent belief that Trump could override all objections to his would-be Russia reset. Sanctions aren’t going away. Now that Russia’s secret services stand accused of brazenly poisoning Sergei Skripal, a former double agent exiled in the U.K., more may be coming.

Putin’s adventurism has so far helped divert the attention of the Russian public away from endemic corruption and economic stagnation at home. There, his one lasting achievement is ensuring the independence of the country’s central bank and stashing away money in reserve funds during good times for use in bad times.

Russia is slowly emerging from two years of recession, mainly because oil prices have enjoyed a modest recovery. But as Putin begins his fourth term as President, he’ll face a stark reality: Russia remains as deeply dependent on oil prices as when he took office a generation ago. Ten years ago, the oil price climbed to $147 per barrel, and Russian living standards and self-confidence rose with it. Since then, the price has fallen to less than half that amount and looks set to remain there for the foreseeable future. And the U.S. is at the heart of a revolutionary shift in energy markets: technological innovation in crude oil and natural gas production has helped the U.S. rival Russia and keep prices much lower than during the commodity boom of the past decade.

There’s no evidence that Russia will adjust to this new reality by finally diversifying its economy. Even today, about 80% of Russia’s exports are directly related to oil and gas, according to the Carnegie Center in Moscow. It will slowly become harder for Russians to maintain their standard of living, and the state will have less money to spend on both guns and butter. Recent efforts to create a Russian version of Silicon Valley have produced little. That’s in part because Russia’s smartest and most talented minds have every reason to leave the country in search of better opportunities.

Putin should enjoy his victory celebration while it lasts. He and his country don’t have much else on the horizon. 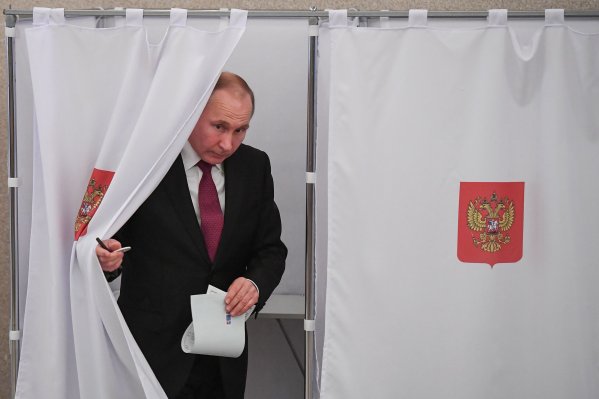