How Deloitte CEO Cathy Engelbert Rose to the Top

Growing up as one of eight siblings in the southern part of New Jersey, or South Jersey as it’s known to all who live there, has its disadvantages. Cathy Engelbert had to share a room with her messier younger sister Peggy. There were occasional fistfights, which Cathy usually lost. Both her parents had jobs outside the home, and sometimes her dad took extra work on weekends and evenings, either for more cash or for less chaos. But in elementary school, when Engelbert ran for class president, one advantage of having a big clan became apparent.

“She wanted to win so bad, and she was going up against the most popular boy in the class, so she came up with this campaign slogan, ‘Have a taffy, vote for Cathy,'” recalls Peggy, a nurse. “We run to the store and buy bags of Charms Pops and Tootsie Pops, and we tape the slogan to all of them.” Then four of her five brothers–Kurt, Kenny, Kevin and Keith (Kyle came later)–Peggy and oldest sister Beth gave out the candy around the school. Engelbert won in a landslide.

It’s interesting that the perpetrator of so flagrant a vote-buying scheme would be such a success in the audit business. The shyly confident, quietly competitive Engelbert, 53, is now CEO of Deloitte U.S. Like class presidents, Deloitte CEOs are elected, and like U.S. Presidents, they serve four years with the option of another four. Engelbert became the first female CEO of a Big Four financial-services firm in 2015 and will soon stand for her second term. If she wins, she will be the first two-term CEO since 1999.

At a time when fewer than one in 10 companies on the Fortune 500 has a female CEO, Engelbert exercises a particular brand of soft power, given that she runs the company that helps run 400 of those 500 businesses. (KPMG, another of the Big Four, also has a female CEO.) More than 60% of her employees are millennials, the majority of whom, having been trained by Deloitte, will leave to work elsewhere. She is responsible for forming tomorrow’s corporate leaders in an era when traditional models of political leadership are in flux–when, as she says, “we’re walking on business eggshells, because every morning you wake up and you kind of cringe when you go to look at your breaking news.”

Engelbert is also at the helm at a tricky time for financial-services firms. While they are known for audit and tax services, most of the growth in recent years has been in management consulting, the much sexier and more lucrative end of the business. (Deloitte advises Meredith Corporation, the owner of this magazine.) Instead of parachuting in to solve a particular problem, consultants now need to be able to effect a corporate metamorphosis for a whole new environment, one constantly being remade by digital technology. “Companies used to buy point solutions from us,” says Engelbert. “Now they want to buy end-to-end transformation.”

Deloitte hires 18,000 people in the U.S. every year. It has to predict who will be useful to businesses in the future. “Now 65% of IT spending is in the cloud,” says Engelbert by way of example. “That requires hiring different people than we hired before. We need more data scientists.”

But it’s not just expertise that she has to build; it’s culture. “Every day I wake up and say there are 88,000 people going out to clients today,” says Engelbert. “You have to build the right culture into them.” These issues are not Deloitte-specific. She believes the concepts of an employee and a workplace are changing rapidly. “Jobs are being disconnected from work,” she says. “Work has a whole new definition. There’s the gig economy, the open talent network. So how do you build culture when you can’t build it in your four walls?”

Engelbert has made a big bet on technology, forming partnerships with Amazon Web Services–to combine Deloitte’s business savvy with Amazon’s tech agility–among others and developing a cadre of Apple-specific advisers, experts in shifting businesses to mobile using the iOS platform. She has also doubled down on work-life balance, insisting, against the advice of her spreadsheet wielders, that all employees be offered 16 weeks of paid leave for any family emergency. “I’m not a big rattler, but I rattled some people,” she says. “I said we’re just going to do it.”

As far as work-life strategy goes, Engelbert has a black belt in scheduling. The day before our meeting, she was in Washington at a business roundtable. Two days before that, she was in Dallas. The previous week, Madrid and Singapore. Because she travels so much, she prioritizes family, including her two children, when she can. She coached her daughter’s middle-school lacrosse team. Even as CEO, she made it to most of her daughter’s high school games. She has promised her teenage son (her daughter’s now at college) that, after our conversation, a client lunch and several internal meetings, she will be home in northern New Jersey by 5 p.m. to watch an NCAA game with him. At about noon, her assistant gets antsy. Apparently I’m eating into Engelbert’s time for SMOR–“small moments of reflection,” the 10-minute microbreaks she schedules between one meeting and the next.

How did Engelbert win the approval, trust and votes of a business-minded group of individuals when so many other women struggle? In short, whether by nature or design, she does not appear threatening. Her conversational style is friendly and unpretentious. She makes no jokes. Like many CEOs, she’s a competent but unexciting public speaker: at a recent commencement at Duke, she gave advice that started with the letters D U K E, while at a Villanova talk her tips began with N O V A. Her office in Manhattan’s 30 Rockefeller Center, a mere 33 floors and 17 personality types away from the Saturday Night Live set, is decorated in soft hues. The imposing view of the Empire State Building is offset by many family photos.

Her only mild gesture of dominance is that despite being 5 ft. 10 in.–she was a walk-on basketball player at Lehigh University and captained a team that won the Eastern Conference title–she wears high heels, so she towers over most visitors.

Engelbert sources some of her success to two lucky breaks. The first was that as a young consultant, she was sent to find out about this new financial instrument, derivatives. Her early expertise catapulted her into a different league. “It gave me a platform to meet with treasurers and CFOs across America, and it was my first taste of leadership,” she says. It didn’t hurt that having grown up with five brothers, attended a mostly male college and married a former Army helicopter pilot–the kind of guy who drinks $100 wine out of a red Solo cup–she was not deterred by the behavior of the bros who worked in the capital-markets team.

The second grew out of what she calls “personal selfishness.” While pregnant, she was assigned to a client in St. Louis. She asked for a larger client, who happened to be located two miles from her home. Her bosses agreed but warned her that the proprietor was not a fan of female consultants. “He didn’t think I could do the job,” she says. “But I thought, I’m going to take this as a challenge and turn him. By the end of my five years there, he was like, ‘She’s the best partner I’ve ever worked with.'” This helped cement her reputation for being as good with clients as she was with numbers.

None of Engelbert’s success comes as a shock to her family, which has seen her fly in from Davos, give a speech for her mom’s retirement party and then get home in time for her son’s baseball tryout. “We always knew she was going places,” says Peggy. “Now whenever she achieves something, I just shrug and say, ‘Have a taffy, vote for Cathy.'” 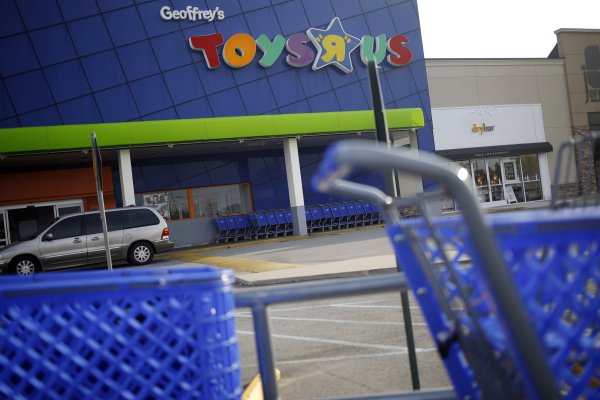 Amazon Might Take Advantage of Toys ‘R’ Us Store Closures
Next Up: Editor's Pick