Chinese space lab Tiangong-1 (or “heavenly palace”) is set to fall back to Earth some time at the end of March or beginning of April. The catch: It’s unclear where it will fall.

The 19,000-pound space lab — China’s precursor to a space station, according to NPR — was decommissioned and de-orbited in 2016, after being in use for nearly five years, Popular Mechanics reported. It has been replaced with Tiangong-2.

Tiangong-1’s fall to Earth is different from that of other space debris, which often have a controlled burn through the atmosphere and land in the ocean.

Initially, Tiangong-1 was expected to fall towards the end of 2017. As the lab has gotten lower, however, it has been easier to predict the “when”: “~30 March to ~6 April,” according to the European Space Agency. The agency notes that “This is highly variable.”

However, because the lab orbits the Earth “several” times per day, according to Popular Mechanics, the “where” is nearly impossible to predict. The organization Aerospace Corporation predicts that it will be somewhere between “north of 42.7° N latitude or south of 42.7° S latitude.”

According to Dr. William Ailor, an engineer at the Aerospace Corporation’s Center for Orbital and Reentry Debris Studies, there is little to worry about in terms of being hit by falling space debris.

Because most of our Earth is covered by the ocean, both Ailor and Popular Mechanics noted, what doesn’t burn up in the atmosphere is unlikely to strike a person. The likelihood is “one million times smaller than the odds of winning the Powerball jackpot,” according to Aerospace Corporation.

Space debris of this size falls to Earth multiple times a year.

“We had three objects reenter randomly in 2016 and four in 2017 the same size range. There were no reports of damage and in general no reports of these actually being seen,” Ailor told TIME, adding that it’s likely Tiangong-1 will come down over water.

“Of course, there is a chance it will come down over land, but we’ve never had a reported injury from space debris and only one person has been “touched”— Ms. Lottie Williams was brushed on the shoulder in 1997 and not injured,” he said.

If the space lab does fall in a populated area, it could be a spectacular sight for anyone looking at the sky, who could witness the fireball streaks of Tiangong-1 burning up. 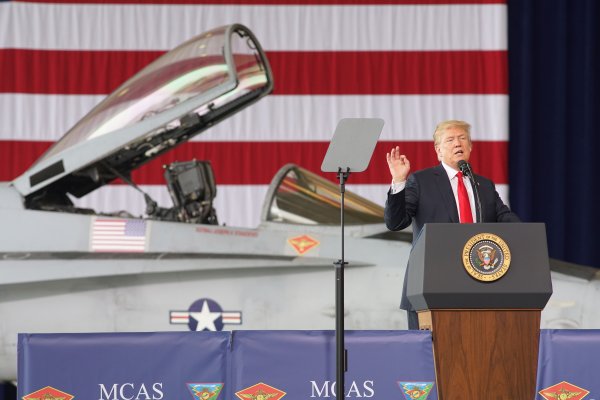 Trump Said America Is Going to Mars. Here’s Why That Won't Happen Any Time Soon
Next Up: Editor's Pick