How Bomb Investigators Piece Together the Clues After an Explosion

An intense manhunt for a serial bomber in Austin, Texas, ended in the early morning hours Wednesday when a 23-year-old suspect killed himself with an explosion inside his vehicle as a SWAT team closed in.

Authorities identified the man as Mark Anthony Conditt, a resident of a town located about 20 miles north of Austin, who went from “person of interest” to prime suspect mere hours before his death. There were deep fears that yet-to-be found unexploded bombs were still strewn around the city, but police assured the Austin community that the nightmare was over.

“I would classify this as a confession,” Manley told reporters, adding the suspect did not leave a motive or a specific reason why the suspect targeted the people who were killed or injured in the attacks.

Conditt discussed seven explosive devices in his recording. Authorities said all seven have been recovered.

The bombs exploded on front porches, near a city sidewalk, and inside FedEx facility. The blasts killed two people, injured four others, and terrorized a state capital known for its laid back atmosphere. For three weeks, Austin became a city on edge with each new blast, intensifying the pressure on law enforcement to identify a culprit.

But how do authorities find a faceless killer whose murder weapon bursts into a ball of fiery debris?

Hundreds of federal agents from the FBI and ATF descended on central Texas in hopes of turning up clues on one of the most baffling and audacious cases in recent memory. The agents, along with local police bomb units combed through each square-inch of the five blast areas looking for charred bomb fragments and scorched electronic bits to help determine how the bombs were constructed, what they were made from, and ultimately who built them.

“The ATF explosive experts working with the FBI bomb technicians have been able to reconstruct all these devices throughout this investigation, so that’s how we know what the components are,” ATF Special Agent in Charge Fred Milanowski told reporters. “I know to the public they may look all different, but when you look at the internal components they’re very similar to us, and from laboratory analysis we know the same person who manufactured them.”

Federal agents found homemade explosives and bomb components in one room of Conditt’s house, which were consistent with other evidence that authorities collected, he said.

The forensic work, which involved on-scene investigators and lab scientists from across the country, found the suspect’s bombs were all powered by “exotic” batteries made in Asia that had been ordered online, according to a NBC News report. Once investigators knew they were dealing with the same bomb maker, the report said, they began looking for mobile phones that repeatedly showed up in areas near the blasts.

The biggest break came after surveillance video at a FedEx store in south Austin captured a man believed to be Conditt — wearing gloves, a ball cap, and a long blonde wig — as he paid to mail two packages. One of those packages exploded at a FedEx facility, 60 miles south of Austin, while another intact package containing an explosive device was found at a FedEx facility near the Austin airport. The footage, though brief, gave fresh leads for investigators to follow.

The explosion turned out to be the fifth in the series of bombings. Three previous bombs were hidden in packages at the front door of homes. The fourth, injured two bicyclists, was triggered by a tripwire attached to a street sign.

A detailed examination of each of the scenes helped provided the earliest clues that launched a sweeping manhunt for the identity of the bomber or bombers.

“If a device explodes, the general belief among the public is that it’s all gone, but there’s quite a bit of physical evidence that remains at the scene,” said Adam Hall, a forensic explosives expert who previously worked in the Massachusetts State Police crime laboratory.

The type of explosive used may also glean telltale clues for investigators to piece together the device. They swab victims’ clothing and surroundings for post-blast residue. They use a handheld chemical detection device, called an ion mobility spectrometer, to “sniff” the air for material. Some explosives contain taggants, uniquely encoded chemical markers, which identify where they came from.

It’s like putting a puzzle together, Hall said, even if you can’t find all the pieces.

“Time is of the essence,” he said. “You have an individual or individuals who are creating these devices, causing public harm and panic, and killing people. “

Collecting the smallest splinter can be crucial, he said. Traces of DNA or fingerprints may be present that analysts can attempt to match to a suspect. Also, if part of the device’s wiring, timer, or circuit board is recovered, for instance, it could help narrow the search on where the components were manufactured or purchased.

Investigators in the 1988 bombing of a Pan Am jumbo jet over Lockerbie, Scotland that killed all 243 passengers and 16 crew, were able to track a fragment of the device’s circuit board — the size of a thumb nail — to its manufacturer, then onto those responsible: two Libyan nationals.

“Lots of material survives from the bombing — metal parts, tape, plastic — to link the bombings,” said Jimmie Oxley, the co-director of the University of Rhode Island’s Center of Excellence in Explosives, Detection, Mitigation, and Response. “They will look for matches.”

The ATF’s National Response Team works with state and local investigators to gather evidence, reconstruct the scene, identify the origin of the blast and determine the cause on the nation’s highest profile bombings. The team is composed of veteran special agents, forensic chemists, explosives enforcement officers, and trained canines.

With even the scantest amount of evidence, investigators try to reassemble the bomb. Once they do, the materials can be cross-referenced with the FBI’s Terrorist Explosive Device Analytical Center in Quantico, Virginia. The immense facility, known as the “bomb library of America,” was established in 2003 and serves as a database and repository for improvised explosive devices collected from around the globe.

The wars Iraq and Afghanistan have generated a wealth of knowledge in the U.S. government about tactics, techniques, and procedures used in crafting explosive devices, said Mark Sanders, a retired Navy commander who worked in Explosive Ordnance Disposal. No matter how much care a bomber takes into making a device, he or she will reveal something.

“There’s a lot to look for,” he said. “Whether it’s a latent fingerprint or DNA or tool marking or type of explosive, you can’t hide it all.” 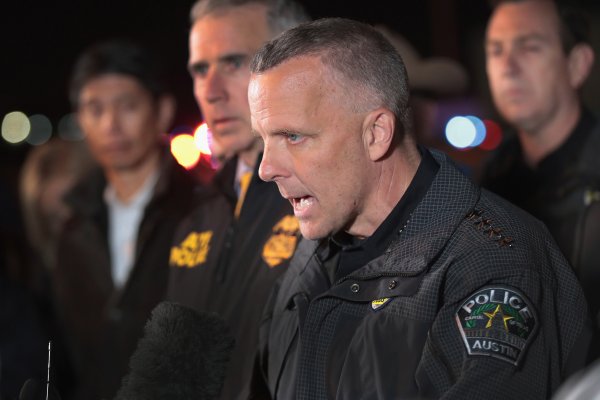 Austin Bombing Suspect Left Behind a Recorded 'Confession'
Next Up: Editor's Pick