'I Returned to Say Goodbye.' A Photographer Shares the Final Moments of the Last Male Northern White Rhino

The world has been captivated by the loss of a rhino named Sudan, who passed away at Ol Pejeta Conservancy in Kenya this week from age-related complications.

Elderly for his species, the 45-year-old Sudan lived a long and generally good life that would be almost unthinkable in the wild. His death was not unexpected, yet it has resonated around the world. As the planet’s last male northern white rhinoceros, Sudan found stardom as the so-called “last man standing.” Some affectionately called him “the most eligible bachelor in the world.”

I met Sudan nine years ago, after I heard about a plan to airlift four of the world’s last northern white rhinos from a zoo in the Czech Republic to Kenya. It sounded like a storyline for a Disney film of captive animals returning to the wild dusty plains. In reality, it was a desperate, last-ditch effort to save a species. At the time, there were only eight of these rhinos left, all living in captivity.

When I saw this gentle, hulking creature in the Czech snow, surrounded by smokestacks and humanity, it seemed so unfair. He looked ancient, part of a species that has lived on this planet for millions of years, yet could not survive mankind.

Sudan and three other rhinos left the Dvůr Králové Zoo on a cold night in December 2009. They were brought to move “free” on the Kenyan savannas at Ol Pejeta. The hope was to breed them. The air, water and food—not to mention room to roam—might stimulate them, experts thought. The offspring could then be used to repopulate Africa. Failing that, they would be cross-bred with southern white rhinos to preserve the genes.

I remember so clearly when Sudan first set foot on the African soil. The skies darkened and torrential rains came moments after we arrived. He put his head in the air to smell the rains and immediately rolled around on the ground. It was his first mud bath since he left the continent as a two-year-old, taken from Sudan, the country with which he shares his name. That Sudan was moved to the Dvůr Králové Zoo may have saved his life; the last known wild rhinos were poached on the border of the Democratic Republic of the Congo in 2004.

This week in Kenya, I returned to say goodbye. Moments before he died, Sudan was surrounded by love, together with the people who committed their lives to protecting him and giving him the good life he enjoyed. There were the directors and people from the Dvůr Králové Zoo, staffers and his six dedicated keepers from Ol Pejeta, who spent more time with him than their own children. Veterinarians and other people from Kenya Wildlife Services were present as well. Most of them had been crying for days. I gave Sudan one last scratch on his ear. He leaned his heavy head into mine and the skies opened up just as they had when he arrived here nine years ago. He perked his head up in the pouring rain. All was silent except for one go-away-bird.

Poaching is not slowing down. It’s entirely possible, even likely, that if the killing continues, these rhinos—along with elephants and a host of lesser known plains animals—will be functionally extinct in our lifetime.

The plight of wildlife and the conflict between poachers and increasingly militarized rangers has received much-needed attention. But very little has been said about the indigenous communities on the front lines of the poaching wars, and the incredible work being done to strengthen them. We often forget that the best protectors of these landscapes are the local communities. Their efforts are ultimately the best immunization against forces that threaten both their wildlife and way of life. My hope is that Sudan’s legacy serves as a catalyst to awaken humanity to this reality.

Sudan’s death could mean the extinction of his species, though scientists are considering other options involving two remaining females, including stem cell procedures and harvesting eggs. But if there is meaning in Sudan’s passing, it’s that all hope is not lost. This can be our wake-up call. In a world of more than 7 billion people, we must see ourselves as part of the landscape. Our fate is linked to the fate of animals.

Ami Vitale is a Nikon Ambassador, filmmaker and photographer for National Geographic. Her journey has taken her to nearly 100 countries working on stories about coexistence. You can follow her on Instagram @amivitale. 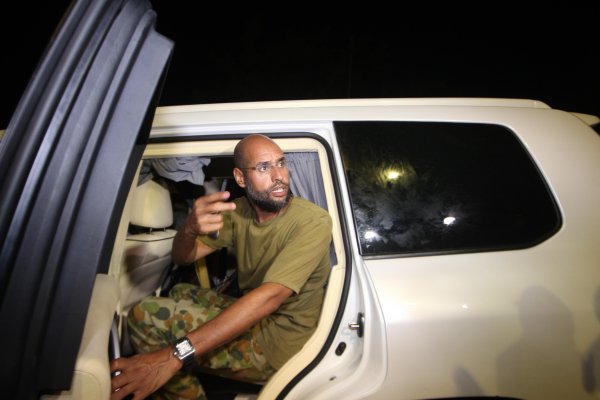 Did Libya's Dictator Bankroll Sarkozy? Gaddafi's Son Hinted at Dirt in 2011
Next Up: Editor's Pick