President Donald Trump is shaking up his legal team, again.

As negotiations continue with special counsel Robert Mueller on the investigation into Russian meddling in the 2016 election, the president has added a new lawyer and is considering making other changes.

The newest addition to the legal team has garnered attention for burnishing Trump on cable TV. Former federal prosecutor Joseph diGenova previously argued on Fox News that the Russia investigation was part of a “brazen plot” by FBI and Department of Justice staffers to frame Trump.

Trump’s legal team also reached out in recent days to noted D.C. powerhouse Ted Olson, solicitor general under President George W. Bush, but he declined within hours of the news becoming public. Trump is also reportedly in discussions with Emmett Flood, a veteran D.C. lawyer who worked with Bill Clinton during the impeachment.

The news contradicts Trump’s tweet on the subject earlier this month, in which he declared that he was not seeking to change his legal representation.

The Russia probe is not the only matter on which Trump is getting legal advice.

Former Playboy model Karen McDougal is also suing the parent company of the National Enquirer, whose chief executive is friendly with Trump, seeking to be released from a legal agreement that bars her from speaking about an alleged affair with the president as well. Trump’s lawyers are not involved in that case.

Here’s a look at the lawyers representing Trump in the various matters.

McGahn is the current White House counsel, the top lawyer tasked with advising the president on legal issues about policies and legislation. But McGahn has been at the center of controversies over Trump’s challenged travel ban, executive orders and the scandal surrounding former national security adviser Michael Flynn’s tenure in the White House, and Trump at one point handed off responsibility of Russia-related issues to his personal attorney. Before becoming White House counsel, McGahn was Trump’s lawyer on the campaign, and he previously served as a commissioner with the Federal Election Commission. McGahn reportedly threatened to quit when Trump asked him in 2017 to fire Mueller, and the president backed down.

A former federal prosecutor and a white-collar defense lawyer at the law firm Hogan Lovells in Washington, D.C., Cobb was at one point in charge of overseeing the legal strategy and media response to investigations into the Trump campaign’s alleged collusion with Russia. Trump has reportedly considered firing Cobb, who repeatedly said during 2017 that the Russia investigation would be finishing soon and encouraged the president to cooperate with Mueller. In September, Cobb was overheard by a reporter talking openly at a Washington restaurant about the investigation.

A noted white collar defense attorney in Washington, Dowd joined Trump’s legal team in June. He argued in December that a president cannot obstruct justice, a controversial legal theory that many experts disagree with. And in March, he told a reporter that he hopes Deputy Attorney General Rod Rosenstein will shut down the Russia investigation, a break from Cobb’s talk of cooperating with Mueller. The remark led to questions about whether the president’s legal strategy on the Russia investigation was moving to a more aggressive stance.

Cohen is a personal lawyer, spokesperson and close confidant of Trump’s. He’s been working for Trump for years, closely enough that he has hired his own lawyer to help him with the Russia probe. He’s known as a particularly aggressive advocate on Trump’s behalf, Trump’s “pit bull or consigliere,” as ABC puts it, for threatening legal action against critics, yelling at reporters and vigorously defending his boss on Twitter.

Sekulow is on Trump’s personal legal team advising him on Russia issues, and one of the lawyers who often appears in television hits. On Sunday on ABC, Sekulow said of Donald Trump Jr.’s Russian meeting, “Well, I wonder why the Secret Service, if this was nefarious, why the Secret Service allowed these people in.” The Secret Service responded and said it did not vet the meeting. Sekulow is Chief Counsel for the American Center for Law & Justice and hosts his own talk show, and before joining Trump’s team he had spent his legal career representing conservative groups.

Trump added Joseph diGenova, a Washington lawyer and former U.S. attorney, to his legal team in March. Two months earlier, diGenova had gone on Fox News and endorsed the conspiracy theory that the FBI and Justice Department framed Trump. “There was a brazen plot to illegally exonerate Hillary Clinton and, if she didn’t win the election, to then frame Donald Trump with a falsely created crime,” he said. “Make no mistake about it: A group of F.B.I. and D.O.J. people were trying to frame Donald Trump of a falsely created crime.” It also emerged that during the investigation of President Bill Clinton in 1997, diGenova published an op-ed in the Wall Street Journal arguing that sitting presidents can be indicted, a legal question that may take on new relevance under Mueller’s investigation.

Trump’s personal attorney, Kasowitz has represented Trump for years, including in divorces, bankruptcy cases and the sexual misconduct allegations that surfaced during the presidential campaign. He’s known for a fiery temper—in an email outburst published by ProPublica, Kasowitz told an unidentified person, “”F–k you… And you don’t know me, but I will know you. How dare you send me an email like that. I’m on you now. You are f–king with me now. Let’s see who you are. Watch your back b—h.” Kasowitz then reportedly left Trump’s legal team, but he has recently been working with Trump on the Zervos lawsuit. 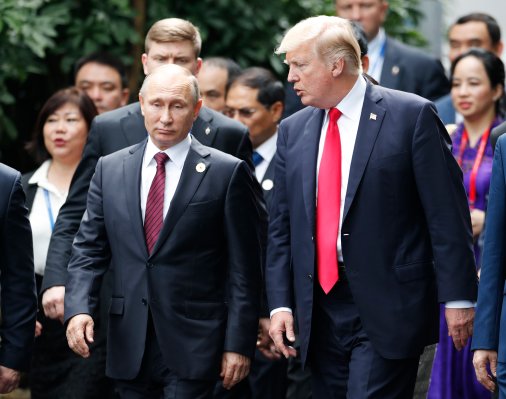 Trump Wants to Discuss Arms Race With Putin
Next Up: Editor's Pick