“Mr. Sarkozy cannot play with us forever,” Saif said, wagging his finger on camera during the long interview, which took place after midnight in the swank Rixos Hotel in Libya’s capital Tripoli. “He plays a very dirty game. And we can do the same thing with him,” he said. “He should be very careful.” (Watch from 4:45 in the clip above)

This week, the world came closer to understanding just what Saif might be referring to, as Sarkozy was taken into police custody for questioning over allegations that he received millions of euros in illegal campaign financing from the Gaddafi regime in 2007.

On Tuesday, Saif—who is planning a run for the presidency in Libya after his release from custody there last year—repeated his offer of evidence allegedly proving that Sarkozy, who was president from 2007 to 2012, was given illicit funds. But seven years ago in an interview with TIME, he had already hinted at the dirt Libyan officials had on the French president.

The atmosphere in Tripoli was electric at the time: Rebels were waging a fierce battle against Gaddafi’s 42-year rule, in the biggest war of the Arab Spring, and Gaddafi’s henchmen and government were holed up in the city, bracing for NATO-led bombing strikes that would soon doom them and Gaddafi’s so-called Green Revolution to extinction.

It was then that Saif al-Islam leveled his fury against Sarkozy, who—along with then-British Prime Minister David Cameron—had led the push for the West to bomb Gaddafi’s forces. When TIME asked Gaddafi’s son (and the heir apparent to his regime) what he could do to the French leader, he said, “We can reveal a lot of things. Secrets. He knows. He knows very well. So, the French should behave, or there is going to be a big fiasco in France,” he said.

Saif did not want to spell out the details—”enough of this,” he said, eager to return to describing how Gaddafi’s military would crush the rebels.

In any case, Saif didn’t need to drop hints. By the night he met TIME, aides to Gaddafi had been telling reporters for weeks that the Libyan leader had helped finance Sarkozy’s 2007 presidential campaign.

On Tuesday—exactly seven years after France’s first bombing strikes on Tripoli—Sarkozy was hauled into police custody and grilled for 14 hours at a judicial police station in Nanterre, west of Paris. If true, Sarkozy would have violated the country’s ban on any foreign donations to French elections. And depending on the amount, it would also break a law capping election spending for second-round candidates at €21.6 million (about $26.5 million) at the time. Sarkozy, 63, one of the country’s foremost right-wing politicians, has denied all the charges, calling them “grotesque” and “crude manipulation” by his political foes.

Although he was allowed to return home toward midnight, he was summoned back on Wednesday for more questioning. Under French law, police can question him for 48 hours in the presence of his lawyer. After that, Sarkozy will either be released or will have to return for further questioning—and could yet face an indictment. The government-owned Radio France International called that possibility “the biggest scandal in France since the end of World War II.”

The scandal has been brewing for years, though this is the first time Sarkozy has been questioned by police. France opened a judicial inquiry in 2013, after the French investigative website Mediapart published a document allegedly signed by Libya’s intelligence chief Abdullah Senussi showing that Gaddafi had agreed to fund Sarkozy to the tune of €50 million ($61 million). Sarkozy sued Mediapart for forgery over the document; according to Mediapart, he lost the case.

Left unclear is why Gaddafi might have sought to underwrite Sarkozy’s campaign. Saif offered one explanation in 2011 to Euronews, saying that it was in order for Sarkozy to help Libya, and since that did not happen, “the first thing we want this clown to do is to give the money back to the Libyan people. He was given assistance so that he could help them,” he said. “But he’s disappointed us: give us back our money.” Seven years on, with the allegations against Sarkozy heating up, the “fiasco” Saif warned of in his wartime interview with TIME does seem to be playing out. 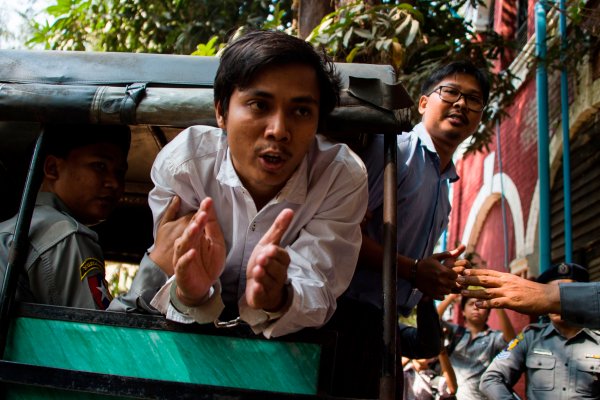 Two Reuters Reporters Have Spent 100 Days in Myanmar Jail
Next Up: Editor's Pick