Stormy Daniels Took a Lie Detector Test About Her Alleged Affair With Donald Trump. She Passed

Stormy Daniels passed a lie detector test that focused on her alleged sexual encounter with President Donald Trump in July 2006.

In a polygraph report obtained by CNN, Ron Slay, the polygraph examiner who administered the test to Daniels in May 2011, said she was “truthful about having unprotected vaginal intercourse with Donald Trump in July 2006.”

Daniels answered yes to all three questions. In the report, Slay said the last question pertaining to the president’s promise that Daniels would appear on The Apprenticewas “inconclusive.”

White House representatives did not immediately respond to PEOPLE’s request for comment.

He told CNN in a statement that he bought the video “to ensure that it would be maintained and kept safely during the litigation and not be altered or destroyed. We did so after learning that various parties, including mainstream media organization, were attempting to acquire the video and the file and either destroy it or use it for nefarious means.”

According to WSJ, Daniels took the polygraph test as part of an agreement to sell her story to Life & Style magazine. The publication said Daniels would have been paid $15,000 had the interview been published.

In a statement obtained by PEOPLE, Avenatti says, “There is no question Ms. Clifford is telling the truth. The American people will come to their own conclusion this Sunday after watching 60 Minutes.”

Daniels also took to social media Tuesday, addressing those who criticized her on Twitter.

To one commenter who said she should “just disappear,” Daniels replied: “Technically I didn’t sleep with the POTUS 12 years ago. There was no sleeping (hehe) and he was just a goofy reality TV star. But I digress…People DO care that he lied about it, had me bullied, broke laws to cover it up, etc. And PS…I am NOT going anywhere. xoxoxo”

Trump’s lawyer has threatened to sue Daniels for allegedly violating a nondisclosure agreement 20 times, according to The Washington Post.

Michael Cohen, Trump’s personal attorney, claimed he had the right to sue Daniels for $20 million in damages in court documents filed Friday, according to the newspaper.

WSJ reported that Cohen arranged a $130,000 payment to Daniels a month before the 2016 election so she would keep quiet about an alleged sexual encounter she had with Trump in July 2006 — less than four months after Trump’s wife, Melania, gave birth to their son, Barron, now 11.

Cohen and the White House have denied the allegation of an affair, with a Trump official telling the Wall Street Journal in January: “These are old, recycled reports, which were published and strongly denied prior to the election.”

Cohen initially denied paying Daniels, but later admitted to it calling it a “private transaction” and said it didn’t violate any campaign finance laws. A recent Wall Street Journal report said Cohen later complained to friends that he hadn’t been reimbursed for the payment.

Daniels is still fighting to tell her story. The New York Times reported this month that Daniels’ lawyer sent a letter to Cohen offering to return the $130,000 payment in exchange for dissolving a so-called “hush agreement.”

She is set to appear on 60 Minutes this Sunday with contributor Anderson Cooper. 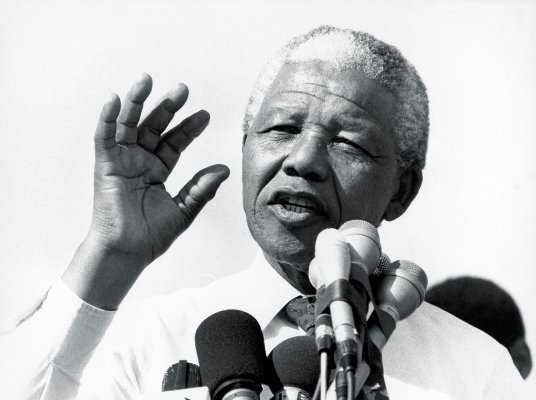 What Nelson Mandela Would Have Seen in President Trump
Next Up: Editor's Pick