The Boss: Melissa Chiu Is Dedicated to Bringing Diverse Artists to the Hirshhorn Museum

People often ask me how I became involved in contemporary art. Growing up in Australia, a country with great museums but limited historical collections, the choice seemed easy. Contemporary art was a field where you go to work with artists, and generate new ideas. I started as an independent curator working with museums and artist-run spaces, and later went on to work with a group of artists to found an entirely new space that we later transformed into a contemporary art center in Sydney. I look back on this period now as helping me to understand how art can impact issues around community and identity. As someone who has Australian and Chinese heritage, much of my focus was about connecting Australia to its large and diverse, and somewhat underrepresented, Asian-Australian community.

I’ve spent the past 17 years in the United States, first in New York and now as the director of the national museum of modern art, the Hirshhorn, which is a part of the Smithsonian in Washington, D.C. Over the past four years, my first priority has been to create topical and responsive programming through exhibitions, performances and talks. As a national museum, our focus on representation is a key issue. How do the artists we select to exhibit reflect the issues of our times? Do they reflect the diversity of our own local, national and international community and make significant connections with them? One of the first shows I organized at the Hirshhorn was by Iranian American Shirin Neshat, whose photos grapple with the dramatic changes she saw in her homeland. In the heart of Washington, at a time of heightened tensions between the two countries, we were able to show Iran through a personal, sometimes melancholic and sometimes political view, from the perspective of an Iranian artist in diaspora. Now more than ever, artists who break down barriers and help us see the world in a new way are key.

The art world is like many other areas right now, with a heightened awareness of identity and attention to questions of power: Who has been overlooked? Which voices have we not heard? One of the most important contributions museums can make today, and one of the goals I have for my own work, is to bring greater attention to the voices of artists who are not yet recognized for the groundbreaking work that they do. This often includes artists living outside the usual art centers of New York or Paris, or artists who have worked for decades without a major museum exhibition, but who have still managed to revolutionize our understanding of art.

As leaders, we can insist that their accomplishments are celebrated. When I joined the museum we had not made contemporary women artists a focus of our exhibitions, but since then, half of our single-artist shows have been of women, which is unprecedented for the museum. We just opened Brand New: Art and Commodity in the 1980s, which includes the work of dozens of women who pushed the boundaries of the art world in the ’80s but who were perhaps not as well-known at the time as their male counterparts.

Last year’s landmark Hirshhorn exhibition of Japanese artist Yayoi Kusama’s Infinity Mirror Rooms is a wonderful example of the power of this shift. I’ve known and admired Kusama for years, and she graciously worked with us to create the first-ever exhibition with six of her dazzling, immersive installations. It was our most popular show – ever – with lines around the block. After five decades of working in relative obscurity, Kusama’s exhibitions now average half a million visitors at each venue. At the age of 88, she’s a global art superstar.

As the national museum of modern art, we have the privilege to convene artists and the community around ideas that matter. Many of our visitors are encountering contemporary art for the first time. I hope they discover that the definition of what art can be is so much more broad and exciting than they might imagine. Artists have fascinating lives and histories, they use music videos and iPhones as tools just as much as paintbrushes; they grapple with what it means to be human today. My hope is that the Hirshhorn is not just a place to display the objects they make, it’s where we can come together to shape 21st century culture. 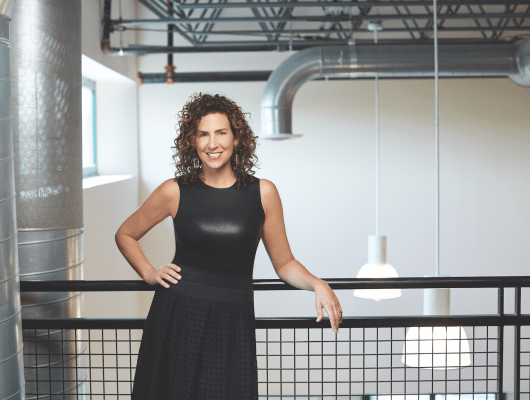 The Boss: How Kerry O'Brien Made Millions From Selling Seamless Underwear
Next Up: Editor's Pick