The Austin Serial Bombing Suspect Is Dead. Here's What to Know About Mark Anthony Conditt

The man who police believe was behind a series of package bombings in Austin, Texas, has died after detonating an explosive device inside his car, officials said Wednesday morning. The man has been identified as Mark Anthony Conditt, according to Austin Police.

“This is the culmination of three very long weeks for our community,” Austin Police Department Chief Brian Manley said during a press conference Wednesday, adding that there have been “far too many tragedies in the last few weeks.” Two people have died as a result of the attacks.

The news came a day after a fifth package bomb, believed to be linked to the investigation, exploded at a FedEx distribution center in Schertz just after midnight on Tuesday, leaving one employee with non-life-threatening injuries. An explosion at an Austin Goodwill store on Tuesday was originally thought to be connected as well, but turned out to be unrelated, according to authorities.

Police said Wednesday night that they found a 25-minute recording — which Manley described as a confession — on Conditt’s phone, in which he described the explosive devices and detailed how he made them.

Here’s what we know about the suspect so far.

Who was the Austin bombing suspect?

The suspected Austin bomber, a 23-year-old white male, has been identified as Mark Anthony Conditt, according to Austin Police. Law enforcement officials originally said the suspect was 24.

Police recently received information about the suspect, Manley said, after which he quickly moved from a person of interest to a suspect. Law enforcement officials tracked the vehicle the suspect was known to drive, and found him at a hotel in Round Rock, outside Austin.

FedEx said it provided authorities with “extensive evidence” captured by its security system, CNN reports. CBS Austin published images of an individual believed to be the suspect, possibly wearing a wig and gloves, inside a South Austin FedEx store.

What do we know about Mark Anthony Conditt?

Pflugerville Mayor Victor Gonzales told the Associated Press that the suspect lived in the Austin suburb, large portions of which were evacuated or shut down Wednesday as authorities continued their investigations.

In a statement to CNN on Wednesday afternoon, Conditt’s aunt said the family was devastated and shocked by his role in the bombings. “We are devastated and broken at the news that our family could be involved in such an awful way. We had no idea of the darkness that Mark must have been in,” the statement said. “Our family is a normal family in every way. We love, we pray, and we try to inspire and serve others. Right now our prayers are for those families that have lost loved ones, for those impacted in any way, and for the soul of our Mark. We are grieving and we are in shock. Please respect our privacy as we deal with this terrible, terrible knowledge and try to support each other through this time.”

Neighbor Jeff Reeb told AP he had lived next to Conditt’s parents for 17 years and watched their son grow up. He said Conditt “always seemed like he was smart” and “polite,” and that he frequently visited his parents at their home, a few miles from where Conditt lived with roommates in Pflugerville. Austin Police detained and questioned two of the suspect’s roommates on Wednesday, but their names have not been released since they are not under arrest, authorities said.

A Facebook post from Conditt’s mother, Danene Conditt, which was reviewed by TIME before being deleted Wednesday afternoon, said Conditt had finishing homeschooling in 2013, and was mulling over next steps, including a possible mission trip. Other photos posted by Conditt’s family members show him snowboarding and shooting a gun.

Conditt later attended Austin Community College (ACC) from 2010 to 2012 but did not graduate, an ACC spokesperson told AP. A government class blog kept by an ACC student named Mark Conditt in 2012 detailed anti-gay marriage, “free abortion” and sex offender registration stances, as well as an argument for the death penalty.

A Facebook for a person called Mark Conditt from Pflugerville was blank Wednesday morning. Shortly after the suspect was named publicly, the page was no longer public.

Is the Austin bomber dead?

Yes. Police believe the suspect built all the bombs that exploded in Austin. As police monitored the suspect’s vehicle early Wednesday at a hotel, it began to drive away, Manley said. Authorities pursued the vehicle, and it eventually ran into a ditch on the side of the road. As SWAT officers approached, a bomb went off inside the car, killing the suspect. One officer sustained minor injuries in the blast, Manley said.

Are there more suspects in the Austin bombings?

It’s “hard to say” whether the bombing suspect had help, according to Fred Milanowski, an agent with the U.S. Bureau of Alcohol, Tobacco, Firearms and Explosives, though Texas Gov. Greg Abbott said investigators believe the suspect acted alone.

Investigators said it does appear that the same person built all of the explosive devices in question.

U.S. Rep. Michael McCaul, a Republican congressman from Austin and chairman of the House Homeland Security Committee, told KXAN-TV that authorities believe Conditt purchased supplies for bombs at a local Home Depot store, AP reports. It’s not clear where the bombs were made, AP adds.

Manley also said there is some concern that other packages may have been left around Austin before the suspect died. “We don’t know where this suspect has spent his last 24 hours and therefore we still have to remain vigilant to ensure that no other packages have been left throughout the community,” Manley said.

What was the Austin bomber’s motive?

No motive has been identified at this point, Manley said. Some observers noted that the suspect’s alleged actions could be race-related, since the first package bombs killed two black men and injured a Hispanic woman, but Manley earlier told the Associated Press that police were not “making the connection to a hate crime,” after doing so at first.

The bomb that exploded from a suspected trip wire on Sunday night injured two white men.

How have officials responded?

Manley also tweeted his thanks to officers and federal partners on Wednesday. 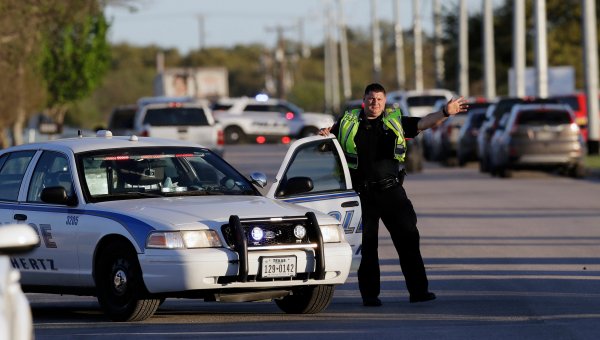 A Series of Bombings Leaves Austin on Edge
Next Up: Editor's Pick