Senate Majority Leader Mitch McConnell praised Special Counsel Robert Mueller and said he “should be allowed to finish his job,” breaking his three-day silence on President Donald Trump’s attacks on Mueller and his Russia investigation.

“I don’t think Bob Mueller is going anywhere,” McConnell said Tuesday at a news conference. “I have a lot of confidence in him.”

Republicans are privately alarmed that Trump may try to oust Mueller — a move that would risk setting off a constitutional crisis — but few have threatened specific consequences if the president does so.

One exception was Senator Lindsey Graham of South Carolina, who was asked Tuesday whether firing Mueller would be an impeachable offense.

“Probably so, if he did it without cause,” Graham said on commentator Hugh Hewitt’s radio Show. If Trump stopped an investigation into whether his campaign colluded with Russia, he said, “I can’t see it being anything other than a corrupt purpose.”

McConnell has done his best to avoid addressing the Mueller probe. On Tuesday, he backed Mueller but brushed aside questions about legislation aimed at protecting the special counsel from being fired. He’s been trying to strike a complicated balance in light of Trump’s popularity among Republican voters and his toxicity among Democrats and independents, who could help Democrats win the House in congressional elections later this year.

“We anticipate him finishing the job and telling the American people what they to know about this episode,” he said.

House Speaker Paul Ryan told reporters Tuesday that Mueller should be allowed to complete his work.

“I’ve received assurances that his firing is not under consideration,” Ryan said, although he didn’t say who offered those assurances.

Lawmakers took some comfort in statements from Trump attorney Ty Cobb and White House officials that Trump wasn’t planning to fire Mueller. But Trump continued to attack the investigation as a “witch hunt,” and he hired Joseph diGenova, a former federal prosecutor who has said Trump is the victim of a “brazen plot” by the FBI and the Justice Department. DiGenova also has repeatedly criticized the Trump appointee who oversees Mueller’s probe, Deputy Attorney General Rod Rosenstein.

Back in January, McConnell said he saw no need to pass proposed legislation to protect Mueller because he knew of no “official” White House effort to undermine him. That position is no longer tenable, some Democrats said.

“The presumption of that response has now been exploded by both the president and his lawyers,” said Senator Sheldon Whitehouse of Rhode Island, a senior Democrat on the Judiciary Committee.

For one thing, the White House was slow to try to defuse Trump’s attacks on Mueller. It took more than 24 hours for Cobb to issue his statement saying Trump had no plans to fire the special counsel.

DiGenova’s addition to Trump’s team is a signal that Trump’s lawyers don’t see the probe ending soon. It may also reflect growing dissatisfaction by Trump with his lawyers’ be-patient assurances that he should let the Mueller probe take its course.

Cobb had said since the summer that the investigation wouldn’t stretch beyond the end of 2017. Trump and his legal team have been cooperating with the Mueller probe so far and have been negotiating terms for Mueller to interview Trump.

Senator Jeff Flake of Arizona, perhaps Trump’s most prominent Republican critic in the Senate, said he hoped his party’s leaders would speak out for Mueller.

“I’ve always felt, and a lot of my colleagues have said privately, that’s the red line we can not cross,” Flake said Monday. “I hope that leadership stands up and is more forceful in saying, ‘Don’t go there.”’

The attacks have alarmed a number of Senate Democrats, some of whom are pressing their colleagues not just for statements but also to back legislation.

Whitehouse said the attacks on Mueller should prompt a markup in the Judiciary Committee on legislation to protect Mueller’s job. Bipartisan bills requiring judicial oversight of any effort to fire a special counsel received a hearing on Sept. 26.

The Democratic sponsor of one of the bills, Richard Blumenthal of Connecticut, said he’s going to press hard this week for action — maybe even on the must-pass omnibus spending bill needed to keep the government open past Friday night.

Can Trump Dismiss the Special Counsel? Not Exactly: QuickTake

Democratic Senator Chris Coons of Delaware said he’ll also push for a bipartisan statement warning of consequences if Trump fires Mueller, noting that the president previously said he wasn’t about to oust Secretary of State Rex Tillerson, only to go ahead and fire him.

“Clearly stating to the president what the consequences would be, how seriously we would take that, is something I’m going to be working relentlessly on this week, and trying to find Republican partners willing to do that,” Coons said.

Senate Judiciary Chairman Chuck Grassley has urged the proponents of the two bills aimed at preventing Mueller’s dismissal without cause to negotiate a compromise, according to Grassley spokesman George Hartmann.

“It appears that some recent progress has been made along these lines,” Hartmann said, but he added that “the constitutionality of legislation that affects the executive’s ability to appoint and remove members of the executive branch remains an important concern.”

The lead sponsors of the bills are Republican Senators and Thom Tillis of North Carolina, both of whom have reiterated their opposition to firing Mueller since Trump’s new attacks over the weekend.

The No. 2 Senate Republican leader, John Cornyn of Texas, said he doesn’t think lawmakers need to do anything yet because he doesn’t believe Trump will act.

“Obviously, legislation requires a presidential signature. I don’t see the necessity of picking that fight right now,” he said.

While conceding Trump’s attacks on Mueller aren’t helpful, Cornyn said the message has been sent to the president many times, formally and informally, that he shouldn’t fire Mueller.

But like most Republicans, he wouldn’t name a specific consequence Trump would face if he went ahead and did it anyway.

Democrats aren’t unanimous in their worries.

Dianne Feinstein, the top Democrat on the Senate Judiciary Committee, said she was heartened by seeing Republicans like House Oversight Chairman Trey Gowdy speaking out over the weekend against any effort to shut down the Mueller probe.

“I don’t think we need it,” she said of the legislation to protect Mueller. “I was listening to various comments even from Republicans like Trey Gowdy. And people felt very strongly it would be a major breach for the president to fire Mr. Mueller. I agree with that.”

Efforts to remove him “would rip apart this administration,” Feinstein predicted.

And Graham, who warned over the weekend that firing Mueller would be the beginning of the end of Trump’s presidency, says he’s not worried either.

“I have zero concerns that the president or his team is going to fire Bob Mueller,” he said. “Zero.”

If that did happen, he predicted Congress would step in and reinstate Mueller.

“If he got fired without cause, there would probably be an effort to reinstate him as an independent counsel,” he said, although it’s not clear whether such a push could overcome a presidential veto. 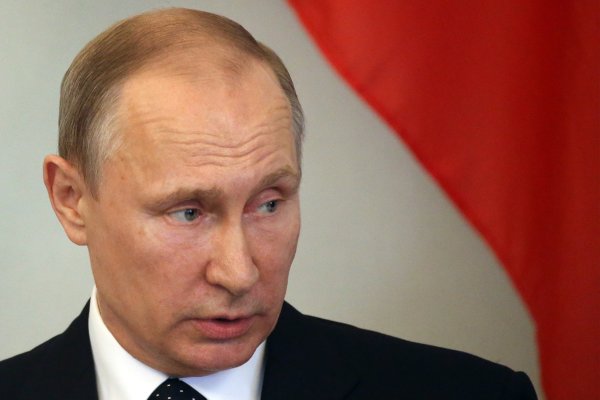 Putin Criticized for Remarks Insinuating Jews and Other Minority Groups Could Be Behind U.S. Election Interference
Next Up: Editor's Pick