More Than 4,000 Flights Are Cancelled Due to Winter Storm Toby. Here’s What Affected Travelers Need to Know

Thousands of flights were cancelled across the country Wednesday as another Nor’easter storm hit the East Coast — making Winter Storm Toby the fourth of its kind to do so this month.

As they did with recent storms, airports and airlines cancelled flights and waived change fees due to Winter Storm Toby, which was dubbed the “Four’easter”.

Winter Storm Toby started in the South Tuesday — the first day of spring — and moved up the East Coast early Wednesday — bringing strong winds, coastal flooding and wet snow to the East Coast, spanning from northern Virginia to northern Massachusetts, and coming from the Ohio Valley. New York City, Baltimore and parts of Viriginia could all get more than a foot of snow by the time Winter Storm Toby ends early Thursday morning.

While the storm itself isn’t as strong as previous weather events this March, according to The Weather Channel, airlines and airports prepared for severe weather and potential flight cancellations.

By Wednesday afternoon, LaGuardia Airport in New York had already cancelled 73% of its Wednesday flights. The Queens-based airport tweeted Wednesday that all flights departing or arriving from LaGuardia would likely be cancelled due to Winter Storm Toby.

It’s possible more flights will be cancelled as Winter Storm Toby continues to wind up the coast Wednesday. Here are all the airlines offering to waive change fees for affected passengers and their policies on weather-related cancellations.

American Airlines is offering to waive change fees for passengers scheduled to travel to, from or through a number of East Coast states, including New York, Maryland, Washington, D.C., and Rhode Island, among others, from March 20-21.

Passengers can re-schedule flights to depart anytime from March 18 through March 25 for free, so long as they do not change their origin or destination.

This time around, Delta is using its winter weather waiver to eliminate change fees for passengers traveling to, from or through East Coast states between March 20-21. Customers hoping to change their flights for free must schedule them to depart on or before March 25 to avoid fees.

United Airlines is waiving fees for passengers changing their flights scheduled to take off between March 20-21 from, to or through Maryland, Massachusetts, Connecticut, Pennsylvania, New York, Maine, Rhode Island and Washington, D.C. Passengers must rebook their flights to take off on or before March 24 to avoid any fees.

Southwest Airlines sent out warnings that its flights taking off from, to, or through airports in Baltimore, Philadelphia, Pittsburgh, Washington, D.C., New York and Boston, among others, could be delayed, diverted or cancelled due to the storm.

Customers looking to change their flights scheduled to depart March 20-22 can do so without paying a fee as long as the new flights take off within 14 days of the original travel date.

Passengers scheduled to take off, or travel to or through, Baltimore, Boston, New York, Philadelphia, Washington, D.C., or Newark, N.J. on Alaska Airlines from March 20-22 can rebook their tickets for flights departing on or before March 28 without getting a change fee.

Spirit Airlines customers scheduled to travel to, from or through Atlantic City, Baltimore, New York, Philadelphia, Pittsburgh, or Newark, N.J., from March 20-21 can change their flights to depart on or before March 24 without a fee. Passengers on flights heading from, to, or through Boston and Hartford, Conn., on March 21 can reschedule flights for free to depart on or before March 24 as well.

Passengers heading to, from or through airports in New York, Philadelphia, Washington, D.C., Providence, R.I., and Trenton, N.J. on March 20-21 with Frontier Airlines can change their flights with no fees so long as the flight is scheduled to depart on or before March 30. 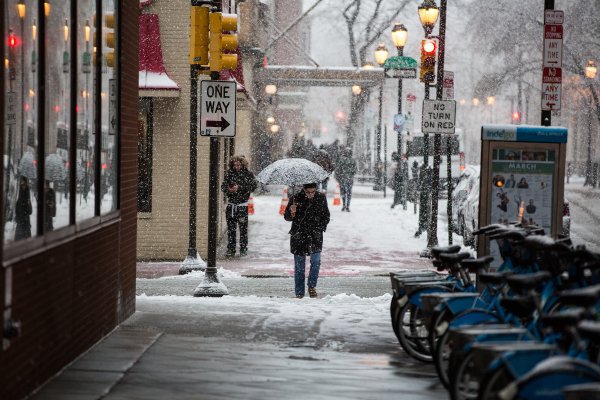 There Could Be a Snow Storm on the First Day of Spring
Next Up: Editor's Pick