Sean Penn Talks His Debut Novel and His Fears for #MeToo

Actor and activist Sean Penn makes his debut as a book author with 'Bob Honey Who Just Do Stuff'
Presley Ann—Getty Images
Ideas
By Nate Hopper
Hopper is a former Ideas Editor for TIME.

On March 27, Sean Penn will make his debut as an author with his satirical novel, Bob Honey Who Just Do Stuff. To mark the occasion, the philanthropist and two-time Academy Award–winning actor famous for his roles ranging from Fast Times at Ridgemont High to Milk to Mystic River spoke with TIME about the themes of the book, the #MeToo movement, President Donald Trump and Haiti.

The main character of your book is a mercenary who opposes a Trumpian figure. Do you share Bob Honey’s worldview? I wrote this book to get myself away from my own worldviews. And that doesn’t mean that they are or are not expressed in the book. It’s up to the reader to decide.

Bob drafts a letter to the Trumpian character saying, “We are a nation in need of an assassin.” Are you worried that will be read as you advocating for the assassination of President Trump? No, I’m not worried about that. I think if anybody believes by reading this that I am advocating for something like that, then they are really not getting that right. This is satire.

Bob targets the elderly. Do you fear getting old? No, I am in a hurry to get old. I’ve always had it in my head that I’m 77 years old. Now I don’t know that I’ll make it to that. I’ve done a little too much smoking. But I do feel more at ease with the world the older I get, despite the fact that the world itself is becoming increasingly challenging.

When you picture your life as a 77-year-old, what do you see? I think I run a bed and breakfast, and I keep a good bottle of Haitian rum under a blanket over my legs, in a wheelchair. I am not committed to the wheelchair, but I use it because I could get away with it. And I’m very selective about who can stay at the bed and breakfast.

What can books do that movies can’t? Put the vision in the hands of the reader. Film has often been called the director’s medium. And a writer kind of gets lost in that, often. With a book, you’ve got a writer and a director — and the director is the reader.

What did you think when the President described Haiti as a “sh-thole”? I just know so many people who would have been hurt by it, who have lived a hardship that that man’s never known. The indignity of his indulgence in his own flamboyance and minor brain is cheapening the air we breathe. And the fact that this Congress is tolerating him, the fact that anchors on news stations aren’t pulling the fire alarm. We passed the Paddy Chayefsky moment about a year ago, when the screaming “I’m mad as hell, and I’m not going to take it anymore” should have been. I used the book to keep myself from [falling into] the worst thoughts that Bob expresses. When it comes to Sean Penn talking for Sean Penn these days, I even feel that I want to use less flamboyant language than I have, and I’m not a politician.

You write in the novel “words are as lethal as any weapon” and “public yearning” has “now become an insatiable hunger bent on having one’s own insecurity empowered.” Is there a cure to that? Well, I think we’ve got to hit quite a challenging restart button if we’re going to cure that in this culture. I think that we are seeing people in great pain be dubbed heroes. There’s goddamn nothing to criticize about someone being a victim. On the contrary, there’s something to hug and to cure. But I don’t know if throwing the word hero around should apply in some of these circumstances. And I try to write about that a little bit also. Heroism is a funny thing, in that it’s often circumstantial and we see the best of humankind respond in ways that can make us weak with courage. I don’t know that we’re in a conversation that these flamboyant terms of reverence are helping very much.

In the poem that makes up the epilogue of the book, the phrase “#MeToo” is described as “infantilizing.” And it says that the “toddlers’ crusade” might end up “reducing rape, slut-shaming, and suffrage to reckless child’s play.” Could you explain that further? Well, I think that as a writer expressing myself freely, allowing myself to freely write within the brain of Bob, that there is an argument to be made that Bob would find familiar, those two words put together, “me too,” the three-year-old who wants a toy because his brother got one is “me too, me too.” And so I think that’s what that is. That’s Bob singing.

The lines that follow-up that section of the poem ask if “Due process has lost its sheen?” After Steve Wynn resigned from his hotel and casino company over sexual-harassment allegations, Trump asked a similar question. What do you make of that overlap? A broken watch has perfect time once a day. There will always be alignments to be found. I think it’s really, like most things, in the personality where the difference lies. So why things are said and in what context they’re said. Certainly there is, in all of us, contradiction.

Do you personally have criticism of how #MeToo has taken shape? I personally have hopes that it moves more into baby steps, simply because I want it to win. I fear that when groupthink becomes a media legislation of free speech, and a social media jury to convict anyone, it is no longer an American process, which is a due process. I think the greater issue here is that there are very serious changes that society needs to make to improve life for women, for homosexuals, for immigrants.

In 2016, you settled a defamation suit with director and producer Lee Daniels, who insinuated that you had been violent toward Madonna during your marriage. (Daniels retracted his statement.) Has that experience affected your impression of #MeToo? Yeah. Listen, it wasn’t only that. As militant as anybody chooses to be on any subject, so shall I be on my right to healthy skepticism. Skepticism is more necessary and valuable than any blind belief anybody has about anything. No matter what issue we’re talking about, I believe every black person can have a point of view on a white person that is legitimate to express. Every man who has a point of view on women’s issues, it is legitimate to express, and vice versa. We’ve got to be a “we” at some point. Once good intentions start forcing everybody into camps, the strategy is off. And then things get worse. We talk about trauma so quickly, and then all of a sudden you see what these 15-, 16- and 17-year-olds go through down there in Parkland. And then you think about what these kids are experiencing in Yemen. And if we get all one-issue about this sh-t and divide each other over it or the way we’re allowed to talk about it, and people take some kind of high ground like only Danish princes can play Hamlet, then we’ve lost the joy of life. 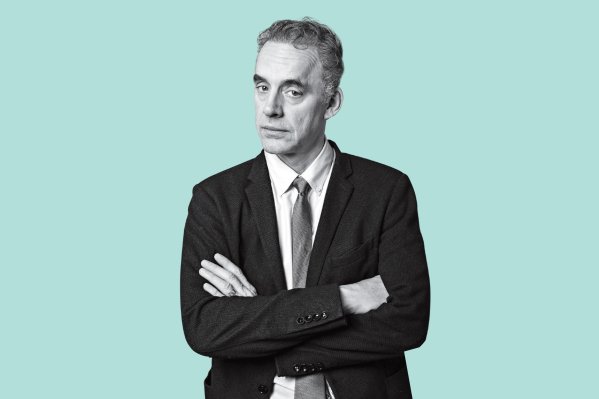 Why Jordan Peterson Thinks Frozen Is Propaganda, But Sleeping Beauty Is Genius
Next Up: Editor's Pick