Apple Inc. is designing and producing its own device displays for the first time, using a secret manufacturing facility near its California headquarters to make small numbers of the screens for testing purposes, according to people familiar with the situation.

The technology giant is making a significant investment in the development of next-generation MicroLED screens, say the people, who requested anonymity to discuss internal planning. MicroLED screens use different light-emitting compounds than the current OLED displays and promise to make future gadgets slimmer, brighter and less power-hungry.

The screens are far more difficult to produce than OLED displays, and the company almost killed the project a year or so ago, the people say. Engineers have since been making progress and the technology is now at an advanced stage, they say, though consumers will probably have to wait a few years before seeing the results.

The ambitious undertaking is the latest example of Apple bringing the design of key components in-house. The company has designed chips powering its mobile devices for several years. Its move into displays has the long-term potential to hurt a range of suppliers, from screen makers like Samsung Electronics Co., Japan Display Inc., Sharp Corp. and LG Display Co. to companies like Synaptics Inc. that produce chip-screen interfaces. It may also hurt Universal Display Corp., a leading developer of OLED technology.

Display makers in Asia fell after Bloomberg News reported the plans. Japan Display dropped as much as 4.4 percent, Sharp tumbled as much as 3.3 percent and Samsung slid 1.4 percent. Shares in Apple were down 1.3 percent during early trading at 5:21 a.m. in New York.

Controlling MicroLED technology would help Apple stand out in a maturing smartphone market and outgun rivals like Samsung that have been able to tout superior screens. Ray Soneira, who runs screen tester DisplayMate Technologies, says bringing the design in-house is a “golden opportunity” for Apple. “Everyone can buy an OLED or LCD screen,” he says. “But Apple could own MicroLED.”

None of this will be easy. Mass producing the new screens will require new manufacturing equipment. By the time the technology is ready, something else might have supplanted it. Apple could run into insurmountable hurdles and abandon the project or push it back. It’s also an expensive endeavor.

Ultimately, Apple will likely outsource production of its new screen technology to minimize the risk of hurting its bottom line with manufacturing snafus. The California facility is too small for mass-production, but the company wants to keep the proprietary technology away from its partners as long as possible, one of the people says. “We put a lot of money into the facility,” this person says. “It’s big enough to get through the engineering builds [and] lets us keep everything in-house during the development stages.”

Right now smartphones and other gadgets essentially use off-the-shelf display technology. The Apple Watch screen is made by LG Display. Ditto for Google’s larger Pixel phone. The iPhone X, Apple’s first OLED phone, uses Samsung technology. Phone manufacturers tweak screens to their specifications, and Apple has for years calibrated iPhone screens for color accuracy. But this marks the first time Apple is designing screens end-to-end itself.

The 62,000-square-foot manufacturing facility, the first of its kind for Apple, is located on an otherwise unremarkable street in Santa Clara, California, a 15-minute drive from the Apple Park campus in Cupertino and near a few other unmarked Apple offices. There, about 300 engineers are designing and producing MicroLED screens for use in future products. The facility also has a special area for the intricate process of “growing” LEDs.

Another facility nearby houses technology that handles so-called LED transfers: the process of placing individual pixels into a MicroLED screen. Apple inherited the intellectual property for that process when it purchased startup LuxVue in 2014.

About a year after that acquisition, Apple opened a display research lab (described internally as a “Technology Center”) in Taiwan. In a test to see if the company could pull off in-house display manufacturing, engineers in Taiwan first built a small number of LCD screens using Apple technology. They were assembled at the Santa Clara factory and retrofitted into iPhone 7 prototypes. Apple executives tested them, then gave the display team the go-ahead to move forward with the development of Apple-designed MicroLED screens.

The complexity of building a screen manufacturing facility meant it took Apple several months to get the California plant operational. Only in recent months have Apple engineers grown confident in their ability to eventually replace screens from Samsung and other suppliers.

In late 2017, for the first time, engineers managed to manufacture fully functional MicroLED screens for future Apple Watches; the company aims to make the new technology available first in its wearable computers. While still at least a couple of years away from reaching consumers — assuming the company decides to proceed — producing a functional MicroLED Apple Watch prototype is a significant milestone for a company that in the past designed hardware to be produced by others.

The latest MicroLED Apple Watch prototypes aren’t fully functioning wearables; instead the screen portion is connected to an external computer board. The screens are notably brighter than the current OLED Watch displays, and engineers have a finer level of control over individual colors, according to a person who has seen them. Executives recently approved continued development for the next two years, with the aim of shipping MicroLED screens in products.

It’s unlikely that the technology will reach an iPhone for at least three to five years, the people say. While the smartphone is Apple’s cash cow, there is precedent for new screen technologies showing up in the Apple Watch first. When it was introduced in 2014, the Apple Watch had an OLED screen. The technology finally migrated to the iPhone X last year.

Creating MicroLED screens is extraordinarily complex. Depending on screen size, they can contain millions of individual pixels. Each has three sub-pixels: red, green and blue LEDs. Each of these tiny LEDs must be individually created and calibrated. Each piece comes from what is known as a “donor wafer” and then are mass-transferred to the MicroLED screen. Early in the process, Apple bought these wafers from third-party manufacturers like Epistar Corp. and Osram Licht AG but has since begun “growing” its own LEDs to make in-house donor wafers. The growing process is done inside a clean room at the Santa Clara facility.

Engineers at the facility are also assembling prototype MicroLED screens, right down to attaching the screen to the glass. The backplanes, an underlying component that electronically powers the displays, are developed at the Taiwan facility. Apple is also designing its own thin-film transistors and screen drivers, key components in display assemblies. Currently, the Santa Clara facility is capable of manufacturing a handful of fully operational Apple Watch-sized (under 2 inches diagonally) MicroLED screens at a time.

Until MicroLED is ready for the world to see, Apple will still — at least publicly — be all-in on OLED. The company plans to release a second OLED iPhone in the fall, a giant, 6.5-inch model, and is working to expand OLED production from Samsung to also include LG. 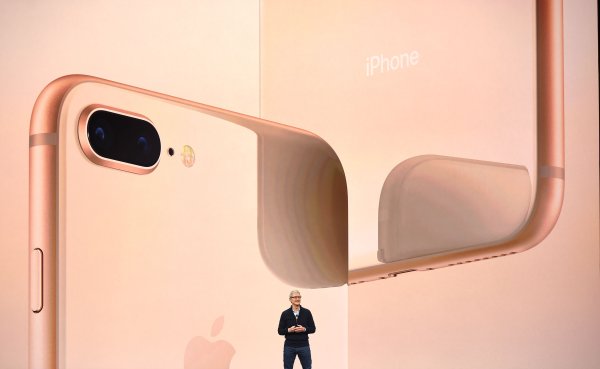 3 Things Apple May Announce at Its Next Big Event
Next Up: Editor's Pick