President Donald Trump speaks to reporters before boarding Marine One on the South Lawn of the White House in Washington on March 13, 2018.
Andrew Harnik—AP
By Philip Elliott

One activity has united members of Donald Trump’s Administration this week: updating the résumés.

A sense of looming massive change hung over the White House this week, surpassing the typical day-to-day anxiety of the Trump era. The political pressure-cooker tested just how much steam could be contained inside the pot. From Cabinet secretaries to staff assistants, those working in the Trump orbit have been checking Twitter, internal emails and knocks on their doors nervously to see if the President had axed them as part of what he says is the pursuit of an executive branch he actually likes.

“We’re getting very close to having the Cabinet — and other things — that I want,” Trump told reporters on Tuesday, just hours after he fired America’s top diplomat via tweet.

Trump never let up on that drumbeat all week, even as his aides did their best to muffle it.

“People shouldn’t be concerned. We should do exactly what we do every day, and that’s come to work and do the very best job that we can. And that’s as exactly what we’re doing,” White House press secretary Sarah Huckabee Sanders said Friday during a briefing that was largely dominated by questions about who was still going to have jobs come Monday morning.

This drama — and the non-stop coverage — is very much to the President’s liking. After all, Trump is keenly attuned to his media persona and is a former reality television host. The image of him as a tough but unpredictable executive is one he enjoys. Chaos is good for ratings. Cliffhangers are better.

Read More: Where Are They Now? A Guide to Former Trump Administration Staffers

To understand just how pitched the worry has become, consider that White House chief of staff John Kelly spent part of Friday morning assuring aides that — contrary to what Trump was suggesting in many, many phone calls to friends that, of course, were leaked to reporters — a purge was not imminent. No one’s role is permanent in Trump’s orbit, Kelly told senior White House aides, but there were no reasons to think anyone would be clearing out the desk this afternoon.

Pass it along, Kelly told his top West Wing lieutenants. They did, but few believed it.

Kelly later told some colleagues that he understood why so many people inside the Administration — and reporters outside it — expected more changes: it’s what the President has spent the week hinting was coming. These were the headlines he wanted to read.

Kelly, whose own job is said to hang in the balance, couldn’t really fault the coverage, even as it overshadowed other priorities. Aides and reporters weren’t reading tea leaves or gossip. They were reading transcripts and tweets of the President’s own words.

“What’s the point in obsessing over something you can’t control?” asked one former Administration official.

Trump began his week firing his long-suffering Secretary of State on Twitter, just hours after Rex Tillerson returned early from a trip to Africa and a day after Trump took heat for walking away from his pledge to do something to combat gun violence. Trump tweeted Tillerson was out, then visited with reporters on the White House’s South Lawn before ditching Washington for three days — leaving behind hundreds of aides worried if they were next and burying headlines about school shootings.

This is Trump unchained. Last week, Trump bragged that he didn’t consult with Tillerson ahead of an announcement that the United States would meet with North Koreans for talks about nuclear programs. Trump puffed his chest a bit and said he didn’t need to hear Tillerson’s views; they had disagreed so long that there was no point in it.

He continued this go-it-alone approach when he dictated the dismissal of Tillerson. It took 208 characters on Twitter to fire Tillerson, promote CIA director Mike Pompeo into the role of diplomat-in-chief and nominate a career intelligence officer to by the nation’s top spy.

Privately, those steeped in national security pressed senior White House aides if perhaps the President didn’t understand that many American diplomats abroad already are suspected of being covert spies, and putting a former spymaster in charge of the State Department would quickly put all diplomats under suspicion. The best response they could get was a shrug. Trump had made up his mind.

White House officials say this is what a President increasingly confident in his own abilities and instincts looks like. As one White House official described it, “The President feels he’s got this now.” For the President, there are two choices for those who want to keep their jobs: “Fall in line with the President’s agenda or leave. We aren’t having meetings just to have them any more.”

That sentiment has been clear in recent weeks. Trump’s chief economics adviser Gary Cohn argued strongly against a series of tariffs Trump sought on steel and aluminum. Trump announced them unexpectedly and Cohn moved toward the exits.

Cohn’s exit created an opening. The official replacement for Cohn will be Larry Kudlow, a longtime television commentator who holds an undergraduate degree in history and left Princeton before finishing his graduate work. The made-for-TV persona will mesh with Trump’s value of fame over footnotes, and loyalty above all.

Trade adviser Peter Navarro, already in the White House, told Bloomberg that his job is to find justification for Trump’s beliefs. “My function, really, as an economist is to try to provide the underlying analytics that confirm his intuition,” Navarro said. “And his intuition is always right.”

An example of this need came when the President wrongly claimed, and then doubled-down on, the idea the United States has a trade deficit with Canada. That is not the case, but White House officials went to work slicing data in a way to back up the President’s false claim. Few beyond the President bought it.

All of this has left White House and Administration officials exhausted and fretful for what comes next. Morale has never been high in the White House, but it’s near its nadir. This week’s loss in a special congressional election — in a district Trump carried by 20 percentage points — shook the political professionals at the White House, and Trump didn’t seem to get its impact. Instead, he sought to bump it off the front page with the Tillerson news.

Trump was phoning his friends outside the White House to ask them to grade his top staff. Trump has long done this, and it often serves as a prelude to staff shake-ups. Trump expects many of these conversations to leak quickly, White House officials say begrudgingly. (For all of the bluster Trump enjoys, he has proven averse to confrontation. Trump didn’t tell Tillerson he was canned until hours after the tweet made clear he should start packing his desk.)

Trump also queried his pals about what they thought about budget chief Mick Mulvaney, Energy Secretary Rick Perry, EPA Administrator Scott Pruitt and Fox News contributor Pete Hegseth — all potentially due for bigger gigs in the Administration should Trump reshuffle his team.

Senior White House officials have turned to gallows humor to cope with the turmoil. One veteran aide said it was as though Trump was ready to shift production teams, dumping the men and women who helped him in the first year and starting afresh: “It’s now Season Two.”

At the same time, Trump has a keen understanding of the media ecosystem — how long reporters and Twitter will stay on a story before they start to dig a little deeper than Trump wanted, and what could drive the audience into a different direction. Tillerson’s departure was brutal for the State Department but dominated headlines for the first part of the week.

Then, as it became known Special Counsel Robert Mueller had issued subpoenas for Trump’s businesses, the President started to fan suspicions he was looking to overhaul his Cabinet. The masterful media manipulator knew the value of misdirection.

Trump loyalists, of course, defend the President’s unconventional behavior this week. He is the President and can ask anyone for advice. The changes being considered, they say, suggest the President has gotten his sea legs under him and no longer wants to be constrained by how things were done in the past. For instance, he has become quite the consumer of government economic indicators that arrive at the White House ahead of public release.

More broadly, Trump has been keeping a running tally of norms he has broken — over the advice of men he calls “the so-called experts” — with results that deviate from predictions. For instance, his election in 2016 didn’t decimate the economy, moving the U.S. Embassy from Tel Aviv to Jerusalem didn’t cause global chaos, his demands for a border wall didn’t crippled U.S.-Mexican relations and his hostility toward Congress didn’t derail last year’s tax cuts or delay Neil Gorsuch’s confirmation to the Supreme Court.

But that was Year One, or Season One as the veteran aide put it. The rules are changing in Season Two. The honeymoon with Congress is over, and many Senate Republicans aren’t eager to turn over the calendar to confirmation hearings from Trump’s recasting. North Korea is closer than before to having a nuclear weapon that can strike the United States. The stock market is boosting the wealth of investors. Russia is not backing down. All are fragile.

White House officials offered seemingly contradictory messages on changes. They said Trump wouldn’t have his hands tied, all while adding there were “no immediate personal changes” to announce.

Yet when McMaster, a three-star Army officer who is serving as Trump’s National Security Adviser, was spotted on the White House driveway on Friday, he faced questions if he was indeed heading to the doors as reports suggested despite White House denials.

McMaster dodged. “Everybody has got to leave the White House at some point,” he told ABC News.

For senior officials, though, the question was whether some point was soon. As Friday evening arrived, they still did not have an answer. 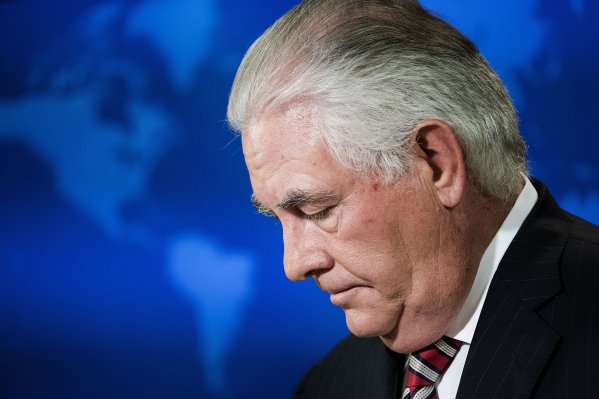 Why President Trump Fired Rex Tillerson
Next Up: Editor's Pick