Vladimir Putin Is About to Win a Fourth Term. Here's What He's Promised Russia

Rumor has it that Russian President Vladimir Putin struggled mightily to come up with a compelling campaign platform in the runup to Russian elections this weekend—18 years in power can have that effect. But Putin’s trudge towards the polls raises a fascinating question: what do you run on when you’ve already effectively won? Here are the four areas he’s talking about— and what he’s avoiding.

Like all political candidates up for reelection, Putin’s first order of business is to convince voters that their daily lives have improved under his stewardship. And given that Putin came to power in the late 1990s—when Russia was still struggling (putting it charitably) to transition into a free-market economy—that’s quite easy for Putin to do. Back in 2000, 42 million Russians were living below the poverty line; today, less than 20 million do. Russian life expectancy in 2000 was 65.5 years, today it’s 73. Under Putin, Russia’s minimum wage has also grown substantially and will be raised again on May 1.

These are legitimate wins for Putin. But problems persist—20 million Russians living in poverty is still 20 million too many, and Putin has vowed to bring those numbers down. Raising the minimum wage was a primary focus of Putin’s during his first decade in power, but that too has stagnated in recent years (Kremlin rhetoric aside). And while life expectancy increasingly is unabashedly good news, it means that pensions will need to be paid out for longer—at a time of strapped government finances.

Pledge #2: Keeping unemployment and inflation down

Those strapped finances pose a serious problem for Putin. Back in 2000, Russia’s GDP stood at roughly $260 billion (in current USD); today it’s at about $1.28 trillion, roughly a 5-fold increase. That alone would probably be enough to ensure Putin’s reelection, except for the fact that nearly $1 trillion has been wiped off the headline GDP number since 2013 following the ruble’s devaluation—a result of so much of Russia’s wealth being tied to its vast oil and gas reserves. That was all fine when the price of oil was well north of $100 a barrel; it’s a lot worse when oil prices are mired in the $60 range.

Still, Putin has plenty to tout. Unemployment has fallen from 10.6 percent in 2000 to 5.3 percent today. Perhaps even more significant, inflation—which hit near 21 percent in 2000—has stabilized near a much more manageable 4 percent in 2017. But the problem remains: Russia relies too heavily on gas and oil for its economic performance. The country overall is also too dependent on Moscow for federal funds—in 2017, just 14 of the country’s 83 regional governments gave Moscow more money than they took in subsidies. That’s a problem when you’re building a modern, 21st-century economy—though admittedly less of a problem when you’re building a cult of personality around one leader.

Just as important as those qualitative improvements in Russian lifestyles? Putin’s ability to restore a sense of pride to the Russia people, which hit an (understandable) nadir following the collapse of the USSR. For many Russians, he’s delivered.

Putin’s landgrab of Crimea and support for separatists in the Donbas region of Ukraine took any realistic option of Ukraine joining NATO off the table (if it were ever there)—NATO’s expansion eastward being a major source of anxiety for Russia. Putin’s decision to prop up Bashar Assad in Syria—in the process protecting Russia’s sole deep-water port in the Mediterranean—telegraphed to the world that Russia remains a serious player in the Middle East, and made it impossible to end the war without talking to Moscow. And Russia’s recent forays into election interference has set the entire West on edge, proving Russia is still a geopolitical force to be reckoned with.

But those victories have been costly. Crimea netted Moscow little of concrete strategic value, but has managed to thoroughly enrage an entire generation of young Ukrainians not old enough to really remember USSR life under Moscow’s thumb. Russia’s success in Syria now means it will need to remain there if it wants to preserve its hard-fought gains. Good luck with that. And while ridiculing the West’s faith in democracy may be plenty of fun for Putin at the moment, it’s also been accompanied by sanctions that have taken a real bite out of the Russian economy. They won’t go away anytime soon.

Then there’s tech. If you caught Putin’s “state of the federation” speech a couple weeks ago, you may have been surprised to hear Putin talk of an “invincible” nuclear weapon, accompanied by a video simulation that included a shot of warheads heading toward Florida. For Putin, technology and security are intertwined—that makes sense given that from a state perspective, only the military has consistently enjoyed generous government spending and R&D. There was a brief moment in 2009 when Putin’s political stand-in Dmitri Medvedev launched the Skolkovo Innovation Center as an aspirational competitor to Silicon Valley, complete with tax breaks for start-ups. But Skolkovo was a prestige project with limited scope. Russia’s burgeoning tech industry, with competitors to Google like Yandex and well-developed social media, hold promise but must navigate Russia’s difficult business environment. A real focus on technology is not just a luxury in the 21st century, it’s a must-have—especially when 350,000 Russians emigrated from their home country in 2015 alone, a tenfold increase from 2010 figures.

What Putin isn’t talking about

As the half-hearted campaign rounds into its final days, more can actually be gleaned by what Putin hasn’t said on the political trail. He doesn’t talk much about corruption because it remains rampant in the country (Russia ranks 135 on Transparency International’s 2017 Corruption Perceptions Index, tied with Mexico and Honduras). He doesn’t talk all that much about China’s growing influence in the same Eurasian region for which Putin fought so hard for an economic union, a footprint that will only get bigger as Beijing’s ambitious infrastructure One Belt One Road project takes off. Special counsel Robert Mueller’s investigation into Russian interference in the U.S. elections barrels on, and while Putin publicly dismisses the investigation, it may yet provide impetus for even more sanctions.

But the biggest problem Putin faces this week? A decided lack of enthusiasm among the Russian electorate. A year ago Putin was reported to be aiming for a 70/70 split—a 70 percent turnout for the election, with 70 percent of those folks casting a vote for Putin. But it’s highly unlikely that 70 percent of Russians make it to the polling booths — though it is likely that somewhere near 70 percent of those that do will vote for Putin. He may not like it, but he’ll take it—it’s not like he has a lot of options at this point. Then again, neither do the Russian people. 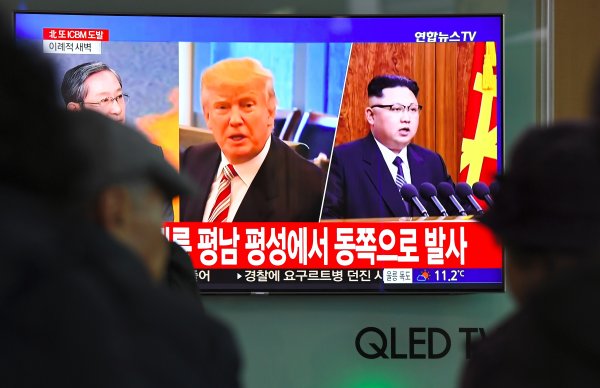 The Reasons for Hope — and Worry — Before Trump Meets Kim Jong Un
Next Up: Editor's Pick