Only One Man Was Found Guilty for His Role in the My Lai Massacre. This Is What It Was Like to Cover His Trial

It was 50 years ago — on March 16, 1968 — that a group of American troops killed hundreds of civilians at the hamlet of My Lai, in what would become one of the most infamous atrocities of the Vietnam War. Months passed before the news of that event began to spread, and it would be years before anyone involved would face possible punishment. Though several of the men involved faced courts-martial, only one—1st Lieut. William Laws Calley Jr.—was ever convicted. He was found guilty in 1971 of murder and sentenced to life. (President Nixon changed Calley’s sentence to house arrest, and he served about three years. He apologized in 2009.)

As the trial dominated the national conversation, TIME Correspondent Peter Ross Range was dispatched to get to know the man behind the headlines. As TIME noted in 1971, he was the only reporter to speak to Calley after the conviction. The lieutenant’s last words to him, the magazine reported, were, “Take care, Pete.” Now, a half-century after the massacre, Range recalls what it was like to have an inside view of the case:

When the story broke that American troops had committed the massacre at My Lai on March 16, 1968, I was in Germany reporting for TIME on the student movement. Even there, the Vietnam War was a focus. At that time the great symbol of everything that was wrong with the war was the Eddie Adams photograph of the police chief executing the Viet Cong operative on the streets of Saigon, and in Germany that remained the iconic image. But when the My Lai photographs were first published in the Cleveland Plain Dealer and then in LIFE Magazine, they rocked America and re-energized the U.S. anti-war movement.

By the time I came back to the States in early 1970, Lt. William Calley was about to go on trial over his role in the massacre. TIME had stationed me in Atlanta, so I was assigned to cover the trial, which was held at Fort Benning, Ga. The biggest question on everybody’s mind was, Who is this guy? Who is this monster that is now going to be seen in public every day at this trial? What could possibly have motivated him to do the things he is accused of?

I made it my business to try to answer that question. The only way I knew how to do it was by trying to get to know him. But in the case of a guy accused of mass murder, it seemed a daunting task at first.

I don’t remember exactly how I succeeded at gaining his confidence, but it came to a point where I was considered a trustworthy person, almost part of his inner circle of friends. The quid pro quo was that I was not going to ask direct questions about the trial or My Lai. That would have been the end of the relationship. Also, no lawyer would allow a client to talk to the press about the substance of a trial in the middle of that trial. So my goal was just to get to know Calley as a person and then hope that the relationship would lead to a more substantive conversation later on.

There was nothing about Rusty Calley, as he was called, that would make you say that he was an explosion waiting to happen. He didn’t have killer instincts. He didn’t love guns. None of that was the case. He was a young guy from South Florida who loved being around people and going to parties. He was fun to be around. He was not the kind of guy who should be commanding other men in warfare, in my view. But he was probably not the only one out there like that, either.

At the trial, his jury was made up of military men who knew what was going on. They had all served in combat. They knew the things that were wrong with the way operations happened, the miscommunications—and the underlying horror of this war, which was that you couldn’t tell who the enemy was. A lot of the things Calley said on the stand were true: the enemy could be the same person who was selling you rice in the morning, and they didn’t wear uniforms. But at the same time we have the famous story of the helicopter pilot, Hugh Thompson, who even from the air could see that something horrible was going on at My Lai, and landed to try to stop it. So obviously somebody could easily see there were things happening on the ground that shouldn’t be happening. Calley just didn’t have the training or the backbone to question the orders he thought he had been given.

You can see from the article that he did open up to me about certain matters, and I was the only reporter to talk to him after his conviction. I was also at his apartment the day that George Wallace showed up. That’s the other big part of the story as far as I’m concerned: how this became a major political event in America. The political story essentially overwhelmed the legal story in the end.

A huge body of American opinion was deeply offended by the idea that an American soldier who went out there in good faith could be put on trial for his life. It became kind of a Rorschach test of people’s political views and their feelings toward the war. It was already apparent before the trial started that people who opposed the anti-war movement, who were disgusted with the youth counterculture and the excesses connected to that, in their opinion, were also defensive about Calley. But it became more apparent as the trial went along. There came a point where I discovered that he was treated as a hero wherever he went. I was sitting with him in the Atlanta airport one time while he had a layover and an airline agent came up and just handed him a first-class boarding pass. When he went to cash a check in Tennessee, the bank president came out to shake his hand. He received more than 10,000 letters of support. That feeling only increased after his conviction, then the White House was inundated with mail objecting to Calley’s conviction.

The arguments among people who felt he was being made a scapegoat prompted the question on our cover: Who Shares the Guilt? What about Captain Medina, who was later acquitted? What about the higher-ups, all the way up to the commanding general? There’s no question that Calley was the man on the ground so he should stand trial, but there was a big question about the chain of command.

It was a horrible confluence of circumstances. You had a war going on that didn’t have the support of the country. They had to recruit whomever they could. They ended up putting guys in the field with guns in their hands who shouldn’t have been there—and the reality of war was nothing like what they had been prepared for.

As told to Lily Rothman 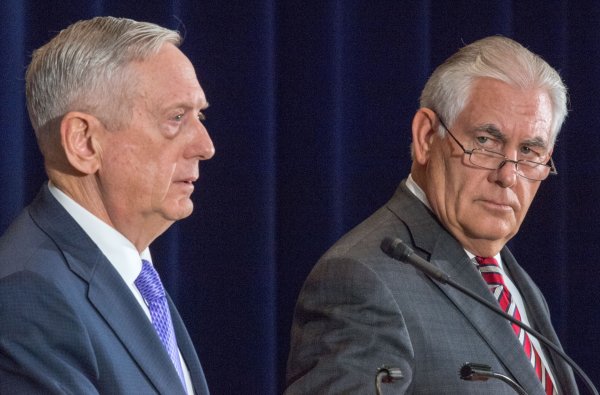 Trump's Defense Secretary Loses an Ally With Tillerson Firing
Next Up: Editor's Pick