Krysten Ritter on the Righteous Anger of Jessica Jones and #MeToo

Jessica Jones star Krysten Ritter thinks creator Melissa Rosenberg can predict the future. The gritty Netflix superhero series was the first of its ilk to get political: The first season tackled abusive relationships, and the second season, now on Netflix, deals with bad men, too. Rosenberg even wrote a specific subplot about a male movie producer who takes advantage of young girls. But the show finished filming long before the Harvey Weinstein allegations emerged or #MeToo went viral.

“Melissa was just writing what we all experience as women,” Ritter says. “Maybe now that we’re talking about it, this s–t won’t stand anymore.”

Jessica Jones’ emotionally resonant storytelling and political perspective paved the way for other superheroes to get political: Logan surprised audience with its examination of immigration policy, Black Panther and Luke Cage both took on issues of race and Wonder Woman tackled sexism. Now the show is back, and it has plenty more to say. Ritter spoke to TIME about the show’s politics and plot twists.

TIME: The first season was was dominated by Kilgrave, Jessica’s obsessive, mind-controlling ex. He’s largely absent from the second season. How does that change the show?

Krysten Ritter: Obviously, we don’t want to tell the same story. We don’t want to repeat ourselves. But the Kilgrave character and the mark he left on Jessica is really in the front of my mind all of the time. I try to layer what Jessica has gone through into the performance. The trauma she experienced affects everything. It affects how she walks, how she speaks, how she drinks, how she relates to her friends, how she hates herself. It’s always there.

Does carrying all that take a toll?

It is dark, and it is a role that I really sink into. But that’s the work you dream of as an actor. I create playlists for myself. It’s a lot of depressing, dark music.

This season, the show deals with the themes of #MeToo. But the show actually finished filming before #MeToo ever trended on Twitter.

Sometimes I think [our showrunner] Melissa Rosenberg has a crystal ball. In season one, there was this scene where Kilgrave tells Jessica to smile. That came out around the same time as that video that went viral of the woman walking around New York City with all these men catcalling her and telling her to smile.

This season, we have a small storyline where [Jessica’s friend] Trish has to face a movie producer that took advantage of her when she was younger and has since taken of advantage of other young girls. It’s a very uncanny parallel to #MeToo.

These issues aren’t new, unfortunately. Melissa was just writing what we all experience as women. Maybe now that we’re talking about it, this shit won’t stand anymore.

Lots of shows depict rape and assault. Why do you think the way Jessica Jones deals with those issues resonates with people?

People are connecting with Jessica because she is outwardly expressing her anger about it. She’s pissed off. [Trish’s] story does not involve her, but she’s a victim of sexual assault herself. I think it triggers an anger that has been lying dormant. The fact that he’s hurting other women makes her completely flip out and punch a hole in a car.

Jessica Jones hired all female directors this season, which is rare for television. Why was that important for the show?

That’s the DNA of our show. The showrunner is a woman. Half our writers are woman. The star is a woman. Melissa is always trying to make sure that we’re bucking stereotypes, even the way that she creates people in the background.

She wanted to make sure that we were doing 50-50. They started interviewing people and realizing that there are a lot of women that would be a great fit. And then they just decided to do an all-female team. I feel so proud that our show did that. It’s proof that it’s really not that difficult to do.

Does it make a difference for you as an actor?

There was a real collaborative feel on set. Seeing all these badass women behind the camera is inspiring.

And when I have to do a sex scene, having that conversation with a woman is just so much easier. Like, “Okay you want to see this much of my butt? You want to put my arm here? Let’s do it.” It’s just a quicker, franker conversation when you can have it with another woman.

Wonder Woman premiered between seasons one and two of Jessica Jones. Since then, there’s been a push to bring more female superheroes to the screen. Has that lifted the burden off Jessica as the only female superhero with her own TV show?

Jessica doesn’t think of herself as a superhero. Her superpowers are a secondary thing. I sometimes even forget what we’re doing a superhero show. Her concerns are very real-world problems and trauma.

She’s a very different kind of character than Wonder Woman, but women can relate to both of them in totally different ways. That’s awesome. There is room to celebrate both as wildly different as they are.

God knows there are a million different types of male superheroes in movies and TV.

How is Jessica different from other superheroes in general?

The show is more adult, too. She doesn’t wear a costume. She wears jeans and boots and a leather jacket. She’s an alcoholic. She has sex. She hates herself. She has PTSD. She’s prickly and not likable all the time. She’s very vulnerable.

Jessica knocks back a lot of whiskey in the show. What are you drinking when Jessica takes shots?

It’s usually peppermint tea. We’ve perfected the look and the color. For me, because I consume mass amounts, I can’t be drinking Coca-Cola all the time.

Jessica drinks viciously because it takes a lot to get her drunk. It takes five times the amount for her to get drunk. That’s why she’s always throwing it back so violently—because it pisses her off that she can’t just get drink. 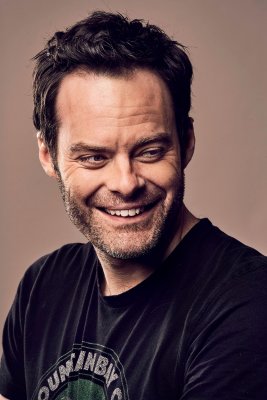 Bill Hader on Playing a Hit Man, Anxiety and Avoiding Social Media
Next Up: Editor's Pick