How Stephen Hawking Helped Redefine the Rules of Reality

Ideas
By Brian Greene
Greene is a professor of physics and mathematics at Columbia University, a cofounder of the World Science Festival and the author most recently of The Hidden Reality: Parallel Universes and the Deep Laws of the Cosmos.

During the fall of my sophomore year at Harvard, a group of my fellow physics majors were excitedly discussing a rumor they’d just heard: Stephen Hawking was coming to give the prestigious Loeb Lectures. I played along with their excitement, but truth be told, I didn’t know who Stephen Hawking was. This was the early 1980s, well before A Brief History of Time, so to all but the most physics-savvy of people, Hawking had yet to become Hawking. The rumor was true, and a few weeks later the physics-savvy crowd turned out in force, packing the largest hall to hear Hawking discuss relativity and the origin of the universe.

Although his movements had been reduced to flicking a finger or squinting an eye, Hawking could still speak — a soft, monotone murmur that was barely audible. One of Hawking’s graduate students, trained to decipher his speech, sat inches from the wheelchair, attentively listening and relaying Hawking’s remarks to an audience that hung on every word. The reduced pace allowed me to follow a lecture that otherwise would have left me baffled, making the experience all the more remarkable. I was riding to the edge of space and time on a mind soaring free of a body that had been mandated to sit as still as stone.

As the world would come to know, Hawking suffered from amyotrophic lateral sclerosis, a disease that ravages the neurons controlling voluntary muscle movement, but leaves cognitive functioning intact. By shifting from the tactile tools of a typical theoretical physicist — pen, paper, chalkboards, computers — to diagrams and imagery he could manipulate solely with the mind’s eye, Hawking was able to continue his research and, in time, see further than anyone previously had. Among much else, that vision would illuminate the darkness of black holes.

Hawking didn’t discover black holes. But he sparked a revolution, still ongoing, in our understanding of them. In the early decades of the 20th century, we learned from Einstein’s theory of gravity, known as the general theory of relativity, that if you cram enough matter into a small enough region, the gravitational pull will be so strong that nothing can escape its forceful grip. Included in that “nothing” is light, and so the gravity-infused mass will go dark — it will fade to black. In the early 1970s, Hawking updated this conclusion by including quantum mechanics, the hard-won mathematical description of the behavior of particles like electrons and photons, developed in the first half of the 20th century. What Hawking found was so surprising that at first even he didn’t believe it. Through quantum processes, particles can leak through the surface of a black hole, creating an outward streaming swarm causing a black hole to glow — or even explode. Black holes, in other words, are not fully black. They radiate. Although such “Hawking radiation” has yet to be observed (for typical black holes, the effect is minuscule) there is now universal consensus that Hawking’s analysis is correct.

The result transcends black holes. It reveals strange properties of space, time and gravity in a quantum universe that have thrilled, fascinated and frustrated physicists for more than 40 years. One stunning outgrowth of Hawking’s insight, at the forefront of current thinking, is that the three-dimensional reality we inhabit may be akin to a hologram — we may be a three-dimensional projection of comings and goings that take place on a thin two-dimensional surface that surrounds us. Called the holographic principle, it’s one of the strangest ideas of modern physics, and one that emerged from physicists carefully thinking about Hawking’s radiation and its implications for the information carried by anything that falls over a black hole’s edge. Many now believe that the holographic insight is essential to realizing Einstein’s dream of a unified theory of all of nature’s forces.

Some years back, Hawking was the honored guest at the World Science Festival’s annual gala in New York. As we accompanied Stephen through the throngs of invited guests and swarms of press and photographers — all pushing in, straining to catch a glimpse — it became beyond intense. For brief moments, it felt atavistic. Yet, Stephen seemed to take it all in stride. I remembering wondering: Is he off in another world, undertaking some mental calculation that lets him rise above the tumult? Is he parking his mind near the edge of a black hole, reducing the time he’ll experience before it’s safe to come back to Earth? I will never know. But as I think about it now, I like to imagine he was mulling over a remark he’d made some years earlier, in which he reflected on our bestial past and captured in the simplest and starkest terms what it means to be human: “We are just an advanced breed of monkeys on a minor planet of a very average star. But we can understand the Universe. That makes us something very special.” And how special for us to have been on this minor planet while this major mind rewrote the rules of reality. 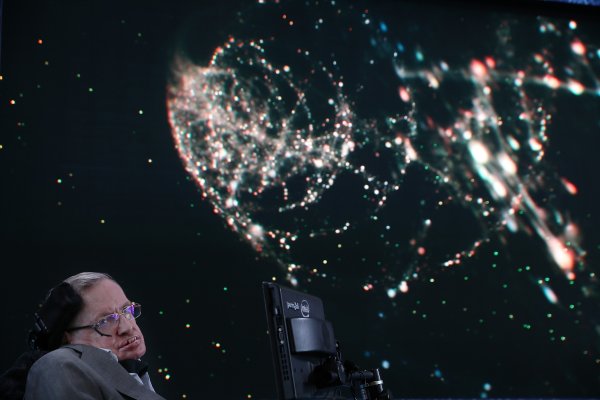 Remembering Stephen Hawking’s Greatest Scientific Accomplishment — and My Famous Bet Against Him
Next Up: Editor's Pick