Newly released surveillance footage from outside Marjory Stoneman Douglas High School depicts a school resource officer who has been criticized by President Trump as a “coward” for not entering the school during the shooting that left 17 people dead.

Scot Peterson — then a school resource officer from the Broward County Sheriff’s office — has faced scrutiny for how he acted as the shooting unfolded. Peterson resigned shortly after the shooting.

According to the timestamp on the 27-minute-long surveillance video, the footage begins at 2:22 p.m. local time on Feb. 14. That’s one minute after gunman Nikolas Cruz entered the high school’s Building 12 and began shooting.

The surveillance footage shows Peterson outside of a different school building at that time. In the video, he and another man approach a school door while appearing to talk on a radio, then begin to run in another direction. Seconds later, they are shown driving off in a golf cart.

Minutes later, from the perspective of a different camera, Peterson appears outside another building across a sidewalk from Building 12, which is out of view. Peterson has said he took up a “tactical position” there.

On Thursday, the Broward Sheriff’s Office criticized Peterson’s response to the shooting.

“The video speaks for itself. His actions were enough to warrant an internal affairs investigation, as requested by Sheriff Scott Israel on Feb. 21. After being suspended without pay, Peterson chose to resign and immediately retired rather than face possible termination,” the sheriff’s public information office said in a statement accompanying the video on Thursday. “In accordance with Florida law, we are prohibited from discussing any other details of the [internal affairs] investigation until the case has concluded.”

Last month, Israel accused Peterson of failing to do his job by not going inside the building where the shooting took place. “What I saw was a deputy arrive at the west side of building 12, take up a position, and he never went in,” Israel said at a Feb. 22 press conference, saying it made him “sick to my stomach.”

President Trump has since called Peterson a “coward” for not going inside.

But Peterson has defended himself against those accusations, saying he followed protocol because he believed, at the time, that the gunfire was coming from outside the school buildings. 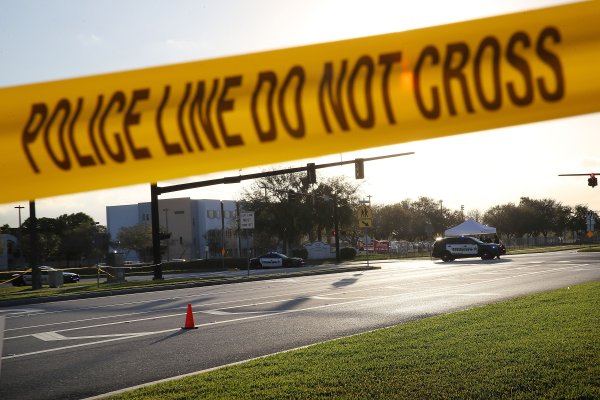 'They Are All Bleeding. They're Going to Die.' New 911 Calls Capture Fear as Parkland Shooting Unfolded
Next Up: Editor's Pick