Russia Is Now a Rogue State. We Must Treat It Like One

Russian President Vladimir Putin speaks during the congress of transport workers on March 5, 2018 in Moscow, Russia. Vladimir Putin is expected to be re-elected during the 2018 Presidential Elections planned on March,18.
Mikhail Svetlov—Getty Images
Ideas
By Tom Tugendhat
Tom Tugendhat is a Conservative member of the U.K. parliament and chairs the foreign affairs select committee

On Monday, British Prime Minister Theresa May confirmed what many already suspected: A Russian-made nerve agent was used to try to kill Sergei Skripal and his daughter Yulia in Salisbury, England. Given the nature of the weapon, May concluded, either the Russian government sanctioned the attack or it has lost control of its stock of this extraordinarily lethal substance. Moscow is still refusing to provide a straight answer.

A similar question was asked 12 years ago following the discovery that the volatile radioactive substance polonium 210 was used to murder another Russian, Alexander Litvinenko, in London. British forensic scientists were ultimately able to determine which Russian reactor the polonium had come from. The then-government’s reluctance to pursue the matter forcefully arose from a hope that relations with Russia might be repaired. This was forlorn and, with the benefit of hindsight, now looks naïve.

In Moscow, British inaction was read as acquiescence to an extraordinary and unprecedented violation of our own and international law. Two years later Russia invaded its southern neighbour, Georgia, again counting on Western passivity. That calculation proved correct. Since then, Russia has annexed Crimea, shot down a Malaysian Airlines flight killing everyone on board, invaded Ukraine, and kidnapped an Estonian official. Then in 2015, the Kremlin intervened in Syria to prop up the country’s beleaguered dictator, Bashar Assad. The West’s shameful failure to take action following Assad’s use of nerve agents to murder children in their homes was also noted in Moscow.

That pattern – action, denial, normalization, continuation – has led to the appalling case of the Skripals. The very existence – let alone the use – of the nerve agent used to try to kill them is a breach of the chemical weapons convention, to which Russia is a signatory. If the playground nearby had been in use this would unquestionably have seen British children injured or even killed. The attack is not just on the intended victims but on the British people.

As shocking as the Salisbury incident is and as revealing as it is of Russia’s growing disdain for international laws it is signed up to, it is only half the story. At the same time as employing covert violence, Russia has been actively trying to corrupt us.

The extent of Russian meddling in the 2016 presidential election in the United States and attempted interference in the French elections is gradually becoming clear. In the meantime, the Russian government, its propaganda outlet Russia Today and an army of online trolls deliberately spread what has been dubbed “fake news” but is really information warfare: lies designed to confuse and hide the truth. This exploits the basis of democracy and our greatest strength—free speech—to spread doubt. The Russian government’s aim in doing so is not to convince people that its version of events is correct. It is to bewilder and befuddle—bombarding people with conflicting theories, in order to divide opinion and ultimately create a climate of apathy—so that collectively we acquiesce to whatever Russia does next.

May’s decision to seek an urgent meeting of the U.N. Security Council and to expel 23 Russian diplomats – all of whom are apparently undeclared intelligence officers —has also left plenty of room to take further measures in due course.

We should use this opportunity now to speak the truth. By identifying where President Vladimir Putin, his family and henchmen have hidden the wealth they have stolen from the Russian people we can show them for what they are—the people who have betrayed their country.

In the United Kingdom, a sense that we depend too much on Russian energy and money has also encouraged inertia for too long. This is wrong and our government must urgently review all the facets of our relationship with Moscow. Russia’s economy is failing and its global standing is waning. We must be strong in resisting the violent outpourings of a crumbling regime. The evidence makes it increasingly clear that Russia is an aggressive, rogue state. 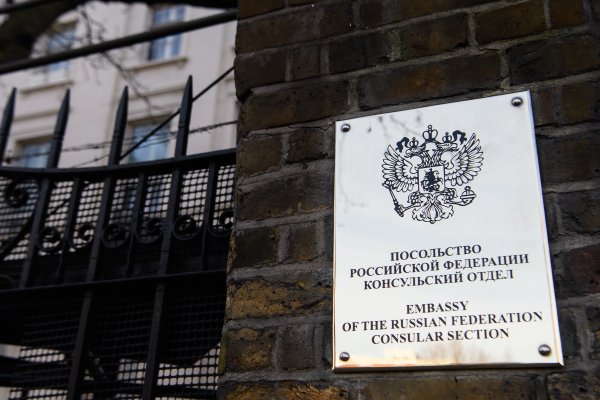 The Skripal Attack Is the U.K.'s Chance to Show Strength Against Russia
Next Up: Editor's Pick