'They Are Lifting Us Up.' How Parkland Students Are Using Their Moment to Help Minority Anti-Violence Groups

The Peace Warriors, a group of predominantly black high school students from Chicago, have been fighting gun violence for 10 years without garnering much attention from the outside world. The students from Parkland, Fla. brought the issue to national prominence in a matter of days.

So when the Chicago youth group from North Lawndale College Prep High School met the Marjory Stoneman Douglas High School teens in Florida last month to discuss their common cause, many in the room had the same unspoken thought. Parkland, a wealthy suburb of Broward County, had been named one of the safest communities in Florida before a gunman killed 17 students and faculty in a mass shooting last month — while more than 3,400 people were shot in Chicago in 2017 alone, according to police.

“It was like one of those elephants in the room that no one wanted to talk about,” said Gerald Smith, 47, who advises the Peace Warriors, a group that teaches students how to resolve conflicts peacefully through Dr. Martin Luther King, Jr.’s teachings of nonviolence.

Two hours into the meeting, Parkland student Sarah Chadwick stopped ignoring what they all felt was obvious. “I acknowledge my white privilege,” she said. It was a breakthrough for both groups of teens, and the admission rendered most of the Chicago visitors emotional and speechless.

“It was like the room just went silent,” Smith said. “I got choked up. When that came to light, there were tears. That was kind of an olive branch moment. That was just profound.”

The meeting with the Peace Warriors is one of the ways that Parkland’s student activists say they are are working to use their influence to advance minority groups that have been working for years without national attention. “I said it because it’s true. White privilege does exist and a lot of us have it,” Chadwick told TIME in a recent interview. “If we could use our white privilege to amplify the voices of minorities, then we’re going to use it. The more we ignore it, the worse it gets.”

The Peace Warriors had reached out to the Parkland students, after receiving a nudge and sponsorship from Barack Obama’s former Education Secretary Arne Duncan, who works with the Chicago students. “We were wondering how could we sort of feed off of their energy,” said Arieyanna Williams, a 17-year-old Peace Warriors member. The Parkland students immediately accepted the request and invited them to Florida to discuss coordinating their efforts.

“We found our voice in Parkland,” Arieyanna added. “We felt like we weren’t alone in this situation and we finally can use our voices on a bigger scale.”

In the two years Arieyanna has been a Peace Warrior, she said she struggled to find ways to stop gun violence in her hometown, which this year alone has so far seen more than 300 shootings and at least 90 murders, according to the Chicago Police Department. Arieyanna said the Parkland students taught her to erase her self-doubt and stop accepting that gun violence is normal.

“We just felt there wouldn’t be a way to stop it. We grew up into that and we evolved around that,” the Chicago teen said. “Now, I see the world through a different way.”

In return, the Chicago students taught their Parkland counterparts how to believe in achieving peace through nonviolence, as King had preached. “I feel like what we’re trying to do is take Martin Luther King Jr. as an example,” Jaclyn Corin said during an interview for TIME’s latest cover story. “We are seeking peace through a nonviolent manner, just as he was. We learned his peace principles. We know exactly how he was successful and we’re trying to do exactly what he did so we can be successful also.”

Senior Emma González added: “We learned them from the kids from Chicago when they came to visit.”

The Parkland and Chicago teens needed to first discuss their differences before they were able to move forward and build a strong friendship, said D’Angelo McDade, a senior Peace Warrior. The students soon realized they had a lot more in common.

“Parkland is one of the safest cities in Florida,” Arieyanna, one of the Peace Warriors, said. “It’s a different moment for them to realize that just because they had that title that it wouldn’t happen to them. The students in Chicago see it every day. The difference is the amount of violence going on, the similarity is the hurt. They thought for so long they’d never see the violence and we thought for so long that we couldn’t see it stopped.”

“We’re fighting for the same thing,” she added. “They are lifting us up.”

The Parkland students have also been working with the Dream Defenders, a Florida-based civil rights group founded in 2012 after Trayvon Martin’s shooting death, to ensure their movement is inclusive of the black and Hispanic advocates in under-resourced communities whose longtime campaigns against gun violence have received less recognition.

With additional reporting by Charlotte Alter 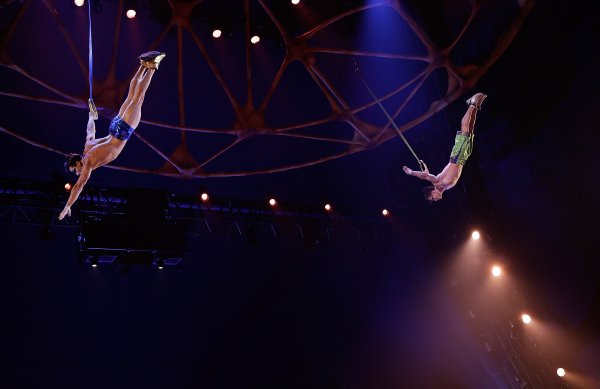