'Some People Have Forgotten, but We’re Still Here.' What the Student Walkout Looked Like in Parkland

Thousands of students at Marjory Stoneman Douglas High School somberly paid tribute Wednesday to the 17 students and teachers murdered at their school exactly one month ago by walking out of their classrooms as part of a nationwide demonstration and swarming the city’s memorial site in near silence.

At about 10 a.m., most of the roughly 3,000 students at the Parkland, Fla. school converged on their campus football field, where the school’s drama students performed an original song about resilience, moving some to tears. The walkout in Parkland was just one of thousands happening at schools across the country. Tens of thousands of students have marched out of their schools en masse to demand gun reforms and safer schools.

“It’s been a month and maybe some people have forgotten, but we’re still here,” senior Taylor Morales, who participated in the Parkland walkout, told TIME on Wednesday. “We’re still protesting. We’re still working hard. We’re still remembering the victims. We’re still going to make sure change is going to happen.”

After the Marjory Stoneman Douglas students commemorated the fallen victims on the football field, some students returned to their classrooms, as the administration had initially planned. But dozens of other students decided to continue their demonstrations by marching to Pine Trails Park, where 17 crosses have been planted in the ground for each victim.

“People started walking back to their classes, but we were trying to find a way out,” said Morales, 18, a member of the school’s color guard.

Morales said security guards eventually allowed about 50 students to leave campus, but the students were told they wouldn’t be able to return for the rest of the day if they left.

As the smaller group marched toward the nearby park, they chanted, “MSD! MSD!” as passing cars honked and supporters waved motivational signs as they walked by. When the students made it to the memorial site, they swarmed every single cross. “They’re all surrounding each person’s cross with their names and all the flowers and all the stuffed animals,” Morales said. “There are circles all around them.”

“You see people leaning on each other. There’s a huge sense of community right now,” she added. “It’s kind of sad, it’s mournful, but it’s really positive.”

At around 11 a.m., the students at the park started sitting down and eating lunch as they waited to have a moment of silence for the victims. “Everyone is just sitting around the crosses, talking and eating,” Morales said, “like the deceased are still here and having a picnic with us.”

Meanwhile, in other pockets across the country, students marched in droves and chanted in protest. Near the White House in Washington, D.C., they screamed for change to gun policies. Many schools held moments of silences to commemorate the lives lost in Parkland last month.

“It makes us feel a lot stronger and that we can actually make a difference,” Morales said. “It’s showing that we’re not going to let these victims die in vain.” 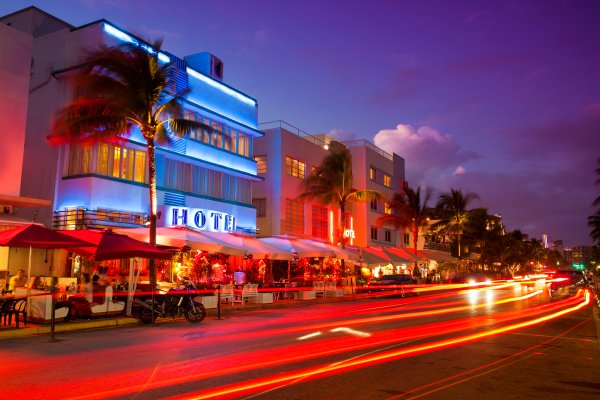