Celebrities From All Realms Are Mourning Stephen Hawking's Death

Renowned theoretical physicist Stephen Hawking passed away on Wednesday at his home in Cambridge, England at the age of 76. Hawking was known as one of the most brilliant minds of his time, with his scientific work making strides when it came to space, time, and astrophysics, despite his body being paralyzed by ALS for most of his life. Hawking was also acclaimed during his lifetime in not only the world of science, but in culture and entertainment, with his life and and likeness appearing on both television and film.

Following his passing, celebrities from all realms paid tribute to this extraordinary man.

Eddie Redmayne, who notably portrayed Hawking in the 2014 movie, The Theory of Everything, released an emotional statement to Deadline following Hawking’s passing: “We have lost a truly beautiful mind, an astonishing scientist and the funniest man I have ever had the pleasure to meet. My love and thoughts are with his extraordinary family.”

While Nancy Sinatra used one of Hawking’s own quotes to pay tribute to him.

The cast of The Big Bang Theory fondly remembered their beloved guest star.

And Star Trek: Next Generation’s Brent Spiner also expressed his condolences while remembering the time they spent together.

John Oliver paid his respects to the great scientist. 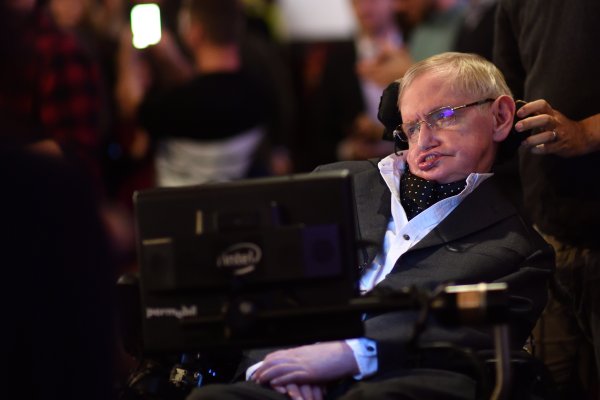 Remembering Stephen Hawking's Other Stroke of Genius as The Simpsons' 'Most Intelligent Guest Star'
Next Up: Editor's Pick