The Skripal Attack Is the U.K.'s Chance to Show Strength Against Russia

There can be little doubt that the Russian government is behind the attempted assassination of double agent Sergei Skripal and his daughter. While there were the typical official denials, the Russian state has ways of communicating its innocence to foreign governments. In this case, it has not done so.

The use of a nerve agent fits a pattern established by the murder of Alexander Litvinenko with polonium in 2006. This was not a McMafia-style operation commissioned by “rogue elements.” If they were to blame, Moscow would be even more alarmed than London. Since the chaos of the 1990s, Putin has restored the state’s traditional prerogatives in foreign covert operations, as well as the president’s prerogatives within it. This was graphically demonstrated in Crimea in early 2014 with the deployment of “little green men.”

But what could be the motive? The Russians think strategically and will have planned this operation carefully in terms of both its execution and impact. What it says to Russians living in the U.K. or those thinking of leaving the country is: disloyalty is always punishable, you will never be free of us and you will never be safe, wherever you live. Singling out the reclusive 66-year old Skripal, eight years after he came to the U.K. and had run out of secrets to tell, simply underlines the point: you do not have to be an arch enemy of the Putin system to be in potential danger, and your family may also be a target.

What it says to the British government led by Theresa May is: we believe you are weak, and we have no respect for you. In recent years, successive British governments have repeatedly communicated weakness to Russia without any intention of doing so.

First, even before the suspicious “suicide” of dissident oligarch Boris Berezovsky in 2013, the U.K. authorities had been singularly lackluster in prosecuting a macabre string of suspect deaths of Russian exiles on British soil. Until 2014, the government resisted a public inquiry into the death of Alexander Litvinenko, signaling that it was disinclined to name and shame Russia for fear of harming attempts to rebuild ties.

Second, Russia viewed the Strategic Defense and Security Review (SDSR) of 2010 as an abdication of Britain’s great power role. The winding down of a fair portion of the U.K.’s maritime reconnaissance and warfare capability in northern waters was regarded with incredulity. The SDSR’s 2015 successor has repaired much of the damage to U.K. defense capacities, but this scarcely has registered in Moscow.

Third, David Cameron’s government chose to absent itself from the Russia–Ukraine “Minsk process,” leaving the running to Paris and Berlin. Given the U.K.’s prominent role in securing the rights and assurances that underpinned Ukraine’s independence and territorial integrity (including its signature on the 1994 Budapest Memorandum), London effectively communicated to Moscow that Ukraine had become a lesser priority and that Britain had better things to do. Although the U.K.’s vigorous defence advisory effort has earned plaudits in Kiev, Russia no longer considers Britain to be a serious player in Ukraine.

Fourth, there is Brexit, which many of its supporters believe will strengthen Britain’s global influence. Whatever the merits of that claim, the Russians view Brexit as a case of the U.K. cutting off its nose to spite its face. From the earliest days of the Cold War, the USSR and its Russian successor viewed Britain as Washington’s number one proxy in Europe. From Moscow’s perspective, the U.K.’s position at the EU top table enhanced U.S. and British influence simultaneously. That advantage has been thrown away.

For these reasons, the Skripal affair is not only a reflection of perceived weakness. It is also a test. If the U.K chooses to act toughly, will its allies support it or simply send their best wishes? This latest example of Russian “reconnaissance by combat” puts Britain into a bind.

Fortunately, whatever the allied response, the U.K. is the repository of a national asset of very high value to Russia: the City of London. For many years, it has effectively allowed key Russian stakeholders to use the services of the City – in particular, the London Stock Exchange, as well as the high-end property market – for purposes legitimate, illegitimate and even illegal.

It is time to transform them from a source of advantage to Russia to a strategic asset for the U.K. Doing so will require proper analysis, coordination (including the security services, the Treasury and the Serious Fraud Office) and dedicated resources. Asset freezes, money laundering investigations and selective cancellation of visas for individuals and their families who are either part of the regime or support it will cause real pain in Moscow. Impulsive and symbolic measures will not do the same.

Leon Trotsky once said, “You might not be interested in war, but war is interested in you.” Today’s Russian leadership, political and military, believes it is at war with the West. It is not a war dominated by artillery and tanks, but by finance and social media, with huge opportunities for covert action from disinformation to assassination. As Russia’s Ministry of Defense stated in 2011, to prevail in these new conditions requires “destabilizing the society and state, and forcing the state to make decisions in the interests of the opposing party.” That is the test the U.K. faces.

This piece was originally published by Chatham House, the London-based think-tank for international affairs. 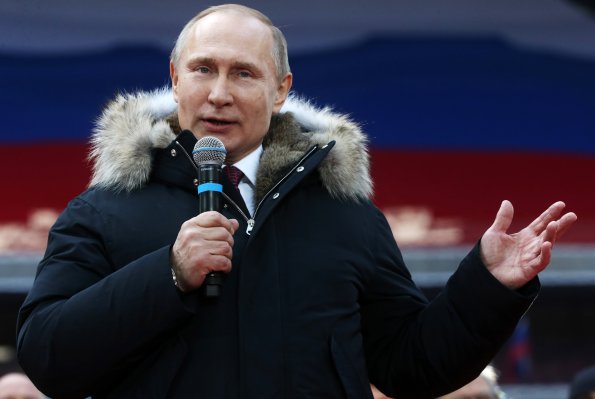 What to Know About Russia's Presidential Election
Next Up: Editor's Pick