Half of All Wildlife Could Disappear from the Amazon, Galapagos and Madagascar Due to Climate Change

As much as half of wildlife and 60% of plants in the world’s richest forests could be at risk of extinction in the next century if stronger efforts aren’t taken to combat climate change, according to a new report on the risks of rising global temperatures.

The landmark study was conducted by the World Wildlife Fund, University of East Anglia, and the James Cook University, and published on Tuesday in the journal Climatic Change. It warns that rising temperatures and associated phenomena, including extreme storms, erratic rainfall patterns, and prolonged droughts, could have disastrous effects on some of the world’s most biodiverse areas, including the Amazon river basin, Galapagos islands, southwestern Australia, and coasts of Europe and the Caribbean.

“Hotter days, longer periods of drought, and more intense storms are becoming the new normal, and species around the world are already feeling the effects,” said Nikhil Advani, lead climate specialist at WWF.

The study examined the impact of climate change on nearly 80,000 species of plants and animals species in 35 of the world’s most diverse areas. They tested for three scenarios: a 2°C rise in global temperatures, the upper threshold of the Paris Climate Agreement, a 3.2°C increase that the U.N. warns is now the estimated forecast for the end of the century, and a 4.5°C increase, if carbon emissions remain unchanged from current rates.

The study found that if global temperatures rose by 3.2°C, 60% of plant life and 50% of wildlife in the Amazon would be at risk. But that risk increases dramatically at if temperatures rise by 4.5°C, and would be catastrophic for the flora and fauna in particularly vulnerable areas such as the Miombo Woodlands in southern Africa, where the study projects the loss of 90% of amphibians and 80% or more of mammal, plant, and bird life.

The study’s authors propose two methods of reducing this ecological toll. One is dispersal, or allowing species to migrate to new, less vulnerable territory, which could decrease extinction by 20-25% if global temperature increases are kept to 2°C. The other, and more effective method, according to the study, is mitigation, or curtailing greenhouse gas emissions more ambitiously to minimize temperature increase.

“Mitigation really matters,” the study’s authors write, advocating for temperatures increases to be kept to 1.5°C if possible. But even “a best-case mitigation scenario” would see many parts of the world rendered uninhabitable to numerous species, the report found. “The most important thing the world can do is to keep global temperature rises to a minimum by doing everything possible to reduce the greenhouse gases in the atmosphere.” 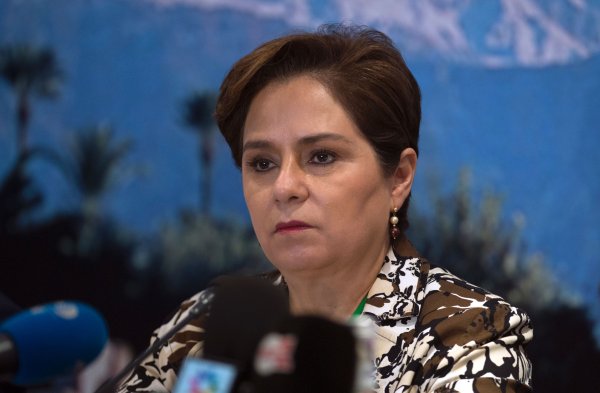 U.N. Climate Change Chief Wants Donald Trump Back in the Paris Agreement
Next Up: Editor's Pick