In a farewell speech, Secretary of State Rex Tillerson thanked career diplomats, servicemembers and the American people, but did not thank President Donald Trump, who fired him hours earlier via tweet.

Taking the podium at the State Department Tuesday afternoon, Tillerson said he would delegate “all responsibilities of the office of the secretary” to Deputy Secretary of State John Sullivan at the end of the day, but that he will stay on until March 31, remaining to “address a few administrative matters” related to his departure and transition.

“I close by thanking all for the privilege of serving beside you for the last 14 months,” he said. “Importantly to the 300 plus million Americans, thank you for your devotion to a free and open society, to acts of kindness toward one another, to honesty, and the quiet hard work that you do every day to support this government with your tax dollars.”

Trump tweeted just before 9 a.m. that he was firing Tillerson and replacing him with CIA Director Mike Pompeo. Tillerson was reportedly not given specific advance notice of his termination, and he said that he received a call from the president around noon, three hours after the tweet.

When a State Department aide put out a statement that Tillerson was “unaware of the reason” for his firing and learned of it when the rest of the world did on Twitter, the White House immediately fired that aide.

It was a chaotic morning that followed months of tension between the two men. Trump also told reporters that “we were not really thinking the same” in remarks to press Tuesday morning.

Tillerson cited the “maximum pressure campaign” against North Korea as his primary accomplishment at the State Department, but he did not mention Trump’s recent decision to accept a meeting with North Korean Leader Kim Jong Un. (Trump said earlier in the day that he didn’t consult Tillerson on that major foreign policy move. “I really didn’t discuss it very much with him, honestly,” he said. “I made that decision by myself.”)

In likely his final address as Secretary of State, Tillerson praised his working relationship with Defense Secretary James Mattis and highlighted challenges facing the State Department, including achieving peace in Syria, “establish[ing] a clear view” of the United States’ relationship with China and “respond[ing] to the troubling behavior and actions on the part of the Russian government.”

But now out of a job, the former ExxonMobil chief said he’s leaving government altogether.

“I’ll now return to private life,” he said, “as a private citizen, as a proud American — proud of the opportunity I’ve had to serve my country.” 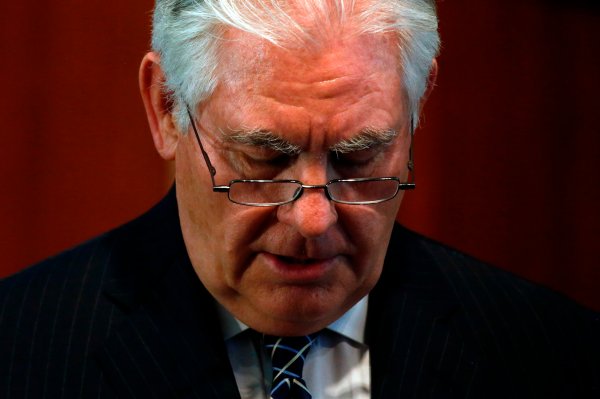 Tillerson Can Keep Tax Break After Leaving State Job After a Year
Next Up: Editor's Pick