Why Donald Trump Blinked on Guns

Less than two weeks after Donald Trump chided Republican lawmakers for fearing the National Rifle Association and not being ambitious enough in their work to curb gun violence, the President seems to have backed down too.

The pipe dream of passing sweeping gun legislation met its end Sunday with the White House release of a plan that walks back Trump’s support for raising the age to buy some weapons, from 18 to 21, and shelves calls for comprehensive background checks. “Not much political support (to put it mildly)” Trump tweeted Monday.

The climbdown was striking. Just 11 days ago, Trump scolded Sen. Pat Toomey, a Pennsylvania Republican, for not including the age hike in a gun bill. “You know why? Because you’re afraid of the NRA,” Trump scolded Toomey, who braved political peril by introducing background-check legislation, as the press looked on.

But it’s no surprise that Trump’s rhetoric gave way to the tricky realities of gun politics. As the Feb. 14 mass shooting in Parkland, Fla., faded from headlines, the White House realized the president perhaps overstepped on what he was willing to do — and whom he was willing to anger.

While public polls show overwhelming support for action on guns, private polls conducted for Republicans show Trump’s strongest supporters have little interest in that. Trump, who runs the government as if it were a proxy for only his most fervent fans, seemed to go wobbly on the issue. A White House official said Trump still wanted stronger background checks but recognized the risks of alienating his supporters.

A Republican who speaks with senior White House officials regularly says this is what many aides were looking to avoid. The problem, this Republican says, is that Trump rushed into the debate with gut instincts but little grasp of gun policy. This was, after all, a man who wrote in a pre-campaign book that he favored a ban on assault weapons—and then won the White House with record support from the NRA.

The NRA and like-minded gun-rights groups were willing to let the gun debate play out, knowing inertia was on their side. The groups have long opposed any efforts to restrict Second Amendment rights, and in the past they have threatened lawmakers who stepped out of line. But this time, gun-rights groups took a different approach.

NRA leaders put up a pro forma fight. But as TIME has reported, behind the scenes the NRA signaled to allies that a conversation about guns would not be seen as a betrayal. The reality is, it could be helpful. Fear of gun restrictions is good for business, and struggling firearm makers could use a jolt in sales. At the same time, the NRA told its members that they were under threat from liberals, the media and those who make it harder to buy guns — a common victimhood tactic following these types of headlines. It was good for membership sign-ups.

Trump seemed to be playing his part. In the days after the mass shooting that killed 17 at Marjory Stoneman Douglas High School, the President demanded ambitious plans to tackle gun violence. Over the objection of some of his advisers, Trump said he wanted stronger background checks before anyone could buy guns and told Attorney General Jeff Sessions to start work on banning bump stocks, which allow semi-automatic weapons to function like automatic ones.

That wasn’t all. Trump said he’d rather confiscate weapons from someone suspected of mental illness first and deal with due process later. He pushed the authors of previous gun legislation to go further than before and promised students who visited the White House that he would campaign for meaningful changes.

Then Trump began to backpedal. He hosted NRA executives for a weekend luncheon at the White House and an Oval Office meeting. After that meeting, the NRA’s chief lobbyist announced Trump had abandoned his most aggressive plans on guns.

By Monday, the talk was about studying the issue, not taking action. “Everything is on the table,” Education Secretary Betsy DeVos told NBC News’ Today Show on Monday. In other words, nothing was sacrosanct.

Democrats were, of course, frustrated. “President Trump has completely caved to the gun lobby,” said Sen. Dianne Feinstein of California. “To no one’s surprise, the President’s words of support for stronger gun safety laws proved to be hollow.”

The White House said the shift merely reflected political realities. “He can’t make them happen with a broad stroke of the pen,” White House press secretary Sarah Huckabee Sanders told reporters on Monday. She blamed Barack Obama’s administration for not dealing with guns when it controlled the House, the Senate and the White House from 2009 to 2011—a dynamic the GOP now enjoys. (The gun debate didn’t peak until after the Newtown, Conn., school shooting in December 2012.)

“You just can’t decide you want laws to pass and it happens,” Sanders said. 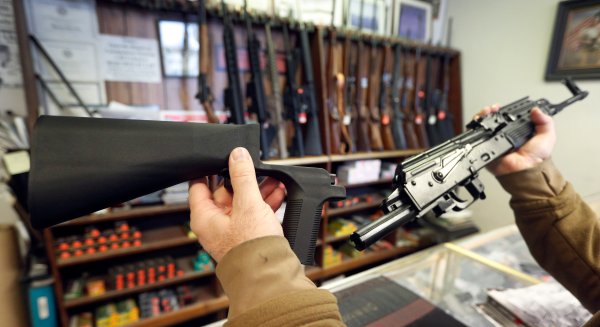