On Tuesday, Pennsylvania will hold a special election to fill the seat left vacant by Republican Rep. Tim Murphy, who resigned amid a sex scandal last fall. Like many special elections, the race is being closely monitored for clues about what it could mean for the upcoming midterm elections. Though the District has been Republican-held since 2003, the Democrat in the race has gained traction.

Here’s what to know before voters head to the polls on March 13th.

Who is running in the Pennsylvania special election?

The race to replace Murphy, who resigned after allegedly suggesting mistress should have an abortion, will be between Democrat Conor Lamb and Republican Rick Saccone.

Saccone, an Air Force veteran, has said he was “Trump before Trump was Trump.” But the conservative is no political outsider. He has served in the state legislature since 2011 and served as a diplomatic representative in North Korea under President George W. Bush. The Republican is a strong supporter of President Donald Trump, who stumped for him last weekend. Vice President Mike Pence has also campaigned for him in the state.

Lamb, a former Marine and federal prosecutor, is a moderate Democrat. Though he’s running primarily on issues including labor and fighting the opioid epidemic, he’s been pressed about his stance on abortion. As a Catholic, Lamb has said he opposes abortion personally throughout the campaign, though he is not suggesting he would vote for anti-abortion legislation. Lamb said he would not describe himself as “pro-life” because he believes the term is political. “It’s not one that you learn in Catholic school or anywhere else in the church,” he told the Weekly Standard. Former Vice President Joe Biden campaigned for him in early March.

Where is the 18th congressional district?

Touting his own record in Pennsylvania’s 18th district, where the election is being held, during a rally on Saturday Trump said Saccone “should win easily.” In a way, he’s right. The district, home to parts of Allegheny, Greene, Washington and Westmoreland counties in southwestern part of the state, is Trump country. During the 2016 presidential election he won the district by 20 points. It’s about 93% white and only about 36.5% of the population graduated from college.

What do the Saccone-Lamb polls show?

Despite those demographics, polling from the race reveals that the contest has tightened over the past few weeks. The race has been labeled a toss-up by national watchers. In early January, Saccone led polling by 12-points, according to a RealClear Politics roundup. By early March, an Emerson College poll had Lamb up by three points while a Gravis Marketing poll had Saccone up by the same amount.

The latest poll before the election, released by Monmouth University, showed Lamb having slim lead over Saccone, even if turnout on Tuesday is relatively low. These results came despite Trump’s recent announcement on steel and aluminum tariffs, which many perceived as an effort to please steel-working constituents like those who reside in the 18th district.

“This district has voted overwhelmingly Republican in recent elections, but a large number of these voters have blue-collar Democratic roots. Lamb seems to have connected with them,” director of the Monmouth University Political Institute, Patrick Murray said in a release.

Who is raising more money in the special election?

Lamb raised much more money than his Republican counterpart in the Pennsylvania race. The Democrat raked in over $3.3 million for the special election, while Saccone brought in about $703,000, according to federal filings. According to Politico, national groups have stepped in to fill the gaps for Saccone. An analysis by NBC News found that both parties have spent almost $12 million on television and radio ads for this election. 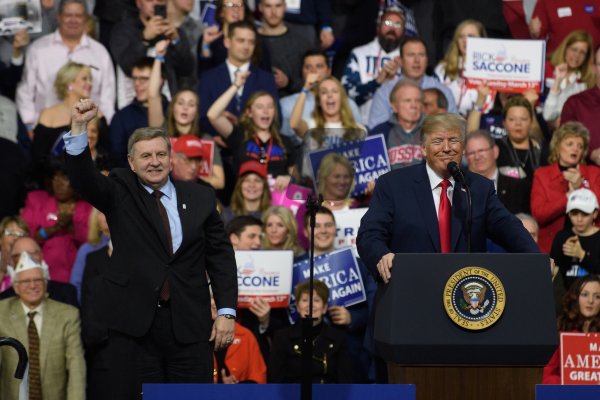