A dozen international coffee experts shuffle around a long wooden table, pausing at each steaming cup, head dipping, sniffing deeply, and shuffling on once more. Then the raucous slurping begins. In the wings hangs Yang Fan, the coffee farmer, watching the judges circle intently, awaiting a verdict on her latest crop of beans.

“This is the most international farmer coffee cupping we’ve ever had,” says Samuel Gurel, CEO of Torch Coffee roasters in the southwestern Chinese town of Pu’er, Yunnan province, referring to the weekly coffee grading process he hosts for local farmers.

It is a cosmopolitan gathering — joined by industry aficionados hailing from Thailand, Guatemala, India, Russia, Vietnam, Laos, the Philippines, Kenya and more nations besides. They came together to judge the first ever Pu’er International Specialty Coffee Expo, which ran from Jan. 28-31 and drew more than a thousand attendees. The event spotlights China’s burgeoning repute as a top coffee producer in the spiritual home of tea — an industry that is swelling even as economic pressures bite.

“Yunnan coffees are very elegant, the acidity is clean, and the post-harvest processing gives special flavors,” says Srikanth Rao, a visiting expert from Bayar’s Coffee gourmet roasters in Bangalore, India. “Some are buttery and with the flavor of strawberries.”

Still, Pu’er remains synonymous with tea. This bustling town surrounded by undulating green hills scored with tea plantations is just a stone’s throw from the border with Laos, and produces an eponymous variety of tea that is considered one of China’s most refined.

But the temperate climate of Pu’er is also perfect for growing arabica coffee. Yunnan accounts for 95% of China’s coffee harvest, with half coming from the mist-shrouded landscape around Pu’er. As China’s fast-living millennials move away from traditional tea in favor of the invigorating jolt of coffee, Pu’er’s farmers are catering to the demand. Today, China is the 13th biggest coffee producer in the world — rising from zero output three decades ago to 110,000 tons annually today.

“I used to grow tangerines but a disease harmed my crop,” says local farmer Huang Dabao, 51. “So I switched to coffee as there’s no major disease and the yield is very stable.”

And gaining serious acclaim. In April, China will be showcased as the portrait country of origin in Seattle’s annual Specialty Coffee Expo. It follows on the heels of Starbucks launching its first single-origin Yunnan coffee last year following four years of partnership with Yunnan farmers. In November, Starbucks also opened only its second Reserve Roastery anywhere in the world in China’s freewheeling megacity of Shanghai.

“Coffee has huge potential in China,” says Liu Ying, who swapped her life working in private equity investment in Beijing to grow coffee in Pu’er five years ago. “The younger generation prefer to drink coffee in their offices much more than tea.”

In fact, the story of coffee in China is a century old, with the bitter alien brew first introduced by French missionaries drifting over the border from Myanmar around the early 20th century, chiefly for personal consumption. But coffee’s commercial success in China began exactly 30 years ago and owes much to a familiar name: Nestlé.

In 1988, the Chinese government asked the Swiss-headquartered multinational — the world’s largest food and beverage company — to help poverty alleviation efforts by cultivating coffee in far-flung rural areas, partnering with the United Nations Development Program and the World Bank. By 1994, the first commercial plots took off and Nestlé has worked closely with farmers since that time, distributing generic material, offering practical advice and instilling codes of social, economic and environmental responsibility.

“There has been a huge transformation,” says Wouter de Smet, who has spent ten years helping farmers in Pu’er for Nestlé. “I visited all of the coffee areas, focused a lot on the village communities to make sure they could produce quality coffee and sell it directly to us.”

Today, farmers from 1,448 smallholdings, including representatives of 25 ethnic minority groups such as the Lahu and Wa, bring their crops to Nestlé’s spanking new Pu’er headquarters. A sample from every 70kg bag that arrives is logged and tasted by resident experts. Coffee that meets the grade is purchased according to international commodity prices set by the New York Stock Exchange, which farmers can monitor via smartphone, cutting out greedy middle-men and ensuring transparency.

But transparency doesn’t much help when global coffee prices are at record lows. At Nestlé’s cavernous warehouse, only one truck was unloading beans when TIME visited, a testament to prices wallowing at 14 rmb ($2.20) per kilo from highs of 40 rmb ($6.30) just a few years ago. With production cost alone around 17-19 rmb, most farmers are staying away until the price rises — or so they hope.

“Some days we have nothing and then the next day we can have 300 tons because the price of coffee in New York has risen,” says de Smet. Uncertainty doesn’t bode well for local farmers, however, and many are now turning away from commercial coffee to specialty varieties that can fetch up to 50 rmb ($7.90) per kilo.

“At current coffee prices, I can’t even feed my family,” says the farmer Yang. “My only way out is to produce specialty coffee, to make the best coffee beans.”

Read more: Always Stay Professional.’ Inside China’s Booming Butler Schools, Nothing But the Best Will Do

To do that, cherries from the same trees are picked and processed in bespoke ways to create distinct flavors and aromas. The upside is much higher, more stable prices compared to the global fluctuations of commercial coffee; the risk is bumped up production costs and the greater care required to make the grade.

“Right now with the coffee prices at 10 year lows, it’s not sustainable, which on one hand is horrible for coffee farmers,” says Gurel. “On the other hand, these challenges are what spur innovation.”

That means letting beans dry in their cherries, thus imparting a wild, fruity flavor via environmental fermentation. Or allowing them to “honey” in their sugary inner mucilage layer, which adds a subtle sweetness.

“Post-harvest processing is the most effective and fastest way to impact coffee quality and so also price,” says Torch business director Marty Pollack, who is about to open a new school in Saudi Arabia.

Back in the cupping room, Yang waits to hear the experts’ verdict on whether all that extra effort was worthwhile.

“If I told you this was Colombian or Panama coffee nobody would argue me with,” says Gurel, as Yang breaks into a huge grin. “It’s a great example of how Chinese coffee is evolving.” 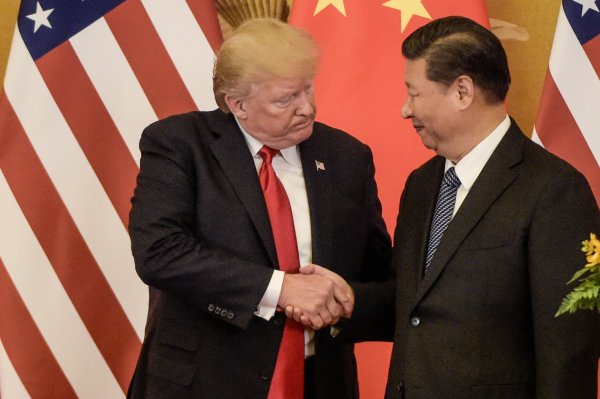 China Hits Back at Trump's Tariffs
Next Up: Editor's Pick