After Hong Kong’s pro-democracy camp failed to win back all four seats in a crucial by-election Sunday, activists say they fear China’s freest city could effectively be governed by a rubber-stamping body for Beijing.

Pro-democracy candidates won two of the seats up for grabs, but ceded the other two to pro-Beijing rivals, according to final results released Monday. The four seats were left vacant after six legislators were ousted at Beijing’s request in 2016 and 2017 following political statements made during the oath-taking ceremony. Their elimination severed the pro-democracy bloc’s veto power over legislative amendments.

Beijing has responded to the rise of Hong Kong’s young political hopefuls in the wake of 2014’s massive pro-democracy protests, known as the Umbrella Movement, by invalidating their candidacy.

Prominent activist and former student protest leader Agnes Chow was not even allowed on the by-election ballot due to Beijing’s dislike of her party Demosistō’s political views, which include calling for Hong Kong’s right to self-determination.

Democracy activists say these disqualifications have left voters disillusioned and raised concerns over the extent of Beijing’s encroachment on the semi-autonomous territory’s sovereignty. Since returning from British rule to China in 1997, Hong Kong has enjoyed significant liberties under a governance agreement known as “one country, two systems,” but some say the arrangement is eroding as China’s Communist Party seeks to thwart political opposition.

“People are very dissatisfied with Beijing and are also worried that [Hong Kong’s] Legislative Council will no longer be able to properly fulfill its role,” says 21-year-old democracy activist Joshua Wong, a leading figure of the Umbrella Movement and secretary-general of Demosistō.

Half of the semi-democratic Legislative Council is elected by trade-based interest groups called functional constituencies, while the other half is directly elected. But Wong said this election process is increasingly being “co-opted” by Beijing.

He attributed the by-election’s low voter turnout — just 43% of the eligible 2.1 million cast ballots — to “hesitancy” following the disqualifications.

Suzanne Pepper, a Hong Kong-based writer and academic, says that while she has not seen a breakdown of the vote, she suspects younger, pro-democracy voters did not cast ballots “because they feel their dream of building a democratic system within the Chinese state is dead.”

“They have concluded that any candidate who shares that dream, as they define it, will be [disqualified] either as a candidate or afterward, as a Legislative Councilor. So they must feel not indifference but a sense of futility and defeat,” she says.

Au Nok-hin, the democracy activist who stepped in for Chow and was elected in Hong Kong Island, says his win is “not something to be happy about.”

“Our goal was to win back the four seats won in the Legislative Council in 2016. We should remember that it was unnecessary to have these by-elections,” he says.

Before the polls, the pro-democracy camp had referred to the election as a referendum on democracy in Hong Kong, urging voters to help send a message to Beijing.

“If that’s the case, they lost the referendum since anything short of retaining all four of their seats is a loss,” says Ngok Ma, an associate professor of government and public administration at the Chinese University of Hong Kong.

The message sent instead, he adds, is that “China is taking control and there is no use resisting.” 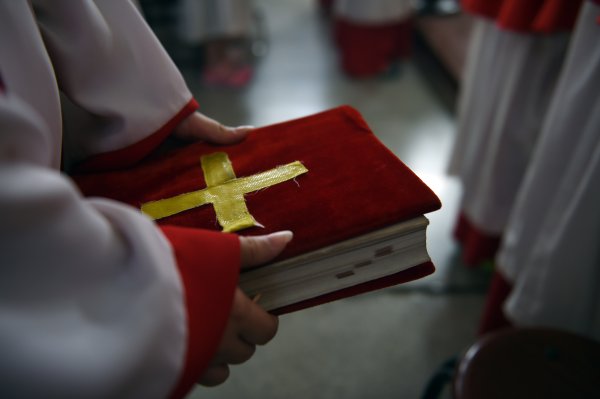 Hong Kong's 'Guerrilla' Pastors Are Being Targeted by China
Next Up: Editor's Pick