In the most mom move ever, Field retweeted her son’s tweet and also tagged Rippon. Greisman playfully replied to both of them, responding “Yikes.”

Rippon also responded a few days later in an interview with Buzzfeed saying, “Sam, your mom — I admire her,” he said. “And I’m sure one day we’re going to meet! So thanks, Mom.”

Field finally got her wish this weekend — sort of. They may not be dating just yet, but Greisman did find a way to meet Rippon at the 2018 Human Rights Campaign gala in Los Angeles on Saturday. And Greisman, of course, tweeted out of a picture their meeting, aptly captioning the adorable photo “Thanks, mom.”

The playfully outspoken and openly gay Rippon was at the Human Rights Campaign dinner to accept the organization’s Visibility Award for his contributions to the LGBTQ community. Fellow Olympian and openly gay athlete Gus Kenworthy presented Rippon with the award. Both men are two of the first openly gay U.S. athletes to qualify for the Winter Olympics.

“No matter where you have come from or where you are going to, there is someone who looks up to you, and they will find inspiration in your strength of just being yourself,” he said during his speech. “Be a role model. And never forget that you can be someone’s champion.”

You — and Sally Field — can watch his full speech here (if she hasn’t already). 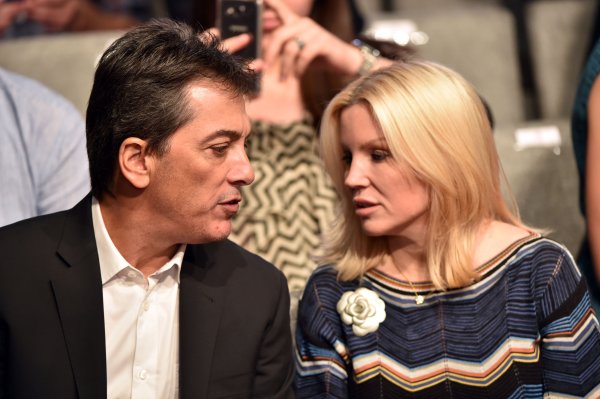 Scott Baio's Wife Renee Has Been Diagnosed with Brain Disease
Next Up: Editor's Pick